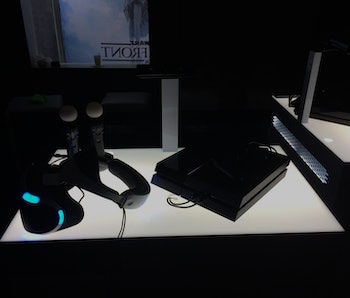 Comic-Con is a drum circle of titanic proportion. An erratic rhythm of publishers and toy companies and studios and TV networks banging loudly, at once, the epicenter of geek culture has everything to offer and overwhelms easily. So allow Inverse to go in-depth with one experience in one corner of the breathing leviathan that is the San Diego Comic-Con. On the first day, we checked out Sony’s Project Morpheus.

I was sold on VR gaming the moment I remembered that sharks encircle prey. “I’m swimming with sharks,” former WWE wrestler CM Punk said on TV once. I remembered that moment, it was just a cool thing to hear a trash-talker say. Suddenly, I wished for that safety again, even though I’m as safe as I can be with Sony PlayStation representatives behind me with clipboards carrying release forms.

A lightweight piece of metal and plastic felt like a sophisticated toy, and it fit loosely on my crown. Headphones were cheap and broken in, at times I was forced to hold one earpiece by my hand if I opted to turn my head. But those little hiccups mattered little, because a goddamn shark was circling me.

This is Sony’s Project Morpheus.

Zachary Levi, of Chuck fame whose Nerd HQ has established itself as an unofficial extension of Comic-Con, brought Project Morpheus (and “Star Wars: Battlefront,” to much glee) to the general public. “Public” meaning if you just so happen to know where and when Nerd HQ was happening. But it’s about as public as it can get.

Sony didn’t demonstrate Project Morpheus at E3. It would be a logistical nightmare to translate the experience on a big stage. The whole point is subjectivity, after all. What matters is what you see, not what you see on a screen. Big difference.

I started with a technical demonstration. It wasn’t a game but a virtual passive experience of surviving a deep dive gone wrong called “The Deep.”

It was horrifying, in that fun way.

Keeping my head on a swivel was the only agency of freedom I possessed. I took full advantage: I looked left, I looked right, behind me, above me, below me, around me. This is a full 3D experience. I could also lean out of the shark cage to some degree, but I wasn’t sure how long I could keep leaning before I headbutted my glass and spilled the mojito I got from the bar.

The immersion, despite having only one control of the human body, was impeccable. I’ve swam with sharks in weird “Call of Duty” missions, and even those blockbuster first-person games couldn’t accurately capture the stress of an incoming great white baring his teeth.

“There’s true potential here for horror games,” I told the Sony rep as the demo ended.

He had something up his sleeve. “Since you mention horror…”

I saw the home interface change right on my eyes like Minority Report as he selected the next demo they had: “Kitchen.”

It was horrifying, in that actually horrifying way.

A combination of Saw and “Resident Evil,” I awoke in a dilapidated kitchen with my hands tied before me. A man in a suit lies before me, delirious, terrified. We’ve been kidnapped, somehow. And we need to get out, somehow.

I don’t trust him. I don’t know who he is. But he gets a knife to cut my ties, the knife shining under the weakly-lit fluorescent light. It comes dangerously close to my face, and I find myself leaning and stretching my arms away so I don’t get sliced on my cheek. We hear a sound. A woman shrieking.

I see her, dirtied and zombie-like with a mouth frozen in a scream, rise behind him.

What follows is a terrifying power struggle. It was a blur I can’t even remember, and revisiting the experience on YouTube is immensely diminished. But she stabs him, he tackles her, she kills him, and she disappears.

I’m left on my own until the stranger’s head comes rolling in front of me. The blood reflects the light. I try to kick it away, but there’s nothing I can do.

Eventually she comes back, because of course she will. The demo milks the immersive nature as much as it can; she lingers with the knife on your lap for an uncomfortable period. I try desperately to channel the Jackie Chan moves from movies I loved in a safer time, but my hands are still tied. I do nothing, even as her bloody hands cover my eyes and smear my vision, and her knife finds its way into my chest.

Suddenly, I’m back in the backroom of Nerd HQ. I hear Pitbull and Ke$ha yelling timber as I talk to the Sony reps, smiling and gushing about the experience. We talk about Project Morpheus’ application to other fields beyond gaming — it’s possible, but not quite there yet — but, on the inside, I’m still strapped in that chair or stuck in that cage underwater, wishing I were safe.

I thoroughly enjoyed and savored the rest of my drink that beautiful afternoon.