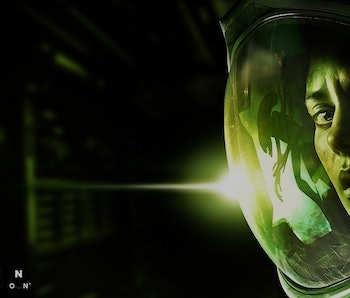 As a tabletop gamer whose flirtation with video gaming petered out when Curse of Monkey Island got the better of me, I’m currently without a console. Trailers for Alien: Isolation had me counting pennies to see if I could conjure up enough scratch to experience a whole new adventure within one of my favorite franchises. Desperate for the necessary tech, but without the means, I scoured the web discovering countless play-throughs of the game’s major cut scenes combined with its key story elements. All was not lost.

Here’s the rundown. Between the events of Alien and Aliens, Ellen Ripley sleeps for 57 years. It’s during this period in which the game takes place, a tactical single-player game that’s picked up shedloads of awards for its marriage of bone-chilling horror and survival-oriented gameplay. Like its predecessor Aliens: Colonial Marines, a shoot-‘em-up that 20th Century Fox officially considers canon, Isolation exists within the established stories of the cinematic universe.

Fox handed over a wealth of storyboards, visual aids and previously-unreleased artwork to developers Creative Assembly, giving a thumbs up to their decision to reintroduce a previously-overlooked character from the Alien universe; Ellen Ripley’s daughter Amanda. Xenomorph or no, her appearance in itself is an enticing prospect.

Isolation begins 15 years after Ellen Ripley blasts the alien out of the “goddamn airlock” and hunkers down for an unusually long nap. Her daughter Amanda, an engineer working for Weyland-Yutani — the same company that sent the Nostromo crew to their deaths — is invited to accompany a small crew out to the Sevastopol space station to retrieve the Nostromo’s salvaged flight recorder. Desperate for closure concerning her mother’s disappearance, she accepts. She arrives at Sevastopol aboard The Torrens, a courier ship, to find that the space station is seriously unstable. This is an alien game — of course it is! Once inside a rambling chap named Axel informs her that a monster is on the loose and promptly gets himself killed (in a nice homage to Brett’s demise in Alien.)

What follows is a compelling spinoff that places you slap bang in the middle of Alien’s shabby retro-futurist chic. With all of Fox’s archival materials at their disposal, Creative Assembly borrows heavily from the visual decrepitude of Scott’s original movie. Circular padded corridors lead to murkily-lit control chambers. Keycards are the most advanced tech as characters tap away at battered consoles. This is the same world Ellen Ripley and her cohorts existed in before they ever encountered that damn alien.

These little nods to the film franchise further secure Isolation into the canon. Quite simply, it’s as if we’ve been here before. The Sevastopol station’s corridors littered with Badejo brand cigarette butts reference the actor who first donned the alien suit. Drinking birds spotted in Alien and Aliens swing back and forth on consoles. Ripley wears the same dual-screen watch as her mother. The unmistakable blip of Hudson’s motion sensor alerts you to the xenomorph’s proximity. Keep your eyes peeled for a cheeky Blade Runner easter egg too.

Naturally, comparisons can’t determine quality or relevance. It’s fun to point out where the game crosses over with recognizable parts of Alien mythology, and yet there’s areas of deviance where lore is perhaps forgotten as the game’s design evolved. When it’s revealed that the Anesidora captain Marlowe brought his facehugger-victim wife aboard Sevastopol there’s no mention of whether or not the thing she births is a queen. “Right from the start, the thing we were trying to achieve was to let the player experience what it’s like to confront Ridley Scott’s original Alien,” Creative Assembly’s Al Hope says, and for the most part the team set out to pit players against one creature. So where does the huge Alien nest come from that Ripley discovers near the reactor? (This could imply that the game follows Ridley Scott’s original plans for the beast’s lifecycle wherein victims slowly morph into eggs.)

Evaluating the story and characters — separate from the pros and cons of Isolation as a game — it’s Amanda Ripley’s presence that’s a must-see part of the series for fans. All that was known about her in the past stemmed from a deleted scene in James Cameron’s 1986 sequel, where we learn from the mouth of Weyland-Yutani paper pusher Carter Burke that Amanda died of old age on Earth many years ago. We’re led to believe that she had a normal existence while her mother sauntered through space in hyper-sleep, but now we know different. She led a life that wasn’t all that different from her mother’s. Says Al Hope:

“I don’t think we are [rewriting Amanda Ripley’s history], In Aliens, the Director’s Cut, the information you receive [about Amanda’s life and death] is from Burke, who proves not to be a particularly trustworthy character, anyway. He needs [Ellen] to return. In a way he needs her to not think she has anything to live for, or any reason to not go back with them. Also, because we’re taking place 15 years after the first film, even if what he says is true, Amanda still has a life. So, we don’t think we’re rewriting anything.”

Where Aliens: Colonial Marines sprung Hicks from the grave through some pretty shifty plot contrivances, Isolation’s ambition to reinstate Amanda Ripley into the saga is a world apart. Burke’s a slimy toad whose self-serving pursuits on behalf of The Company align with this retconned plotting. He did trap Ripley and Newt in a room with a facehugger, remember. And better yet, this marks the first time Sigourney Weaver agreed to work on an Alien game, another part of connective tissue that sent shivers down my spine.

Watching the story play out through the decisions of a stranger might have been stifling had it not been for the brevity of the video I selected. At just under two hours, the experience was akin to viewing a choose-your-own-adventure style movie with someone else’s choices steering the narrative. For the purpose of extracting plot points and character details it did the job, creating a worthwhile chapter in the saga.

By the game’s end I was longing to find out more — of which we no doubt will in a sequel - but moreover, the success of Alien: Isolation makes for an intriguing argument: What if Fox had never sanctioned Prometheus or the Alien v. Predator installments and instead pushed forward with a live-action movie of Amanda Ripley’s survival tale?

More like this
Entertainment
6.30.2022 1:00 PM
'Strange New Worlds' writer explains that horrifying 'Alien'-inspired Star Trek canon change
By Ryan Britt
Culture
6.19.2022 10:30 AM
5 years ago, Ridley Scott made his biggest sci-fi mistake ever
By Alex Welch
Entertainment
6.18.2022 11:30 AM
10 years ago, the weirdest vampire movie ever defied expectations
By Jeff Spry
Share: