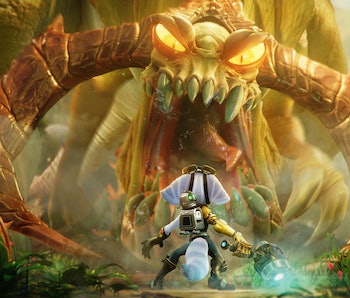 Ratchet’s latest adventure in Ratchet & Clank: Rift Apart sees the intrepid Lombax cross paths with new pals and foes, many of them counterparts to ones found in the original series. These new characters include another Lombax named Rivet, a robot named Kit, Captain Quantum, and Emperor Nefarious.

Will Rift Apart be the last time we see this new and improved cast? Is this the end of Ratchet & Clank, or the beginning of a whole new adventure?

Here’s exactly what happens in the ending and how the additional mid-credit scenes play into a possible sequel.

What are your favorite games and platforms of 2021? What future releases are you most excited about? Take our poll!

Rift Apart closes out with a fight against both the recurring series villain, Dr. Nefarious, and his counterpart from Rivet’s dimension, Emperor Nefarious. The duo teams up to conquer Ratchet’s home dimension.

Their plans are briefly halted by the combined forces of heroes from Rivet and Ratchet's dimensions. In response, Emperor Nefarious begins to overclock the dimension-breaking device, the Dimensionator, causing the world to destabilize further. Rivet strikes Emperor Nefarious out with her hammer, cracking his cranial shell. Dr. Nefarious then deals the finishing blow, dropping Emperor Nefarious into a portal.

With the threat vanquished, the dimensions return to normal. Rivet and Kit are hailed as heroes. The pair is eager to return to their home dimension, but Ratchet suggests that they make a “pit stop” first.

Ratchet doesn’t precisely name what this “pit stop” is going to be, but we can assume it’s to the dimension where the Lombax race fled to after Percival Tachyon attacked their home. It’s been hinted at existing since the 2007 PS3 game, Tools of Destruction. Ratchet has somehow regularly avoided entering it for the last decade, but this scene hints he’s finally making the jump to the Lombax dimension with Rivet by his side.

If you stick around past Rift Apart’s final scene, you’ll be able to enjoy a slew of mid-credit pictures. Each one gives updates on characters who were and were not seen in Rift Apart.

Firstly, we see Kit and Rivet in their home dimension, toppling Emperor Nefarious’ statues. The video jumps to Dr. Nefarious, who turns the lights off on his office, symbolizing that he has actually retired. Dr. Nefarious pays a visit to his butler Lawrence, showing affection to the latter’s newborn.

As the credits continue, we see more happy families: Trudi and her litter, Plumber and Gary, and Mrs. Zurkon’s family.

The images then shift to juicier details. Ratchet, Clank, and their longtime ally Talwyn Apogee look at a dimensional map together, zooming in on the Lombax archives in Rivet’s dimension.

The credits conclude with Rivet, Ratchet, Kit, and Clank standing together. Ratchet activates the Dimensionator, bringing the quartet through a portal. Presumably, they’re heading to the Lombax dimension together.

Notably, Clank has had his legs fixed. His arm has been replaced by a yellow one, mirroring Rivet’s prosthetic.

Will there be a sequel to Ratchet & Clank: Rift Apart?

It seems likely. Rift Apart set up numerous narrative threads that have yet to be resolved. For example, by exploring the planet Savali you can find 12 audio logs by a Lombax named Mags. They allegedly created the Dimensionator and charted the galactic map that we see in Rift Apart.

Mags’ name isn’t given until the final audio log. Why reveal it at all, if there aren’t plans to build upon it? If there is a sequel to Rift Apart, we’ll likely meet Mags.

Insomniac Games and Sony have yet to announce a sequel to Rift Apart. The 2013 Ratchet & Clank game, Into The Nexus ended with Clank taking the Dimensionator. That plotline didn’t get payoff until Rift Apart. While a Rift Apart sequel is certainly a possibility, it’s most likely a few years away.