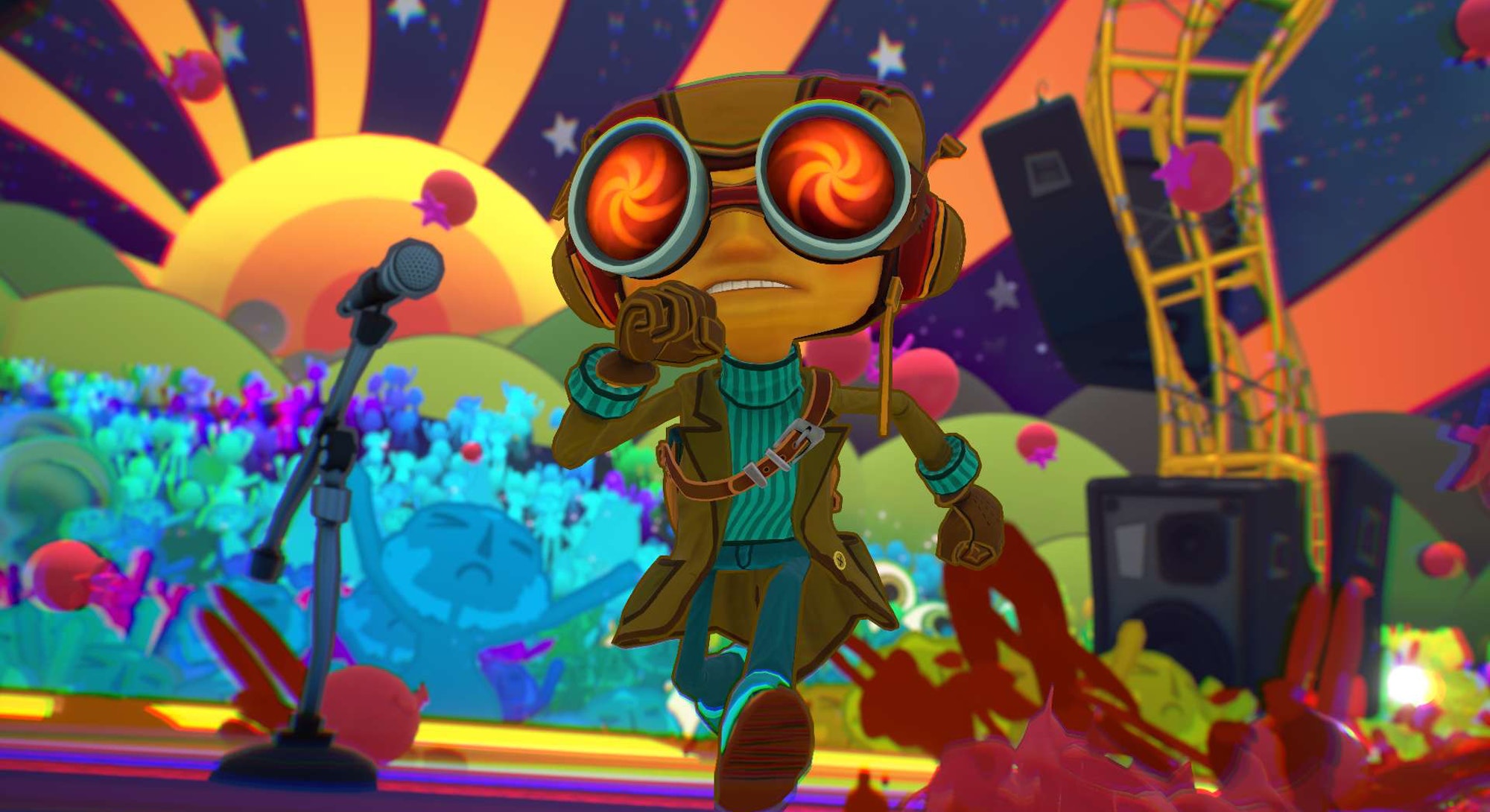 Video games are a vehicle for escapism.

When you’re stressed out, there are few feelings more relieving than getting lost in a video game world that’s not afraid to be fun, joyful, and a little bit weird.

Few developers are better at achieving this balance than Double Fine. Known for games like Brutal Legend, Broken Age, and The Cave, the now Microsoft-owned studio consistently crafts games with a distinctively weird but vivacious charm and tone. For Studio Head Tim Schafer, these games are a perfect reflection of the team’s nature.

“It’s a wholesome team, and that style is just our taste,” Schafer says. “There’s no right or wrong answer about what you can put out into the world.”

With Psychonauts 2, Double Fine follows up a 16-year-old game that tackles serious mental health issues but does so in a way that’s uplifting rather than scary. Psychonauts has resonated with a large and passionate community, and that’s because Double Fine put in the work to make a healthy community.

Double Fine is a studio that champions creativity and positivity over anything else. Schafer, Art Director Lisette Titre-Montgomery, and Senior Systems Designer Lauren Scott spoke with Inverse about how the studio applied that mentality (pun intended) to Psychonauts 2 ahead of the game’s August 25 release.

Schafer describes Psychonauts 2 as humanist because it discusses people's moral and philosophical agency so that it does not punch down toward any specific group.

“No one on the team would be comfortable with the kind of humor that punches down and belittles people,” he explains. “So naturally, there’s a love for humanity and the human condition and empathy for what everyone’s going through.“

That’s clear right from the start as players investigate the mind of Dr. Loboto, a dentist who kidnapped Truman Zanotto, leader of the Psychonauts, a group of operatives that go into and fix problems in people’s minds. What initially seems to be a drab office-level into the gravity-bending mind of a dentist filled with teeth.

Raz, Lili, and co. are constantly craving jokes at one another, and joyful creativity not found in many games anymore is instantly on display. Still, there is a tragedy behind Dr. Loboto’s situation, as he really can’t seem to remember who manipulated him and why he kidnapped Truman.

Being lighthearted and cheerful doesn’t mean that Double Fine is oblivious to the issues people are dealing with. In Psychonauts 2, you’ll encounter characters with anxiety, depression, multiple personality disorder, and alcoholism.

During Psychonauts 2’s development, Double Fine worked with Take This, a non-profit advocating for better mental health representation in games. As a result, the game opens with a content warning about the mental health issues the game tackles and encourages players to visit Take This’ website to learn more about the topics covered in Psychonauts 2.

From a writing standpoint, Schafer prioritized respectful portrayals of the issues the characters face. However, the game also gives a positive outlook for people battling those inner demons, as Raz leaves their minds in better shape than he found them.

“Raz is a very resilient and optimistic kid brought to life by Richard Horvitz in this really indomitable way,” Schafer says. “He bounces back from all the things that he goes through and also has an innocence about him. When he goes into these really adult situations, he sees the positives in those things and is very solution-oriented.”

Double Fine articulates these themes through the game’s aesthetics and level designs, as well as its story and dialogue. Titre-Montgomery and Double Fine’s other artists designed enemies that would be literal manifestations of concepts like doubts and regrets that look surprisingly apt. Every level also has a unique, bright color palette, which occasionally reaches euphoric highs.

Double Fine focused on matching gameplay with the narrative. For example, a level set in the mind of a man named Compton who deals with extreme anxiety has players participate in a timed cooking competition so they can feel the same pressure that Compton does. In turn, the game then shows how you can overcome that struggle in a positive manner.

“As they’re playing, players should ask themselves similar questions that the character is asking themselves narratively,” Lauren Scott says. “It’s the best-case scenario when you can merge those two things.”

The team at Double Fine added what Scott describes as a “salad bar” of accessibility features to ensure the game can be enjoyed by more people, including an invincibility toggle, easier combat, and fall damage removal.

“People should be able to have whatever experience they want to have when they play a game,” Schafer says. There’s no reason to exclude people based on your feeling that they're enjoying your game wrong.”

“Whenever someone responds to creativity with creativity, it feels great,” Schafer says. In addition, the Psychonauts community has shown a staggering enthusiasm for the game and the team behind it. The sequel exists because Double Fine raised over $3.8 million via a crowdfunding campaign on Fig, and fans have been eagerly awaiting to see more since.

Double Fine’s developers showed great appreciation for interactions with their fans during our discussion. They discussed everything from small moments like a grocer recognizing Titre-Montgomery's shirt and striking up a conversation to meeting hordes of fans at PAX, an indie-focused gaming event.

“Some levels sometimes hit people hard because they go into a topic that is similar to their life,” Schafer says. “A lot of people told us about times that the positive work that Raz did in the brain meant a lot to them.”

“The ones that always stick with me are the cosplayers,” Schafer says. “There was a time when three G-Men came up to me at PAX. You look at the love put into that costume and the creative expression. It's such an honor for them to show up in the costume from your game, and that happens every year at PAX.”

Looking ahead, Schafer, Titre-Montgomery, and Scott want to see fans cosplay Lizzie, a goth intern who heckles Raz throughout the adventure. It would be a complicated costume with many trinkets and bracelets. Still, the developers are eager to see someone pull it off.

Few games spark excitement and joy like a new Double Fine title, and the studio’s positive and collected approach toward making games looks like it will pay off once again with Psychonauts 2.