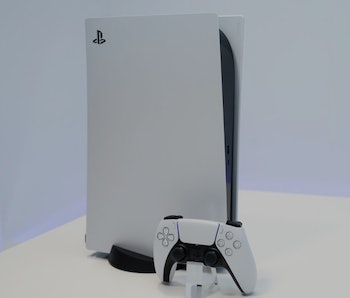 While western gaming outlets have yet to experience the PlayStation 5 in hands-on previews, Sony invited a lot of Japanese outlets like Famitsu, 4Gamer, and AV Watch to see the console in action and play games like Astro's Playroom and Godfall. Overall, the early impressions for the system are mostly positive, with outlets commending its impressive design, how well it runs games, and how quiet it is compared to the PS4.

The PS5 is big but beautiful — All of the PS5 previews took the time to highlight the system's futuristic design. While the system has garnered some criticism for looking a bit too much like a router, those who saw the system up close and personal didn't criticize the size.

Dengeki Online, Famitsu, 4Gamer, and AV Watch all pointed out the system was surprisingly large and will take up a lot of space.

Despite the console's large size, 4Gamer claims that its curved design made the system look slim from just about every angle.

Dengeki and Famitsu also both pointed out the system stays remarkably cool when playing games, which is an improvement from the PS4 that can overheat quite easily with more demanding titles. These early impressions indicate that this futuristic direction for the design might prove beneficial for the next-gen console.

The system and games load very quickly — After going hands-on with Astro's Playroom and Godfall, these outlets all also praised the speed of the PS5.

Like the Xbox Series X, improvements to the SSD means loading times are drastically decreased, even for next-generation games. Famitsu claims that "load stress" is finally eliminated and that this improvement should be super-beneficial for PS5 players.

Dengeki Online also praised this feature and believes that decreased loading times will encourage players to explore every facet of games because they will only have to ever wait a few seconds on a loading screen for fast travel. If you want to get an idea of just how fast the PS5's loading times are, check out the video below showing just how quickly Astro's Playroom loads after a player's death.

PS5 is extremely quiet — While the PlayStation 4 can sound like a jet engine about to take off when it's running a more visually intense game like Final Fantasy VII Remake or The Last of Us Part 2, many of the PS5 previews praise just how quiet the new console is.

One reason for the PS5's seemingly strange design is that it has a large fan inside to keep the system cool, as was pointed out by 4Gamer.

Because of this, the system doesn't overheat, and therefore stays extremely quiet while playing. As was translated by Video Games Chronicle, Dengeki Online called the system "exceptionally quiet" and claimed that "the quietness of the fans was more impressive than the loading times."

The Inverse Analysis — These early previews of the PS5 don't reveal anything too mindblowing, but they do indicate that Sony is delivering on many of its next-gen promises, with the biggest improvement coming in the form of improved loading times.

While the system is a bit large and intimidating, its sleek design also results in a piece of hardware that doesn't overheat and is remarkably quiet for a video game console.