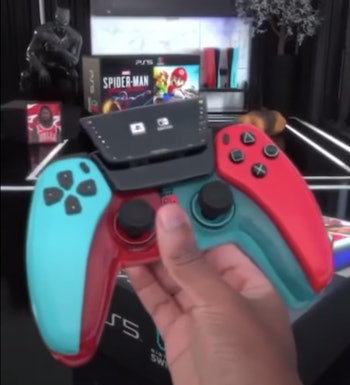 Something’s gotta compete with Xbox Game Pass, right? A fan-made render depicting a colorful mashup of the PlayStation 5 and Nintendo Switch consoles has resurfaced online, and it’s truly the stuff that nerdish dreams are made of.

First shared via TikTok by Kashama (@imkashama) in November 2020 and recently recirculated by a YouTube admirer, this render depicts a collaboration that will almost certainly never happen in real life, but is awfully fun to think about. Imagine a world where you could play a handheld version of The Last of Us Part II on the go, or experience all the nifty features of the DualSense controller during a heated bout of Mario Kart 8. That world only exists within this 12-second video. Soak it in.

The controller’s form factor borrows heavily from Sony’s DualSense. But in lieu of showing off the PS5’s haptic feedback and 3D audio, Kashama’s riff on the consoles adds a few new features, like an expanding grip and a sliding, high-resolution touch-screen display in place of the regular old touchpad. The controller colorway takes a cue from the iconic turquoise and apple red of the Switch Joy-Cons, while also gesturing toward the era of translucent candy-colored N64 consoles in the late 90s.

It’s easy to miss on a single viewing, but in the rear of the shot, you can see two vertically oriented PS5 consoles, both bearing bold red-and-blue Nintendo coloring to match the controller. It’s quite a dramatic difference from the spare look of Sony’s standard-issue PS5.

Kashama’s amassed 1.2 million followers on TikTok for the PS5 Nintendo fusion and similar renders of dream-fodder console ideas and collabs between major electronics brands. The PS5/Switch video has been viewed more than 10 million times on the platform, but it’s not even Kashama’s most popular gaming post. That honor belongs to a rendition of an Xbox handheld, with a folding format that evokes a beefier Nintendo DS, with more than 35 million views. His most recent gaming upload, from early April, features a re-imagined, retro-futuristic rendition of Nintendo’s Game Boy, with an irregularly shaped full-face display reminiscent of the form-factor of the Game Boy Advance.

While this fantasy collab between Sony and Nintendo isn’t something gamers can expect to see soon — or probably ever — recent months have brought us a number of remarkable team-ups, like Microsoft buying Bethesda’s parent company ZeniMax and Xbox securing the rights to offer MLB The Show 21 on Game Pass on launch day. So never say never.