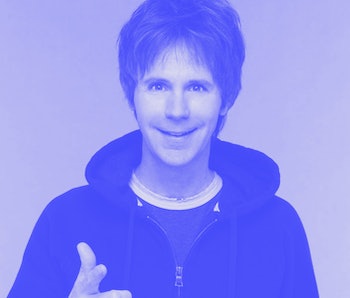 Gamers the world over finally have gotten their first look at Sony's next-generation console, the PlayStation 5. Well, kind of. Much of the spec-heavy presentation flew over the heads of the eager gamers tuning in to the presentation live stream (and hopefully hear about some PS5 launch titles or backwards compatibility).

However, the biggest takeaway from the event on social media seems to be that PS5's lead system architect, Mark Cerny, looks an awful lot like Dana Carvey.

The PS5 reveal presentation was intended for Game Developers Conference, originally slated to take place in San Francisco March 16-20. Like so many events worldwide, GDC was canceled this year due to the coronavirus pandemic, and many of the planned panels and announcements have been taken online instead. Earlier this week, Microsoft revealed a full rundown of Xbox Series X, which also had a highly technical focus. (For a full rundown of everything revealed in Cerny's presentation, go here.)

Cerny opened the presentation by saying launch games wouldn't be revealed until later, a tough break for those of us eagerly awaiting a GTA 6 tease or a God of War 5 announcement. On PlayStation's official YouTube page, gamers were unimpressed with the dry recitation of technical specifications.

As viewers zoned out, many of them retreated to social media to share a common observation: Mark Cerny looks an awful life like Dana Carvey, the comedy icon who rose to fame on Saturday Night Live and remains closely associated with characters like the Church Lady and Garth from the Wayne's World movies.

Here's a few chuckle-worthy memes that rose to the top of our feed during the presentation:

To be fair, there's more than a passing resemblance between these two guys. They do look a hell of a lot alike. But it's fair to say Carvey might have been more entertaining to the audience of eager gamers tuning in from all over the world.

While the presentation didn't show the console itself, Cerny opened by touching on Sony's past missteps with PS3, which became notorious among developers for hardware that was difficult to work with. He said the feature "most requested by the developers" was a solid-state drive, which would make load times 100 times faster. The aim here is to put an end to the tendency to "design around slow load speeds," thereby reducing the need for fast-travel workarounds and twisty-turny level design meant to limit players from outpacing the hardware's load speeds.

Cerny says the PS5 allows for loading games "so blindingly fast we might even have to slow that transition down." But Twitter's ability to generate dank memes might be even faster.

Frankly, we were hoping to see Sony show a bit more ankle in this presentation. We didn't even get to see the design of the PS5, while Microsoft revealed the Series X back in December at The Game Awards. Even knowing that this panel was originally intended for an audience of technically literate developers at GDC, Sony still had time ahead of the presentation to make it a bit more engaging for a general audience. PlayStation had to have known that this stream would attract a lot of eyeballs, and failed to seize upon the opportunity to dampen the hype surrounding Series X.