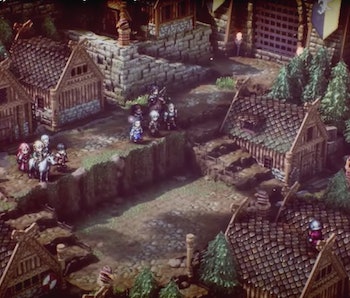 The February 17 Nintendo Direct was a red-letter day for fans of Japanese games. Among the standout announcements of the long-awaited stream was the new tactical RPG from Square Enix, tenatively titled Project Triangle Strategy. If you have fond memories of Shining Force, Final Fantasy Tactics, or yearn for more of the classic Fire Emblem games on Switch, this upcoming title is one to watch.

Here's everything we know about the intriguing new epic, Project Triangle Strategy.

When is the Project Triangle Strategy release date?

Nintendo and Square Enix did not announce a firm release date for Project Triangle Strategy, but did reveal that the game is slated to release in 2022. Watch this space!

Is there a demo for Project Triangle Strategy?

Yes! On February 17, Nintendo and Square Enix revealed that a demo of the game would be available the same day as the Nintendo Direct. At the time of this writing, it hasn't actually shown up on the Nintendo Store just yet, but we expect it'll be up in a few short hours.

Is Project Triangle Strategy a sequel?

Despite the game's visual resemblance to both Final Fantasy Tactics and Octopath Traveler, it's not a sequel to either, but a standalone story. The game is developed by the same Square Enix team that made Octopath Traveler, with detailed 2D sprites traversing an intricate 3D world that's clearly inspired by some of the developer's classic role-playing epics from the mid- and late-1990s.

Judging from the trailer and footage revealed during the February 17 Nintendo direct, your choices will determine the outcome of the narrative, and which characters join your party as allies — and presumably, who you'll challenge on the battlefield.

Is there a trailer for Project Triangle Strategy?

There sure is! The game was first revealed during the February 17 Nintendo Direct. Here's the brief initial trailer that accompanied the more detailed rundown of the game:

What kind of gameplay is the focus of Project Triangle Strategy?

Project Triangle Strategy is a tactical role-playing game. That means that story chapters will be punctuated by lengthy turn-based battles where you'll command a variety of kinds of troops to victory against opposing forces, navigating potentially inhospitable terrain as you go.

In combat, you'll move your characters on a grid. Nimble characters like mounted knight will be able to traverse long stretches in a single turn, while lumbering warriors with heavy armor will take a longer time to move around the battlefield. You'll need to balance sending out an advance wave without leaving your main damage dealers too far behind, along with protecting your more delicate ranged fighters like archers and mages.

What else do we know about Project Triangle Strategy?

If the brief official trailer above wasn't enough to whet your whistle, there's a more detailed rundown of what players can expect from the game below.