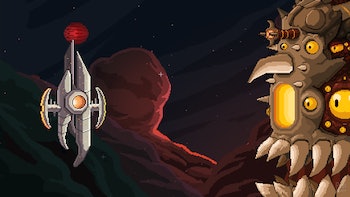 Space. The final fun-tier. Video games have taken to the stars for action and adventure since 1962’s Spacewar! And considering the Venn diagram of sci-fi fans and gamers is basically one circle its no surprise space dominates the settings of some of our favorite games. Mass Effect. Dead Space. EVE Online.

But there's one title that encompasses everything a sci-fi fan wants in a game that remains tragically overlooked. It's got exciting ship combat. Alien invasions. Intergalactic political intrigue. The fate of humanity resting on the shoulders of one intrepid captain (you). And, until February 18, this game is totally free on the Epic Games Store.

I'm talking about Halcyon 6 from Massive Damage. This tactical RPG space-sim is currently free on the Epic Store until February 18, giving you just enough time to hop in for a three-day weekend of tactical splendor, meticulous resource management, and a hearty dose of nihilistic humor on par with Galaxy Quest.

Before you keep going: How did gaming get you through the pandemic? We want to hear from you! Take this quick Inverse survey.

What makes Halcyon 6 such a stand-out title? In a word, balance. There is just enough of everything without there being too much of anything. The gameplay itself is essentially split into three components. You have a resource gathering/base management aspect along with turn-based combat in both spaceships and as landing parties and, finally, managing your base and crew of captains.

The premise of the game revolves around you as leader of the sole surviving human community (think Battlestar Galactica) aboard Halcyon 6, an ancient space station capable of manufacturing powerful space ships. In order to build ships, you need resources. So you send little shuttles to various planetoids and cosmic flotsam in your galaxy to harvest materials and deliver them to Halcyon for processing. You need captains for the ships so you train them at your base and also earn valuable XP in battle. It’s a delightful little cycle of needing resources, building ships, training captains, then needing more resources for better ships and stronger captains and so on.

One problem - the Chruul. Your typical snarling space monsters, the Chruul are an invasive collective hellbent on total destruction of everything. And they’re coming, fast. They want to destroy Halcyon 6 and much of the game revolves around you preparing for increasingly difficult waves of Chruul invading your galaxy. Combat strategy runs deep and you’ll need to pay careful attention to status effects and stacking various buffs to survive.

The Chruul are not the only threat you’ll encounter. There’s a wide range of colorful intergalactic factions that you can work for, work with, or work against. The dialogue with these groups is where the game really shines, with some of the funniest writing I’ve ever encountered in any game, ever. It elevates what is normally a “hold X to skip” level of RPG dialogue into something you genuinely look forward to. Even your responses are dynamic and add a lot of sardonic flair to these interactions.

The free version of Halcyon 6 available on the Epic Store this week is the “Lightspeed Edition,” a revamped release of the original game that contains oodles of quality of life improvements that really reduced the level of grind in the game. Per the developer, you can complete the game in ~15 hours now, although that’s easier said than done. And, if you’re a grind simp like me you’ll spend way more hours than that making sure you visit every single speck of spacedust in your galaxy before completing the next big research project that inevitably triggers the next phase of the game.

Is Halcyon 6 for everyone? No, obviously not. If you’re not into turn-based combat or don’t have any nostalgic attachments to retro-style pixels you won’t get much from this title. But if you’ve ever earnestly flashed a Vulcan salute or brought a folding chair to sit on line at a Con then you’ll almost certainly find something to love about this game. It’s worth your time and, for the next week, absolutely worth none of your money, too.