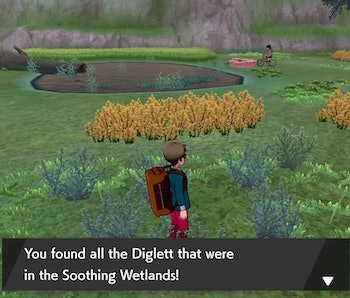 One of the most important tasks given to players in Isle of Armor, the first major DLC for Pokémon Sword and Shield, is to help a Pokémon trainer from Alola find all 150 of the Blonde-headed Diglett that he's lost. They're buried throughout locations on Isle of Armor.

We've provided a list of 20 discoverable Digletts available in the second Isle of Armor location, the Soothing Wetlands. Be on the lookout for the buried Digletts while exploring and/or reference this list that includes them all. We'll make sure you're oriented by using landmarks by the Digletts, and we've also included a map to help pinpoint the locations.

To spot an Alolan Diglett hidden underground, look for their three iconic blonde strands of hair. Despite their body being buried, the hair will always be visible poking out of the top. (The above example demonstrates what it'll look like.)

Now how do you find the 20 Diglett in the Soothing Wetlands? You can use this map, with every location marked or you can follow our itemized location list, found directly below the map.

Diglett near the Field of Honor entrance and Brawler's Cave.

20. By the left of the entrance near a skinny tree and green shrub.

19. Behind the round lake on the west side containing a Pokémon Den. Adjacent to yellow grass.

18. Closer to the Pokémon Den in the lake, there will be a Diglett next to two rocks

17. Right before the curve to Brawler's Cave, adjacent to red flowers and "x" marks in the grass. A Lake with a log should be nearby.

16. Near the lake with the log inside, there will be some yellow grass and a single tree.

15. You should see two logs overlapping with some yellow grass nearby. Look around it to find a Diglett.

14. Ahead of Brawler's Cave, you should see five shrubs in a pentagonal shape and "x" marks in the grass around it.

Diglett near the large river and Forest of Focus entrance

13. By yellow grass to the left of the entrance.

12. Head slightly west to the open space. Diglett is by two small rocks and some yellow grass

11. Moving closer to the large river, there will be one between a large rock and "x" marks in the grass. Some red flowers are nearby as well.

10. Move closer to the large river. You'll see five closely placed skinny trees with red flowers nearby. Diglett will be between them.

9. On the large river's shore, there will be a patch of red flowers with "x" marks in the grass.

8. Go to the west-most side of the river, and look by some red flowers to spot a Diglett.

7. Next to the tree on the circular lake's small island.

6. Between yellow grass and some "X" marks right next to the circular lake.

5. West of the circular lake, between a skinny tree and red flowers.

4. East of the circular lake, after a patch of tall grass, there will be some yellow flowers close to a Diglett

3. North of the circular lake, there's a smaller half-Pokéball shaped lake. By it, there will be some yellow grass with a Diglett nearby.

2. A trainer next to a berry tree by the half-Pokéball lake, ahead of them, there's a red flower patch containing a Diglett.

1. Close to a log that's pressed against a cliff in the area's southern section. Some yellow flowers are nearby.

For every Diglett collecting milestone you hit, return to the trainer and he'll reward you with a unique Pokémon from Alola that's otherwise impossible to find in Sword and Shield. There's also a chance to get an Alolaian starter like Rowlet, Litten, or Popplio. The one you get is determined by the starter you chose in Sword and Shield.

Pokémon: Isle of Armor is available now for Nintendo Switch