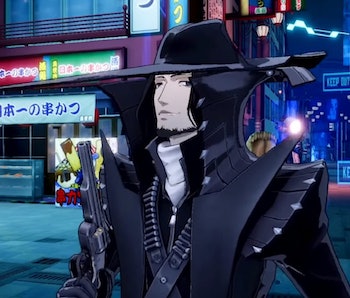 The main narrative conceit of the Persona series has always been a group of teenagers against the world, using an adolescent protagonist to explore weighty topics like society’s power structures and inequality. While teenage heroes are absolutely an overdone trope in JRPGs, Persona always finds a way to elevate its teenage heroes. The main party of Persona 5 is all incredibly well-written, but the most thematically interesting party member actually comes from the action-focused spinoff, Persona 5 Strikers. Zenkichi Hasegawa is a police inspector turned Phantom Thief, and he might be the most interesting character the series has ever created.

If you’re unfamiliar with Strikers, it takes place four months after the events of Persona 5, with the protagonist traveling back to Tokyo to spend his summer vacation with the Phantom Thieves. While planning a trip across the country, the group ends up smack dab in the Metaverse yet again, and has to put their vacation on hold to save society.

While investigating these new Metaverse appearances, the Phantom Thieves are approached by Zenkichi, an officer working for the Public Security Intelligence Agency who’s investigating the “changes of heart” people have had over the last year, as well as the new incidents.

Zenkichi is, at first, an antagonistic figure to the party, someone whose motivations seem right in line with the likes of Sae or Akechi. As you interact with him more, it quickly becomes apparent that Zenkichi knows exactly who the Phantom Thieves are, and he is using them to his own ends to forward his investigation. The two parties create a shaky alliance, but this is where Zenkichi’s character really starts to shine.

Zenkichi is wracked with grief at being unable to solve the mystery of his wife’s murder years ago, which in turn has also led to his daughter, Akane, developing a deep distrust for police and authority. His grief has pushed him to become an extreme workaholic, further widening the gap between him and his daughter. What’s fascinating about Zenkichi’s arc is that we see his interactions with the Phantom Thieves start to reshape his worldview, and even call into question his faith in the police and justice system. It’s a compelling commentary on the imperfections in how society pursues justice, but how so many of us simply accept the status quo unflinchingly.

Eventually, Zenkichi does awaken his Persona and becomes a full party member, which makes him the oldest party member in the entire franchise. He fills an interesting role as he’s not growing and coming to terms with his morality like the rest of the adolescent team, he’s someone that’s already set in his ways and has become worldwide.

In a way, Zenkichi had resigned himself to the fact that his best days were behind him, and the grief of his wife’s passing put him in a loop of simply “working toward death.” Again that all changes through Zenkichi’s relationship with his party, as he learns to rekindle his relationship with Akane, and that he still has so much left to live for.

Persona has such a laser focus on youth, and it’s so refreshing to see an older party member that goes directly against the “adults are evil” message that Persona 5 drives so hard. Zenkichi’s character arc is all about realizing that you can still learn, grow, and change no matter how old you are, that self-discovery is a process that doesn’t just happen in our youth, but carries on through our whole lives. These themes have always been at the heart of the Persona franchise, and Zenkichi feels like a practically perfect crystallization of that.

While Zenkichi’s character arc is phenomenal all on its own, it’s also a great joy to see him warm up to the rest of the party, and his dry sense of humor starts to become more apparent as the game goes on. He’s a surprisingly funny and likable character, and Strikers’ strong writing helps uncover layers of his personality.

More than anything, Zenkichi makes the case for how compelling a more diverse cast of characters can be in a Persona game, and if the series learns anything from Persona 5 Strikers, hopefully it's to create more dynamic relationships between the party.