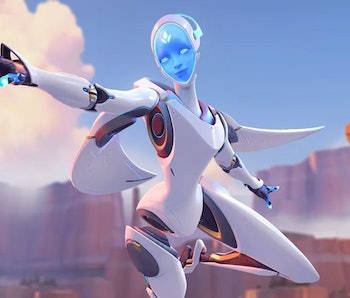 Overwatch's final hero is nearly here. Echo is a robot with a human personality, and she's got a ton of exciting moves, including an ultimate that lets her steal the ability of another character. She will be Blizzard's final addition to the original game before the launch of Overwatch 2. If you're chomping at the bit to hop into some matches as Echo, this is what you need to know about when you can play Hero 32.

When will Echo be added to Overwatch?

Non-Public Test Realm players' wait for Echo is nearly over. Echo's release date wasn't confirmed alongside the hero's reveal; that came last week in a tweet from the official Overwatch account. Hero 32 will join Overwatch today, April 14. This has been the longest gap between Overwatch heroes thus far.

Sigma was added in August 2019, leaving a whopping eight-month gap between heroes. Depending on how long it takes Overwatch 2 to release, the gap between Echo and the next hero could be even longer. Still, after a lengthy wait, Overwatch players are excited to finally have another hero on the roster.

What time will Echo become available?

Wondering what time can you start playing? While Blizzard hasn't shared a release time in an official sense, Overwatch updates typically take place at 1 p.m. Eastern. As such, that is when we can expect Echo to be added. Once you update your game, Echo will show up in your hero queue and you can start playing as her.

Those of you who are out of the loop when it comes to Overwatch may be wondering about Echo's backstory. Echo's first appearance came in Reunion, a Blizzcon 2018 animated short starring McCree and Ashe, and her backstory has been fleshed out since then.

Echo was created by Dr. Mina Liao, the same scientist that created the Omnics that eventually resulted in the Omnic Crisis that took place prior to the start of Overwatch. Echo is a much more benevolent robot though and has grafted some of Liao's personality on to her self.

She's pretty different from any other character on the Blizzard shooter's roster, both in terms of design and gameplay. If you want to know about her, read on for details about her gameplay abilities and why she is the last hero coming to Overwatch.

Overwatch is available now for PC, PS4, Xbox One, and Nintendo Switch.

More like this
Gaming
8.11.2022 1:30 PM
Overwatch 2 is ditching the game industry's worst feature
By Willa Rowe
Gaming
8.11.2022 7:30 PM
You need to play the most delightful management simulator on Xbox Game Pass ASAP
By Hayes Madsen
Gaming
8.11.2022 3:00 PM
Everything you need to know about Kirby’s Dream Buffet
By Robin Bea
Related Tags
Share: