"For now, we will not be getting another Overwatch hero." 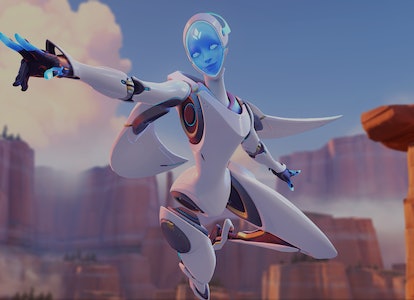 Overwatch has received a steady stream of new playable characters about four months since its May 2016 release, but that cadence will soon come to an end as we get closer to the release of Overwatch 2. Director Jeff Kaplan recently discussed the release of Echo, the 32nd playable Hero that'll soon be added to the game, but he also revealed that she will be the last. Does this mean Overwatch 2 might become the focus and be released sooner rather than later?

Echo will be the only new Overwatch character added to the game in 2020.

"I don't think we'll see more heroes this year for Overwatch," Kaplan said in a March 20 video interview published by YouTuber Stylosa about Echo. "We're heavily focused on Overwatch 2 at this point. We know how much people love new heroes. We are making a bunch of new heroes for Overwatch 2 ... I don't want to get people's expectations up in the wrong place — we will not be getting another Hero this year."

There won't be any other Heroes added to Overwatch, but new Heroes might still arrive when Overwatch 2 launches in 2020.

Kaplan's comments make it clear that Echo will be the final new character added to Overwatch this year as Blizzard pivots to focus entirely on finalizing Overwatch 2. This shift in focus isn't surprising at all considering how drastically the cadence of new Heroes slowed down leading up to Echo. The gap between Sigma, the previous new character, and Echo was the longest in the game's history at about eight full months. We can safely assume that's because all of the people who normally work on creating new characters were already fast at work on the sequel.

To be clear, Blizzard is still working on new characters for the franchise. "We have in development many tanks and supports, so there are more tanks and supports coming for sure," Kaplan also said in the Stylosa interview. That includes Sojourn, who was already confirmed in the initial Blizzcon 2019 announcement for the sequel.

When is the Overwatch 2 release date?

The fact that Echo is the final Overwatch character suggests that an Overwatch 2 release date is on the horizon, but Blizzard has yet to offer any kind of release window.

Blizzard could be aiming to launch Overwatch 2 around the same time as PS5 and Xbox Series X. A deleted tweet in January from PlayStation Brazil seemingly leaked that Overwatch 2 would be released in 2020, though this could've just been a mistake. If the sequel does come out this year, don't expect it until November or December.

As of now, an early 2021 release seems much more probable. For starters, Kaplan's comments in the Stylosa interview that we will not be getting another Overwatch character "this year" suggest that Overwatch 2 and the characters it brings aren't coming in 2020. Kaplan also said during a Blizzcon 2019 panel that "we don't have a date in mind," which probably wouldn't have been case if Overwatch 2 was less than a year out.

Hopefully, Blizzard Entertainment will reveal when to expect Overwatch 2 soon because we now know that Echo is the final character being created solely for the original Overwatch. At the very least, this is a good sign that Overwatch 2 is about to enter the final stages of development.