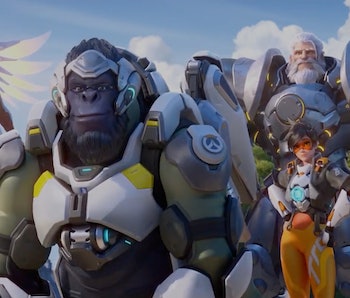 Overwatch 2 was announced at the opening ceremony of Blizzcon 2019 on Friday, providing fans of the online hero shooter with as many questions as answers about the long-rumored sequel. The big news? Overwatch 2 will introduce a notable player-vs-environment element where players team up against computer enemies, a big change from the player-vs-player focus of Overwatch that’s also carrying over. But the biggest question on any fans mind — besides whether their favorite skins will carry over — is what new character(s) will debut with the sequel.

Overwatch director Jeff Kaplan took the stage at Blizzard’s annual conference to confirm that the long-rumored Sojourn as well as “multiple” other heroes would join the Overwatch roster at a later date.

Kaplan and his team have yet to announce their full plan for Overwatch 2, the release date, price, and full list of new heroes remain a mystery. But the upcoming title’s cinematic trailer also revealed that Echo would be joining the cast as well. Much like Sojourn, Echo has also been said to be in consideration as a new hero.

A new era of Overwatch is about to begin and here’s what we know about the new heroes gamers will eventually be able to play.

Everything we know about Sojourn in Overwatch 2

Sojourn was one of the two new heroes that were confirmed to be featured in Overwatch 2. She’s been a long-standing figure in the game’s lore and first appeared in the animated short Recall as well as in Ana’s origin story. She was the captain of the Overwatch organization that Winston has been trying to reassemble and she’ll soon be a fully playable character.

Blizzard has yet to announce her skill set but she’s known to have cybernetic enhancements that we caught a glimpse of in the Overwatch 2 trailer.

She seems like a damage-dealing hero with a massive arm cannon that appears to be multi-purpose. All of the still images we’ve seen of her show that she has extensive robotic enhancements, which could make her akin to Cyborg from the DC Universe.

Kaplan said the Overwatch team won’t be revealing anything else about Sojourn at Blizzcon 2019. So fans will need to continue speculating for now.

Everything we know about Echo in Overwatch 2

Echo was seen at the end of the Overwatch 2 PvE story mode cinematic. Like Sojourn, she’s also appeared in a game animated short and was revealed to be what was being transported inside the Route 66 payload.

The first good look that gamers caught a glimpse Echo was during Ashe’s short film where she faces off against McCree. Plus, Overwatch developer Joshua Noh confirmed that the team was “definitely going to make her a hero at some point,” during an interview in March. And it seems that fans will finally get to play as Echo in Overwatch 2.

The Blizzcon 2019 demo of the PvE story mission Rio de Janeiro features Echo as an unplayable shot caller. She advises Reinhardt, Tracer, Lucio, and Mei through their objectives which suggests she’s a strategist of sorts.

She clearly has the ability to fly and is seen firing a pulse of energy from her hand. Echo could end up being an aerial support character along the lines of Pharah and Mercy, but she might provide the team with crucial information about the enemy team.

Who else could appear in Overwatch 2?

Blizzard has also teased the possibility of Mauga joining the hero roster. The Talon Heavy Assault soldier and former friend of Baptiste was introduced in a June 17 short story titled, “What You Left Behind” that gave fans a glimpse of Baptiste’s past life as a Talon operative. The snippet of lore was part of the Baptiste Reunion Challenge, which gave the Haitian healer his Combat Medic skin while dropping massive hints about Blizzard’s next hero release.

Blizzard fully intended on releasing Mauga as Hero 31, but developers felt his archetype didn’t fit the role they wanted to fill. Associate game designer Noh told Polygon in July that the team wanted to add another beefy shield tank, to compliment Reinhardt and Orisa. Mauga simply didn’t fit the bill.

“We were having a lot of difficulty finding out how he was going to use a barrier, when he’s much more of a close range, berserker, melee kinda guy,” Noh said. So Sigma took his spot.

Noh’s statement clearly suggests that the Overwatch team has put thought into Mauga’s kit, which means he might eventually be included in Overwatch 2 after Sojourn and Echo.

A lot remains unknown about Blizzard’s sequel to Overwatch, but the hero roster is set for some big changes.

Overwatch 2 is expected to be released on PC, Playstation 4, and Xbox One… eventually.