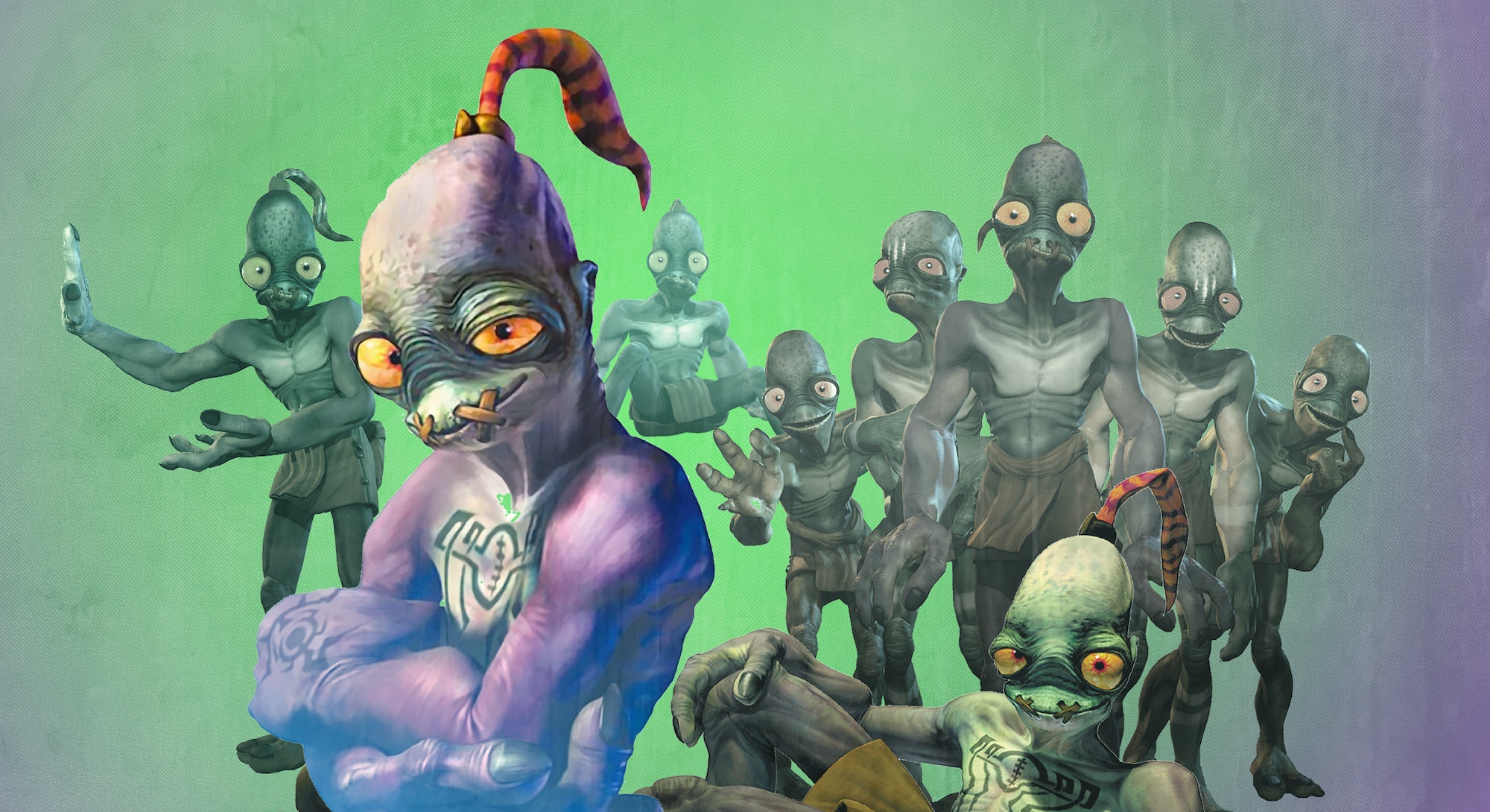 In some people’s eyes, video games are brainless diversions at best.

This is, of course, BS. And while the question of whether games are art is painfully tiresome today, few even thought to bring it up in the PS1 era. But even then, there were games whose very existence were such an emphatic “yes!” that they made even asking the question seem silly.

“This is Rupture Farms”

Though its setting is pure fantasy, the world of Abe’s Oddysee is just a coat of paint away from our own. Junk-food factory Rupture Farms, where the game begins, resembles a colossal oil refinery: a mass of steel pipes writhing beneath smokestacks perpetually spewing smoke. It’s run by a gang of Glukkons, cigar-chomping executives straight out of a corny political cartoon.

Our hero is Abe, a Mudokon who works at Rupture Farms along with seemingly the entirety of his species. As he explains in the intro cutscene to Abe’s Oddysee, he’s actually a slave like the rest of the “workers” there, but given the blurred line between labor and servitude, there’s a hint of pride as he explains he was once employee of the year. Abe even muses about the deliciousness of his favorite Rupture Farms snack products, despite the fact that they’re manufactured using his planet’s endangered species. There’s a touch of sadness in his voice when he mourns the discontinued Meech Munchies, not because the Meeches were hunted to extinction, but because he misses his very favorite munchies.

The intro to Abe’s Oddysee sets the tone for the grim adventure to come.

Abe is the perfect audience stand-in trapped in a post-capitalist dystopia. He knows he has a terrible job. He knows his bosses are destroying the very planet on which he stands. But he doesn’t yet know if there’s anything he can do about it, so he just sort of enjoys what few pleasures he can. Then he discovers the name of a new Rupture Farms product called Mudokon Pops. Its key ingredient? You guessed it. Abe’s entire species. (“It was us!”).

That’s when Abe’s Oddysee hands you the controls, and your first job is to escape Rupture Farms with your life. Over the course of the game, you and Abe discover that some Mudokons have escaped the clutches of Rupture Farms to keep their culture alive. As it turns out, the animals currently being turned into snack cakes have deeper ties to the Mudokons than Abe ever imagined, and they may be the key to dismantling the oligarchy once and for all.

Oddworld came to life in the late ‘90s at a time when critiques of consumerism and capitalism were making their way into mainstream media.

Fight Club and Office Space were released two years after Abe’s Oddysee. So was The Matrix, which took the same direction of turning the real-world horrors of capitalism into sci-fi villains, so even people not amenable to its message might get onboard. Even the way The Matrix depicts the nightmarish “real world” is quite similar to the smog-belching metallic hellscape of Rupture Farms.

In that era, however, the revolution was just coming to video games. While Final Fantasy VII let us play as a group of anti-capitalist eco-terrorists and Fallout embodied a large-scale social critique, the biggest titles of 1997 were mostly pleasant escapist fare like Super Mario 64. The very idea of a mainstream video game with a political point of view was something most players weren’t ready to take seriously. Despite that, FF7, Fallout, and Abe’s Oddysee were among the year’s best-reviewed games, according to Metacritic.

The strong, subversive narrative of Abe’s Oddysee was partly responsible for that praise, but it’s not the only reason it stood out. Critics at the time were captivated by its graphics and art style, which remain a creative achievement today even as they’ve aged. Likewise, its gameplay feels clunky by today’s standards but remains as engaging as it is unique.

In 1997, most platformers were side-scrollers, letting you run across levels as one continuous screen like in Super Mario Bros. By contrast, Abe’s Oddysee is a single-screen platformer, where each screen is like its own mini level to be beaten before moving on to the next.

The very first screen of Abe’s Oddysee contains a secret: Your POV stays at a fixed angle and distance, and from your perspective, there’s a bit of machinery blocking a section of ground from view. If you stop right at its edge and crouch down just as Abe disappears from view, you’ll discover a drop into a hidden part of the level with its own puzzle to solve. How would you know it’s there on the first run through the game? You wouldn’t. Only by scouring each screen for details like this can you be sure you’re seeing 100 percent of Abe’s Oddysee.

Finding those secrets isn’t just about being a completionist. The story of Abe’s Oddysee is that of Abe taking down Rupture Farms, but your real goal is to save the rest of the Mudokons. As you run and jump through the OSHA-violating meat grinders and laser grids of the factory, Mudokon slaves remain at work. Armed guards prevent them from escaping, but you can free them! And only if you save at least half does Abe fully triumph in the ending cutscene. It’s a gameplay conceit that encourages exploration, but it’s also a key theme of Abe’s Oddysee: You can fight the man all you want, but only solidarity with your fellow workers can truly defeat him.

While Abe’s Oddysee rode the rising tide of consumerist critique, it was also part of a wave of comparatively advanced AI in games. Some games were and are content to give NPCs fixed patterns to follow, but the late ‘90s saw games entirely focused on building more realistic AI, like the virtual pet sim Creatures. The Oddworld games used AI to make their worlds feel more alive and build a stronger bond between you and the characters onscreen.

To guide your fellow Mudokons to safety, you needed to call out to them and guide them to either “Follow me!” or “Wait!” with different phrases mapped to different buttons. There was even a command to fart, which served only to make Abe and other Mudokons laugh. Developer Oddworld Inhabitants called this system Gamespeak, and though it was quite simple, it was incredibly effective.

Admittedly, I was an impressionable 10-year-old at the time, but I was elated every time I freed a Mudokon and felt my stomach drop whenever I inadvertently led one to their doom. The moment I finally beat Abe’s Oddysee after freeing all 99 Mudokons (the dutiful child that I was) is forever seared into my memory, more so than most events in my actual human life.

The Oddworld series was envisioned as a five-part saga, which now seems extremely unlikely to ever happen. While the games have remained solid, the sequels just haven’t captured the same right-time-right-place magic of Abe’s Oddysee.

My 10-year-old self would be crushed to learn Abe’s adventures didn’t go on forever and Oddworld didn’t become the most popular series in the world. Maybe it’s better that way, with Abe’s Oddysee remaining a singular masterpiece rather than having its vision ground up and extruded like so many poor Meeches. I’ll remain forever grateful, however, for the first video game to teach me that the medium — and the world — can be so much better, but only if we try.