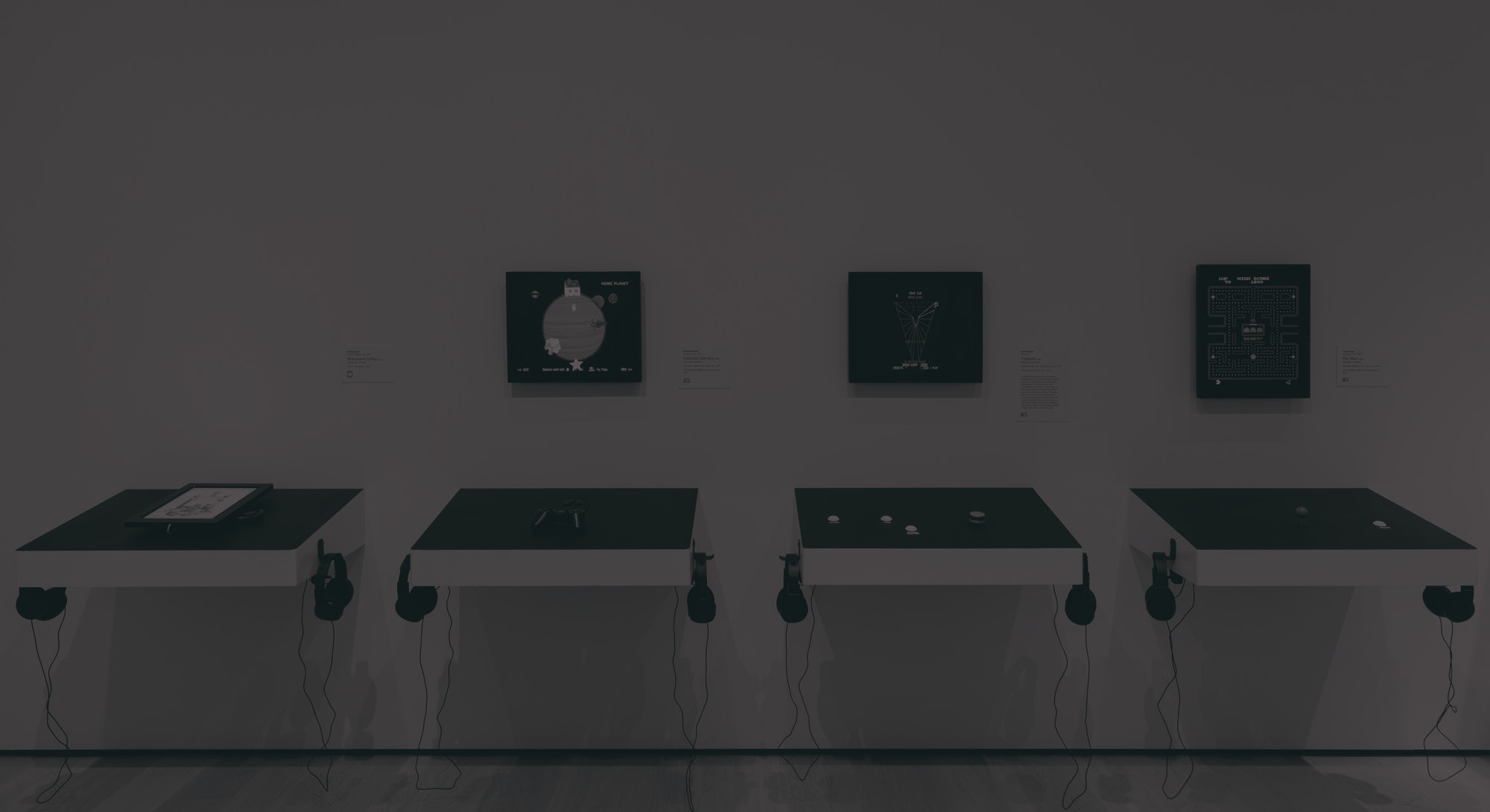 “I've been getting my ass kicked on a daily basis.”

Paul Galloway is the collection specialist for architecture and design at the Museum of Modern Art, and he’s been struggling a bit with Elden Ring, the sensational open-world action adventure from developer FromSoftware that’s a shoo-in for 2022’s game of the year.

Alongside him sits Paola Antonelli, the senior curator of architecture and design and director of R&D at MoMA. She confesses she stays away from games “as if they were Satan.” Why? “If not, I’m going to be sucked in,” she says. We are seated across from each other on a black leather bench inside “Never Alone: Video Games and Other Interactive Design,” an exhibition free to the public opening on September 10.

The collection MoMA has gone to great lengths to acquire is filled with important pieces of game design and history. Each individual game is worthy of inclusion in such an esteemed institution, yet the exhibition’s ambitious commentary on game preservation bespeaks bigger problems in the gaming industry at large. It feels like there’s an ongoing battle between video games and the more traditional art world at play here, but the gaming industry’s crisis of ownership and publishers’ obsession with licensing emerges as a serious roadblock.

A short history of games at MoMA

The Atlantic called Antonelli the “most modern curator” in 2014. This reputation as a transgressive curator in the art world was earned in no small part due to her inclusion of 14 video games in the 2012 exhibition “Applied Design” at MoMA. At the time, this was enough to elicit reactions of clutching pearls from the art world. The Guardian famously — and perhaps callously — published an article titled “Sorry MoMA, Video Games are not art.”

Antonelli assures me that she wasn’t bothered by all that commentary, however. “We’re not thick-skinned as curators — we’re not,” she says. “A bad review can send us into a tailspin. I am particularly thin-skinned, but I was never hurt.”

From Tetris to Portal, the exhibition puts 14 games alongside other art pieces to show how pervasive broader principles of modern design permeate virtually everything. Since the closure of the “Applied Design” exhibition, the original acquisition of 14 titles has only grown. With the newly launched “Never Alone,” the collection has nearly tripled to 36 titles, nearly meeting the initial dream of 40 titles from Antonelli.

In the decade since the MoMA and Antonelli have been collecting games at the museum. The hope is that “Never Alone” can move past the basic and mostly reductive reactions that “Applied Design” received. Antonelli and Galloway believe that their role as curators “is not to tell people what's good and what's bad, but to help them create their own critical sense.”

Are games art? Why don’t you decide for yourself rather than listen to a critic.

Amongst the collection of titles that someone might expect to see in the collection at MoMA are the likes of Super Mario Bros., Legend of Zelda, or Pokémon Red & Blue. Nintendo’s history with gaming is integral to the medium’s success and proliferation on a hardware and software level. Yet of the 36 games in MoMA’s collection, not a single title was published by Nintendo. But it isn’t for a lack of trying.

“I don’t know how many hundreds of emails there have been [with Nintendo],” Antonelli admits with an exasperated sigh. Galloway laughs adding that some email chains are so long that trying to open them crashes Gmail.

The main job of a curator is to acquire pieces that are deemed worthy of preservation by the museum, things of cultural importance. When it comes to video games, this acquisition is exceptionally difficult. The end user license agreement (EULA) between the game owners and MoMA needs to allow the museum irrevocable access to the property. For every game in the collection, MoMA has its source code and when possible, a physical copy of the title. An original Pac-Man arcade machine sits in the collection, for instance.

Most acquisitions in the past decade have been smaller indie darlings. “We found that some of the most fascinating things were indie games like those Lucas Pope, Nathalie Lawhead, and Bennett Foddy were doing and we wanted to reflect that,” says Galloway.

While newer games in the collection like Lawhead’s Everything is Going to be OK or Foddy’s Getting Over It with Bennet Foddy are deserving of inclusion, it is hard to not also see the holes in the collection left by AAA titles. Even when MoMA can acquire larger titles, it is only half the battle. In far too many cases, the source code for some of a publisher’s biggest games somehow gets lost. (Ars Technica estimates that 90 percent of pre-2000 gaming source code is already lost!) So even if the publisher might want to participate, it simply isn’t possible.

Despite these challenges, Galloway is quick to assure me that MoMA isn’t stopping any time soon when it comes to acquiring games from large companies. “We aren’t afraid,” he says.

Jumping through all these hoops has been in service of creating exhibitions like “Never Alone.” So, it is disappointing that the exhibition is restricted to a small alcove near MoMA’s entrance. Of the 36 games in the full collection, only 10 are playable in the current exhibition. It feels like a small curiosity rather than an exhibition of note.

The first game that draws the eye is Pac-Man. Undoubtedly an accomplishment of design, yet a cliche in its use by the exhibition. In his video essay on Pac-Man, games critic Tim Rogers delves into the cliche that “games have come a long way since Pac-Man.” While on the surface this is a factual statement, it is a simplified understanding of the contents and workings of a game, especially the design.

As individual game experiences, each title is worthy of inclusion, yet there is a lack of cohesion or dialogue between the pieces themselves. Whether through the issues of acquisition or a curatorial misunderstanding, “Never Alone” feels like a mismatched collection in service of no larger message.

A dedicated video game exhibit at one of the nation’s most prestigious art institutions inherently gives the medium a validity that is so often not given by the general public. But the exhibition itself leaves one wondering if MoMA is going about this the right way. Gaming is so prevalent in all our lives, just ask Antonelli and Galloway who point out the prevalence of gamified design in nearly everything. Yet traditional institutions lack an understanding of how to engage with them. Just as the New York Times failed to understand what made Elden Ring such an important game in its April 2022 essay, MoMA fails to say something more meaningful with the collection at its disposal.

In both cases, these institutions want to explore the “cool new thing” but are slow to give control over to the people with the expertise to explore gaming’s artistic history by tracing more meaningful throughlines. Antonelli and Galloway are both well-established and renowned curators in the field of architecture and design. While the desire to include games is admirable, this exhibition and collection keep the MoMA crowd in control. But what is it trying to convey?

The conversation around an exhibition like “Never Alone” has grown a lot since the first video games in MoMA ruffled feathers. The discussion is no longer “are games art?” It is about what institutions like MoMA have to say about the art, and how they present it to museumgoers. As an exhibition, “Never Alone” does not engage with this in a way that feels impactful.

Yet MoMA’s willingness to continue to deal with the unique difficulties of video game curation in service of creating a meaningful collection still feels important and admirable. Just like game design, it takes iteration to perfect.

“Never Alone” is not the end of MoMA’s work with video games. It is a signpost along the journey.