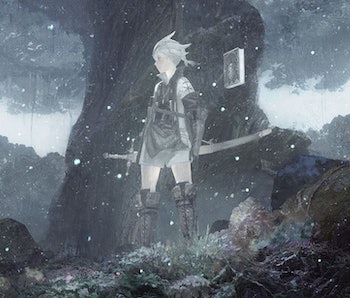 Nier: Automata garnered critical acclaim and a massive fanbase upon its release in 2017 thanks to exciting gameplay from PlatinumGames and a philosophical story that rewards multiple playthroughs. Some fans of Nier: Automata may not even know it's a sequel to a cult classic PS3 and Xbox 360 game from 2010 called Nier.

For those that missed out on the original, Square Enix is celebrated the series' 10th anniversary with an oddly titled remake: Nier Replicant ver.1.22474487139....

Then, at Tokyo Game Show 2020, the developers revealed a tons of new information about the game, including a deep dive into its mechanics.

The announcement and TGS showing of Nier Replicant confirm that the game has been recreated from the ground up for modern platforms, and some of its developers went on to detail exactly what that means in an interview with Famitsu and at TGS. If nothing else, know that Nier Replicant will be much more than a simple port.

Here's everything we know about it.

When is the Nier Replicant release date?

During TGS 2020, the release date for the Nier Replicant remake was finally confirmed. In North America, the game will be released on April 23, 2021. It will be released a day earlier in Japan on April 22, which falls on the 11th anniversary of the original game's Japanese release.

When Nier Replicant was announced earlier in 2020, it did not have a release date. Some wondered if it would make the exact 20th anniversary of April 22, 2020. While this wasn't the case, we've now learned that the game will come out on the original game's 11th anniversary, at least in Japan. The western release date lines up with Nier's European anniversary, but it's four days ahead of its 11th anniversary in the US.

Is there a trailer for the Nier Replicant remake?

While a teaser trailer was released earlier in 2020, a new trailer for the Nier Replicant remake was shown off at TGS 2020. That trailer (included below) highlights the redone environments, new music from composer Keiichi Okabe, and some new artwork of Nier's characters from Akihiko Yoshida.

What platforms is the Nier Replicant remake on?

Nier Replicant will be released by Square Enix for PC, PS4, and Xbox One. (Sorry, Nintendo Switch and Stadia players.) These are the same exact platforms that Nier: Automata is available on, so it makes sense that Square Enix would stick to the same release scope.

Like Ubisoft's Prince of Persia: The Sands of Time remake, this Nier remake is opting out of a next-generation release for PS5 and Xbox Series X. The game will be backward compatible with both systems though, so you don't have to worry if you are upgrading your console this fall.

Who is developing the Nier Replicant remake?

While Square Enix is publishing Nier Replicant, it isn't developing the remake internally. In fact, it's being handed to a brand new development team. Nier's original developer Cavia shut down and PlatinumGames is busy with other titles like Project G.G. and The Wonderful 101 Remastered.

Instead, Nier Replicant is being developed by Toylogic, a studio is best known for its work on Happy Wars and the critically panned Contra: Rogue Corps. If the developer's track record has you a bit worried, try to take solace in the fact that what we've seen of the game so far looks good and some of the franchise's creators are involved in the development of this remake. Director Yoko Taro, Producer Yosuke Saito, and Composer Keiichi Okabe are all attached to Nier Replicant.

What will Nier Replicant change?

As with any remaster or remake, Nier Replicant is making some notable changes, many of which were highlighted during an interview with Famitsu. As reported by DualShockers, changes to visuals, combat, and more were all discussed and make it clear that this is a thorough remaster.

According to that interview, the gameplay is taking notes from Nier: Automata. As it becomes more fluid, the game will become less clunky and appeal more to fans of Automata. There is still a bit of division on how much to change it though, as Yoko Taro and co. all want to tweak it a lot while gameplay supervisor Takahisa Taura is a bit hesitant to change too much.

The visuals will be upgraded, though they will retain the screenplay and camerawork of the original. The team is also putting a lot of effort into new, "additional parts" of the game that they hope will entice fans both new and old to try it out. Finally, all of the music and a lot of the voice lines are being rerecorded so they will be of higher quality.

What is Nier Replicant about?

Because Nier Replicant is a remake, we already know the story that the game will cover. While we won't spoil anything major here, you should know that Replicant is a must-play for fans of Automata.

"Set in a post-apocalyptic world, NieR Replicant ver.1.22474487139… puts you in the role of the titular Nier, a young man on a quest to cure his sister Yonah of a deadly disease," Square Enix's official description for Nier Replicant reads.

"What they discover will make them question everything they thought they knew… as they join a brother’s captivating quest to cure his sister of a deadly disease — a quest which will, in turn, make them question everything." To be more specific, Nier Replicant follows a kid named Nier who is seeking to cure the Black Scrawl, a disease that has taken over the body of his sister Yonah.

The game takes place over 1,000 years after an apocalyptic event. These days, humanity is trying to rebuild in a world dominated by the remains of buildings and technology. Over the course of the adventure, players will start traveling with the Grimoire Weiss, a talking, magical book; a swordsman named Kain; and a boy named Emil that can blind people by looking at them.

Though it has a simple premise, Nier Replicant has some surprising twists that will have you thinking about the events of this game just as hard as you did about Nier: Automata.

The reveal trailer for Nier Replicant is purely story-focused, so we haven't gotten a look at the redone gameplay yet but Square Enix has revealed it will be a "third-person action RPG" like the original. The overall experience should be reminiscent of 3D The Legend of Zelda titles. The game still manages to take some risks with gameplay, incorporating fishing and farming sections.

The gameplay of Nier Replicant feels slower than what's present in Nier: Automata, though the developer interview makes it clear that its speed will be raised a bit. While Square Enix hasn't officially posted gameplay, YouTube channel GamersPrey rounded up the gameplay footage shown during the TGS live stream.

Which version of Nier is being remade?

One of the most confusing aspects of the original Nier is that multiple versions of the game with different protagonists and some different story elements exist. The Replicant version of Nier that is being remade has never even been released in the West. The version of Nier released in North America in 2010 has been deemed Nier Gestalt and has some clear differences from Replicant.

The biggest change is with the protagonist. In Nier Gestalt, the protagonist was a grisly old man that was Yonah's father. In Replicant, you control Yonah's brother which ends up changing how most of the game's relationships feel. Each version of Nier also has some unique music tracks. Overall, Nier Replicant is generally seen as the best and "truer" version of Nier, so it makes sense that Square Enix would remake that version.

What are the pre-order bonuses and Collector's Edition for the Nier Replicant remake?

At TGS, the pre-order bonuses and a collector's edition for this remake were also revealed. On PS4, pre-orders will net players a dynamic theme, avatar set, and a digital soundtrack. The Xbox One version of Nier Replicant ver.1.22474487139... just includes the soundtrack as a pre-order bonus. Finally, the PC port of the game will feature a wallpaper set in addition to soundtrack. The remake will cost you $59.99.

If you are a die-hard Nier fan and want to spend more money on the remake, Square Enix is also releasing the Nier Replicant ver.1.22474487139... White Snow Edition. It costs $159.99, but comes with a Collector's Box, steelbook case, pin set, a hardcover book with the game's script, and a physical two-disc soundtrack.