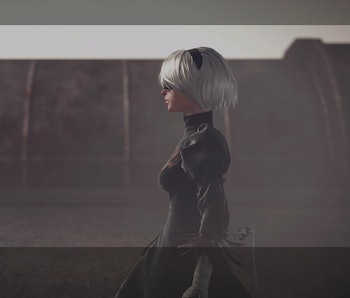 Officially announced back in 2015 during Paris Games Week, Nier: Automata is the long-awaited sequel to 2010’s cult hit Nier. We finally got the chance to experience the PlatinumGames demo as an early present for the holidays last month. The excellent combat PlatinumGames is known for is certainly present, combined with a wonderful soundtrack and promising narrative, but more importantly: We got a good look at the mixed level design that really makes Nier: Automata stick out.

While largely disconnected from Nier’s immediate plot, Automata takes place in the same universe some 10,000 years in the future where an army of machines have taken Earth from humanity, forcing them to flee to the Moon. Looking to fight back against the invaders, the humans created combat androids called the YoRHa, who you’ll be playing as. Each of these androids is prohibited from emotions and lack true names, but appear to be programmed with specific personalities that distinguish them from their compatriots.

They’re each equipped with a unique arsenal too — an assortment of blades, guns, pods, and suits that allow them to fulfill their dedicated combat role. Throughout the demo, you use 2B’s light and heavy katanas as well as a small robotic companion to slash and shoot your way through waves of enemies. When the demo starts, you’re fighting in a 3D arena with the tried-and-true PlatinumGames combat formula from titles like Bayonetta. But, as you get further in, Nier: Automata starts to shake things up with 2D and top-down sequences.

Take the middle of the demo for example, where 2B makes her way through an old machine factory filled with enemies. You walk up and down gigantic, tightly packed stairwells and platforms where there’s usually little room to move the camera in a 3D environment. Instead of awkwardly positioning the camera, Nier: Automata simply backs the camera up to line it up with the platforms — turning the entire gameplay experience to top-down 2D like you’d find in Helldivers or Hotline Miami. The result is a surprisingly excellent, five-minute section that feels organic given the gameplay mechanics and the combat situation.

I was continually impressed by the way Nier: Automata handled these sequences instead of simply sticking with the usual action-oriented formula. PlatinumGames didn’t simply separate these sequences with dynamic fades that would make them feel out of place, they built them into the game with seamless transitions that actually make sense given the context of the battlefield.

There’s only a few of these sections like this, but each sequence is designed extremely well with a seamless transition and meaningful placement in the demo. At this point, we don’t know how much of the final release is going to be built around these sort of sections, but provided they are all just as elegantly placed throughout the full version of the game, it’s an approach to level design we can certainly get behind in the future.

More like this
Gaming
Sep. 21, 2022
15 years ago, one sci-fi game changed everything — now, it's getting an upgrade
By Robin Bea
Gaming
Sep. 21, 2022
25 years ago, the most ambitious puzzle platformer changed video games forever
By Robin Bea
Gaming
13 hours ago
Last of Us HBO trailer hints the show won't ignore a key romance
By Jen Glennon
Related Tags
Share: