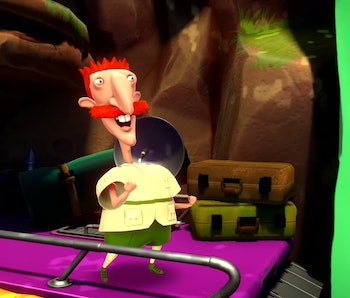 Nickelodeon All-Star Brawl has finally been released, but there's still a lot more to come for the Super Smash Bros. clone if DLC leaks are any indication. It launched on the same day as Nintendo’s announcement that Sora from Kingdom Hearts would be the final Super Smash Bros. Ultimate fighter, and while it’s a middling fighting game, the novelty of playing as 20 Nickelodeon characters is fun — especially when you consider what the leaks indicate for the game’s future.

Nickelodeon All-Star Brawl currently has a roster of 20 characters that range from super popular ones like Spongebob to somewhat obscure pulls like Obilina from Aaahh!! Real Monsters. Rumored DLC characters may just be even more exciting than the base roster.

Is there Nickelodeon All-Star Brawl DLC?

Currently, no season pass or DLC is available to purchase. That said, the developers have teased that there's more in store. Speaking to Game Informer, Ludosity CEO Joel Nyström confirmed post-launch plans: "At launch, there will be 20 characters, with 2 more following soon after," he said. "Additional DLC characters will be revealed after that."

While these characters aren't available just yet, we can expect them in the future. While GameMill and Ludosity haven't officially teased any new characters yet, some major leaks have clued us in on who could join the fray.

Who are the Nickelodeon All-Star Brawl leaked DLC characters?

As soon as Nickelodeon All-Star Brawl was available, some avid and technically savvy fans data-mined it to see what was hidden within the code. This proved to be very lucrative as they discovered stages and announcer lines for future characters. Stage assets and art discovered makes the identity of two post-launch characters pretty clear.

The Teenage Mutant Ninja Turtles villain Shredder and the lasagna-loving cat Garfield are supposedly in the pipeline for release as upcoming fighters. Yes, you read that right. Garfield will be playable in a fighting game soon. Community manager Thaddeus Crews appeared to confirm the validity of these leaks in the game's official Discord.

"Brought up concerns of data-mining & was told content would be removed,” he explained. "It wasn't removed."

Crews also hinted that those two characters were intended for the base game release but weren't ready by the release date. He also said on October 5 that "no DLC content has been worked on at the time of writing" but teased that "this game's post-launch plans are sick and I'm gonna give it 110 percent all the way."

While Shredder and Garfield seem like guaranteed additions, the code also contains announcer voice lines for several potential characters. The following characters were all referenced by the announcer in the data-mine:

Crews hinted that these voice lines don't guarantee a character's inclusion. "Voice lines in the project cover bases and are not be-all-end-all confirmations of what can and cannot happen," he said.

At the very least, Inverse hopes that some fighters from Jimmy Neutron: Boy Genius or Rocko's Modern Life are eventually added. Regardless, there are dozens of beloved characters that the developers could potentially pull from. While no reveal will match the same hype levels as Banjo & Kazooie or Sora's announcements, expect some fun DLC to come to Nickelodeon All-Star Brawl.