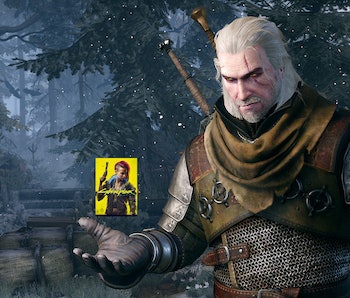 CD Projekt Red is a game studio that was once universally beloved, but following the terrible reception to 2020’s Cyberpunk 2077, the company can’t seem to make the right moves. Then, on March 21, the studio announced the next game in The Witcher series. While a follow-up to The Witcher 3 was inevitable, its announcement proves CDPR hasn’t learned much from the rocky development and launch of Cyberpunk 2077, a game that crumbled under the weight of its own hype.

Cyberpunk 2077 was announced in 2012, and after an impressive showing, it was all anyone could talk about. After the stellar reception to The Witcher 3: Wild Hunt in 2015, expectations for the company’s next game were through the roof. And understandably so — as CDPR had a positive track record up to that point.

Fast forward to 2020 following the launch of Cyberpunk 2077, and things weren’t looking so hot for the Polish studio. The game was buggy, broken, and flat-out incomplete, despite being in the works for nearly a decade. Had the company announced the game much later, CDPR might not have felt the need to rush its release prematurely.

With that in mind, the same can be said about the reveal of the new Witcher game — which CDPR clarified is not an announcement for The Witcher 4. This game won’t be out for a long time, possibly launching in 2025 or even later. The team is still working on polishing Cyberpunk 2077 and will likely support that game for the foreseeable future, meaning it can’t have all hands on deck on the new Witcher project.

Now that we know the next Witcher game is in the works, CDPR has unnecessarily drummed up excitement, leading to expectations from the community. Each time a digital event or trade show is hosted, people will wonder if the new Witcher game will be shown. This could very well influence the game’s production, just as it did with Cyberpunk 2077. Creating vertical slices of gameplay for an event like E3 takes away time and resources from a project’s development, which can have negative repercussions in the long run, especially during the early stages.

Announcing a game too early can put pressure on a developer, leading to a rushed product, just like Cyberpunk 2077, or countless others before it. You’d think after Cyberpunk, CDPR would have learned a lesson to not announce games too early, but evidently, that isn’t the case.

Barely a crumb of information

On top of jumping the gun on the announcement, it doesn’t help that hardly anything else was said about the upcoming RPG. CDPR did say it would be transitioning from the REDengine to Unreal Engine 5 with the next title in the series, which will hopefully make development go more smoothly. The company also announced a partnership with Epic Games but assured players that the next Witcher game will not be exclusive to any storefront. Aside from that, nothing else about the project was said.

Naturally, the announcement stirred up some questions: Will this be The Witcher 4? Will it still feature Geralt and will it continue the story from The Witcher 3? In response to these questions and others, CDPR’s Global PR Director Radek Grabowski issued a somewhat snarky comment on Twitter:

Grabowksi clarified that the new game is not a direct sequel and that it will not be exclusive to any storefront. That’s it.

To announce a game so early in development is odd, and even more puzzling because its developer — a company who can’t afford any more PR issues — is so reluctant to answer questions about the upcoming game.

CDPR likely doesn’t have an answer to many of these questions because of how early the game’s development cycle is. But again, why announce a game this early if the team isn’t willing to talk about it?

This marketing practice isn’t exclusive to CDPR, but rather, the games industry as a whole. But given the studio’s negative buzz over the past year and a half, it doesn’t make sense to continue making the same mistakes over and over again.

More like this
Gaming
13 hours ago
Fire Emblem Awakening Is the Most Important 3DS Game Ever
By Hayes Madsen
Gaming
12 hours ago
MLB The Show 23 Release Date, Cover Athletes, Platforms, and Pre-Orders Explained
By Joseph Yaden
Gaming
17 hours ago
Hi-Fi Rush Is an Instant Classic
By Hayes Madsen
LEARN SOMETHING NEW EVERY DAY.
Related Tags
Share: