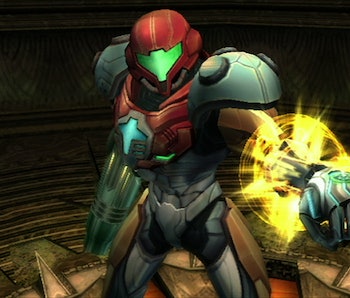 Waiting for details on Metroid Prime 4 is torture. First announced during Nintendo’s E3 2017 showcase, the game has been totally MIA since with the exception of a vague logo. The last time we heard from it was almost exactly two years ago when Nintendo restarted production on the game and handed the reigns to developer Retro Studios.

When are we going to see it again? Realistically, not until the end of 2021 at the earliest. Considering that production was fully restarted in January 2019, it’s hard to imagine two years is enough time to bring the rebooted project to life. For comparison, Super Mario Odyssey took around four years to make. The most realistic hope is for an E3 2022 Nintendo Direct grand unveiling.

That means anyone who's hungry for details won't find much for the highly anticipated sequel. Luckily, details about its potential story are hiding in plain sight ... so long as you know where to find them.

The most dedicated Metroid fans will recognize that name from a handful of games. The character has popped up three times in the series, though in unexpected places. Sylux first appeared in Metroid Prime: Hunters, a multiplayer first-person shooter on the Nintendo DS. Sylux is one of six bounty hunters who Samus must fight throughout the game.

There’s only one key detail known about him: Sylux absolutely despises the Galactic Federation and anyone that works with it. That includes Metroid’s heroine, Samus Aran. Why he hates the Federation so much is a mystery, but he does wear a stolen set of Federation armor.

Sylux was little more than a side-character in a game that demanded more bounty hunters, but that wasn’t the last we saw of him. The most convincing evidence of his involvement in the upcoming sequel comes during the secret ending of Metroid Prime 3: Corruption. Players who beat the game at 100 percent are treated to a scene that ends with a mysterious spaceship stalking Samus. As it turns out, that ship belongs to Sylux.

When the Prime trilogy wrapped up in 2007, it seemed at the time like that tease wouldn’t amount to anything. Surprisingly, the character showed up not too long ago in 2016’s much-maligned Metroid Prime: Federation Force. The multiplayer game ends with the Federation securing a Metroid egg. All seems well until Sylux makes a shocking return at the tail end, breaking into the base and hatching the egg with a laser.

Considering that the title came out in 2016 and Metroid Prime 4 was announced one year later, it seems to be a direct setup for Nintendo’s sequel hidden in a Nintendo 3DS game that few played. The decade’s worth of clues points to Sylux kidnapping a Metroid as part of a mission to get revenge on the Galactic Federation and Samus by proxy.

If that sounds far-fetched, Nintendo itself has been vocal about wanting to tell Sylux’s story. In an interview with Eurogamer in 2015, Metroid Prime producer Kensuke Tanabe confirmed the ship in Metroid Prime 3 belonged to Sylux and said, “Personally I'd like to create a story centering around Sylux and Samus. We've done a story based on the Hunters, and this time around we're doing a story on the Galactic Federation. I would like to cross the two over in the future.”

Naturally, it’s always possible that plans have shifted significantly here. Metroid Prime 4’s development was restarted from scratch, and it’s unclear if that means its original story has gone out the window as well. But with how much Nintendo has laid the groundwork for a narrative slow burn, it’d be surprising for over a decade’s worth of teasers to get thrown out the window entirely.

So for fans who are waiting patiently for the next bit of information on the game, consider revisiting a few oldies to start piecing your own Sylux fan theories together.

Metroid Prime 4 is currently in development.