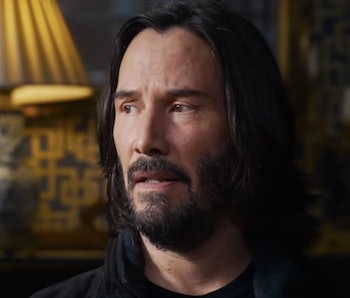 Just how deep does the rabbit hole go? The reveal of the first trailer for The Matrix Resurrections sent fans trawling through past Matrix media on the hunt for potential clues. One of the best places to look is 2003’s Enter the Matrix video game, which holds vital keys to understanding the franchise and may even explain a central theme of the upcoming movie.

Directed by the Wachowskis and released on PS2, Xbox, and GameCube, Enter the Matrix was part of an ambitious cross-media blitz to mark the back-to-back theatrical releases of The Matrix Reloaded and The Matrix Revolutions. The game stars Niobe (Jada Pinkett Smith) as Captain of the Logos, the fastest ship in the Zion fleet, and her enlightened right-hand man Ghost (Anthony Wong), a sage-like student of philosophy described by the Wachowskis themselves as an "ascetic Buddhist killer."

Both Enter the Matrix and Ghost occupy an unusual — and critically overlooked — place in the series canon, entrusted to articulate one of the series’ core philosophical themes about the nature of reality. For that reason, looking back at Enter the Matrix could give us some meaty clues about what to expect from Neo’s storyline in The Matrix Resurrections. Let’s dive in.

The first level opens on Ghost checking his guns in the construct, which Niobe despairs of, reminding him there’s no chance the firearms could’ve been loaded without ammunition.

Ghost responds, “Hume teaches us no matter how many times you drop a stone and it falls to the floor, you never know what'll happen the next time you drop it. It might float to the ceiling. Past experience can never prove the future.”

With this bizarre response, Ghost reiterates a principle of classical philosophy at the heart of the franchise’s simulation theory concept. If the intellectual mind is prepared to believe that the opposite of a rational, causal outcome could occur, they will be able to accept the existence of the Matrix. Perhaps more importantly, one will understand that experience and sensory information are not infallible methods of proving what is true. Nothing is.

This grounding in classical philosophy is crucial to the films, though little of it made it to the final scripts. The Wachowskis famously insisted Keanu Reeves read multiple books on contemporary philosophy and evolutionary psychology before coming on set, to ensure he had a frame of reference for the foundational thinking and subtext behind the films. Most of this background context never made it into Neo’s dialogue, but Ghost’s direct citation of philosophical references allows him to function as a kind of appendix for the series’ lore.

Ghost further elaborates on this train of thought later in the game with Trinity, as the pair discuss their illogical faith in Neo.

“Kierkegaard reminds us that belief has nothing to do with how or why,” Ghost says. “Belief is beyond reason. I believe because it is absurd. Faith, by its very nature, must transcend logic.”

Here, Ghost follows up on his denunciation of logic and sensory experience as methods of defining truth by instead identifying an underlying human reliance on faith in the absurd. He values faith over reason for the purpose of defining truth in an illogical world, suggesting he believes truth is a highly fragile, subjective thing.

This is all peak Matrix banter, but Ghost’s best line is delivered when he visits the Oracle near the end of the game.

After the Oracle reminds him that Trinity, the love of his life, will only ever love him platonically, Ghost says the knowledge frees him from expectation, replacing the hope for a dream with an unhappy truth, which he appears to truly prefer.

"Nietzsche said it best,” he explains. “One must want nothing to be different — not forward, not backward, not in all eternity. To not only bear what is necessary, but to love it."

With this, Ghost embraces one of the most challenging of philosophical principles: to make peace with tragedy and enjoy sadness and loss as equally valuable aspects of existence. Amor Fati means finding purpose and fulfillment in hideous struggle, like a speedrunner playing Enter the Matrix on hard difficulty.

The Oracle clearly approves of Ghost’s response, and mentions that she dearly hopes people like him will survive the war to rebuild the world after the path of the One ends.

Thanks to the lore of the 2005 online role-playing game The Matrix Online, we know this is what has happened in the lead-up to the newest film in the series, The Matrix Resurrections. Ghost is very much alive at the time, and Jada Pinkett Smith will reprise her role as Niobe for the fourth film.

What it means for Resurrections

As we’re all aware by now, The Matrix Resurrections follows the sixth incarnation of The One, Neo/Thomas Anderson, as we can see him re-plugged in the machine city in a frame of the trailer with the burned-out eyes he got in Revolutions. By the end of the trilogy, Neo was a man who had zero working eyes, lost the love of his life, and saw Zion devastated by the conclusion of the Machine War.

While we can’t say yet, it may be the case that Neo requested to be re-plugged and memory wiped, as Cypher famously wanted in the first movie. This position is what we might call ‘“amor fictus,” a love of what isn’t real; the choice of the blue pill.

This would explain Neo’s pleasant, luxurious life in California we see in the trailer. Comfortably rotting in dreamland, he’s free from the pain of truth, and the pain of truly living.

It’s here that he meets Trinity. Given the level of influence the film affords to The Matrix Online, we can assume this is a Trinity quite unlike the one the fans remember. The online game reveals Trinity has become a Biological Interface Program. Yes, she’s still physically dead in the real world, yet she’s capable of entering the Matrix beyond death due to her DNA being synchronous with machine code, as Neo’s was, by the design of the Oracle.

Since Trinity remains dead outside the Matrix, Resurrections may touch upon Neo’s struggle to accept the real world without her, as Ghost did. Assuming Anthony Wong reprises his role, he may be the one to articulate that sentiment for Neo and help him move forward.

Regardless of whether Neo is alive and consensually blue-pilled in Resurrections, Amor Fati remains a key concept to the Matrix franchise. It represents the ultimate, near-impossible goal of choosing the red pill: to embrace the ugly truth. Not out of mere curiosity or disinterest in the status quo, but because you have learned to love the grotesqueries of existing.

The Matrix Resurrections comes to theaters and HBO Max on December 22, 2021.