“I could’ve been great, but you never loved me.” 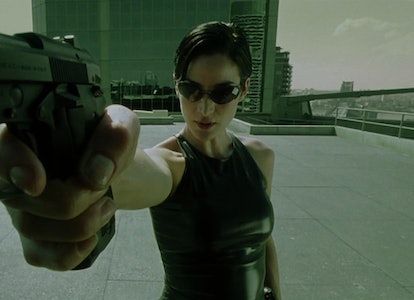 The Matrix Resurrections is bringing back several dead characters, but one, in particular, could confirm a mind-blowing Matrix 4 theory. Why is Trinity alive? The answer could reveal her mind-blowing true role in the sci-fi franchise.

The theory — Over on Reddit, u/missanthropocenex recently put forward an idea about the original Matrix trilogy that could have big implications for The Matrix Resurrections. The theory revolves around a simple idea: what if Cypher was almost The One?

The argument hinges on a few key moments in The Matrix:

What does all this mean? According to u/missanthropocenex, it’s possible that Trinity’s connection to the One isn’t exactly what we thought. She’s not destined to fall in love with Neo. Rather, whoever she does fall in love with will become the One.

This matters because Cypher seems to think that he was also in the running to be the One and the only thing holding him back was Trinity’s love. Admittedly, it’s a bit of a weird theory that reduces Trinity to a femme-fatale plot device, but in the world of the Matrix where people and computer programs are interchangeable, it actually makes pretty good sense.

Trinity and The Matrix Resurrections

If we assume that this theory is correct, it also opens up some interesting new possibilities for The Matrix 4. Why is Trinity in Resurrections even though she perished in Revolutions? The answer may simply be because she needs to be there. Because without her, Neo can’t become the One.

Again, this is a weird theory if you think too much about it, but if we just accept it as fact, it suddenly makes Trinity the most important character in Matrix 4.

Of course, this doesn’t explain how Trinity is alive — or how Neo is alive for that matter. Maybe she’s a simulation, or maybe she was a computer program all along. Hopefully, The Matrix 4 will answer this question, but in the process, it could also reveal that Trinity’s true purpose all along has been even more important than we thought.

The Matrix Resurrections hits theaters and HBO Max on December 22.

More like this
Entertainment
Jan. 31, 2023
Dune 2 Will Be Hilarious, Says Actor Whose Character Killed His Own Dad
By Ryan Britt
Entertainment
Feb. 1, 2023
In Knock at the Cabin, a Terrific Dave Bautista Saves M. Night Shyamalan From Himself
By Hoai-Tran Bui
Entertainment
Jan. 26, 2023
Attack the Block sequel will take a page from the two greatest sci-fi sequels, director says
By Eric Francisco
LEARN SOMETHING NEW EVERY DAY.
Related Tags
Share: