“Never send a human to do a machine's job.” 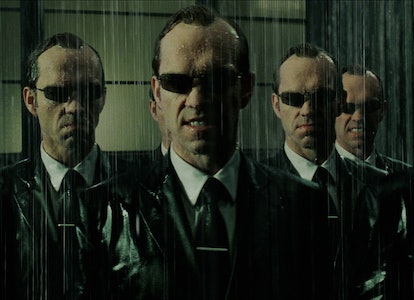 For all its loose threads, The Matrix Revolutions definitely made one thing clear: Agent Smith is dead. Or is he? While the trailer for The Matrix Resurrections doesn’t feature the character in any obvious way — and Hugo Weaving has publicly said he’s not in the long-awaited sequel — there’s still reason to believe that the best villain from the original trilogy could return in Matrix 4.

So where is Agent Smith in The Matrix Resurrections? The answer may come from the same source as some of the new movie’s other biggest mysteries: the online roleplaying game, The Matrix Online. (Warning: Speculative spoilers for The Matrix 4 ahead.)

The Matrix Online offered players a unique chance to find new colorful, rich contexts to existing and consistently introduced pieces of lore. It was inevitable that Smith would rise again. Scattered into remnants of programming, Smith began infecting the simulation. Agent Gray was the first to be infused with Smith’s remaining code. As a result, Gray gradually left behind his ideals of Machinist control for those of Smith’s extremist take on humanity.

Like malware itself, Smith figured out how to shelter himself within the system. Either hiding within overlooked facets of the Matrix or using another program’s Residual Self Image to disguise his own code, Agent Smith was still unplugged and able to temporarily escape full-deletion.

As Smith systematically broke Gray down, his superiors began to notice emotive patterns and humanity-based jabs — “Their stench unbearable any longer.” The virus spread until a player-led event managed to extinguish Smith once and for all. Yet, it seems like Smith could be returning for revenge in The Matrix Resurrections.

At this point, it is unclear what Resurrections’ tranquil, sedated version of the Matrix is specifically. Surely this isn’t the same paradise created in Revolutions closing moments? Here we are once again, “Going back to The Matrix” as Jonathan Groff posits in the trailer. It is Groff himself, however, who might just be a key figure in the return of Smith’s coding.

As chaos escalates throughout the trailer, we see the return of the classic Agent. Bearing a resemblance closer to that of the “upgrades” in Reloaded, their muted green suits are out to police the simulation. That is a primitive, Machine-led goal. As Neo begins to unravel the mystery of his purpose, just like he did in 1999, it would only be fitting that Smith would return to thwart another uprising.

Groff isn’t featured too heavily in the trailer, but his limited appearance formulated enough reason to believe appearances can be deceiving. Neo finds himself at gunpoint, with the signature Desert Eagle handgun, wielded by Smith and his clones before him. Water is flooding the high-rise setting, much like it did in Morpheus’s escape in the first film. The cinematographer’s deep focus may be obscuring the gunman, but Groff’s heavily dyed hair and tailored suit aesthetic are easy to make note of.

Opening the trailer with a familiar black cat, to signal instability, it is clear that this simulation could crumble. Or be susceptible to the spread of a virus. It seems even Neo’s image of himself isn’t quite as cut and dry. Despite players defeating the Smith code in The Matrix Online, no further elaboration on his fate has been offered.

Hugo Weaving’s appearance may be quarantined from the Matrix’s system, but if the simulation is as weak as it could be believed to be, then Groff might just be the ideal Residual Self Image to manifest within. The fact that Neo is so heavily sedated with blue pills to smother his abilities further supports the idea this version of the Matrix couldn’t deal with such immense power. And if Smith truly has returned in a suitable vessel, it will be interesting to see just how meta The Matrix Resurrections will get if the trilogy events are referred to as in-simulation fiction.

The set dressing in Groff’s office lends itself to this theory too. Positioned again out of focus, a bronze bust bears a striking resemblance to a Revolutions era piece of merchandise, displaying Neo’s iconic CGI punch across Smith’s face. The visual makeup of The Matrix Resurrections is ushering a different chapter for the franchise and quite possibly... a new era for Agent Smith.

The Matrix Resurrections premieres December 22 in theaters and on HBO Max.