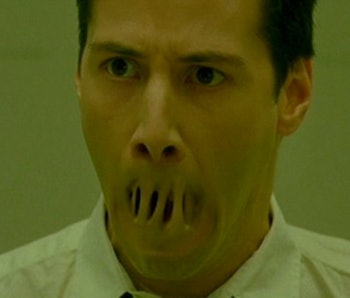 It’s been two weeks since our minds were collectively blown by the trailer for The Matrix Resurrections, but will still have no idea what this movie is actually about. What’s the plot of Matrix 4? How are Neo and Trinity still alive? Why is Morpheus not alive? the answer to all those questions and more may be contained in one of the oldest — and weirdest — fan theories about the original Matrix trilogy.

On September 17, Reddit user u/BasketOfPizzas posed a simple question to the Fan Theories subreddit: what if the Matrix is the real world, and the real world is actually the Matrix. In other words, all the terrifying robots and future dystopias we saw in the original movies were drug-induced hallucinations. In The Matrix 4, Neo’s therapist (played by Neil Patrick Harris) is keeping him sane with benevolent blue pills.

It’s a fun idea to discuss, but that’s not why we’re here. Because, as is often the case, the best ideas often come from the r/FanTheories comments section, and this time was no exception.

Running counter to u/BasketOfPizzas’ suggestion, another Matrix fan offered a theory of their own: “There is a Matrix within the Matrix.”

In essence, this means that when the machines notice one of the humans in the Matrix is starting to “wake up” from their false reality, the system automatically sends them into a second simulation where they can play out a scenario of being the chosen one, escaping the Matrix, and joining the human revolution.

Not only is this is a fun theory, but it also answers a major question from the previous movies: how was Neo able to control the machines outside of the Matrix? The films gesture at an answer using a loose metaphor for wifi, but that was never totally satisfying. A much better solution is that the reason Neo still has powers in the real world is because he’s not in the real world at all. He’s still in the Matrix.

If that’s the case, then Matrix 4 can essentially retcon the entire trilogy to be meaningless and start from scratch. Nothing that happened in the first three movies actually happened, and only in Resurrections will the true battle against the machines actually begin.

This might infuriate some fans, but it will also make for one hell of a twist. And in the process, it could confirm one of the weirdest fan theories around.

The Matrix Resurrections premieres December 22 on HBO Max and in theaters.

More like this
Entertainment
20 hours ago
Attack the Block sequel will take a page from the two greatest sci-fi sequels, director says
By Eric Francisco
Entertainment
Jan. 25, 2023
Infinity Pool is a hedonistic head-trip
By Isaac Feldberg
Entertainment
Jan. 23, 2023
Animalia is an alien invasion movie with metaphysical dreams
By Andy Crump
LEARN SOMETHING NEW EVERY DAY.
Related Tags
Share: