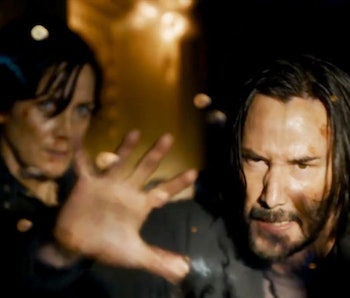 Something is wrong in the trailer for The Matrix Resurrections, and it has everything to do with a new character played by Neil Patrick Harris. The highly-anticipated teaser opens with Keanu Reeves sitting in a therapist office across from Harris, who seems to be prescribing Neo a heavy dosage of Blue Pills to keep him from (re)discovering the Matrix.

But who is this mysterious therapist? The answer may come from an unlikely source that’s become increasingly important to fans ahead of The Matrix Resurrections release date: the short-lived video game, The Matrix Online.

Cryptos and The Matrix Online

Set in the immediate aftermath of The Matrix Revolutions, the online role-playing game had the opportunity to fully explore the fragile peace Neo brokers between man and machine at the end of the trilogy. The robots have agreed to let the people of Zion live in peace and even allow red-pilled humans to freely leave the Matrix, but not everyone is comfortable with this arrangement.

In The Matrix Online, we meet an extremist group of pro-blue pill humans who refer to themselves as Cypherites (named after Cypher, the traitor played by Joe Pantoliano in the original Matrix) and carry out attacks both in the Matrix and in Zion and to prevent the humans from awakening to the truth. (The Cypherites also discovered a secret city called New Zion where humans were sourcing weapons, which kickstarted a new major conflict, but that’s a story for another time.)

The leader of the Cypherites was Cryptos, a former captain of Zion’s army who once argued in favor of using virtual nuclear bombs to wipe out the Matrix and wipe out every human still jacked-in in the process. It’s unclear why Cryptos switched sides, though his extremist personality didn’t change when his allegiances did.

When we last saw Cryptos (before Warner Media pulled the plug on The Matrix Online it was discovered that he and the Cypherites were under the control of the machines all along. He was also attacked by Seraph, the protector of the Oracle in the original trilogy, leaving him blinded.

We haven’t heard from Cryptos since then, but is it possible he’s hiding in plain sight in The Matrix Resurrections?

Cryptos in The Matrix 4

In the trailer for The Matrix Resurrections, Neil Patrick Harris wears blue glasses. Could this be a subtle reference to Cryptos’ own ocular trauma? Harris is also prescribing blue pills to Neo by the truckload, which seems like the kind of thing Cryptos would do — assuming he’s still around. It might be a stretch, but clearly, Neo’s therapist is up to no good.

Then again, recasting a Black character with a white actor wouldn’t exactly be a good look for The Matrix 4. Of course, the fact that the Matrix is a simulation and literally anything is possible, but turning Cryptos into Neil Patrick Harris would still be an unforced error. (There’s a reason Warner didn’t cast Nicolas Cage as the new Morpheus.)

But even if he’s not technically “Cryptos,” we wouldn’t be surprised if The Matrix 4 borrowed heavily from the story of the Cypherites and their complex leader. After all, it’s about time that some of the nuanced storytelling from The Matrix Online made the leap from a maligned video game plot to the mainline Matrix movies.

The Matrix Resurrections premieres in theaters and HBO Max on December 22.

More like this
Culture
5.14.2022 11:30 AM
You need to watch the most subversive sci-fi sequel on HBO Max ASAP
By Alex Welch
Entertainment
5.4.2022 10:00 AM
George Lucas almost cut Star Wars’ most important character from A New Hope
By Ryan Britt
Entertainment
5.9.2022 12:00 PM
25 years ago, Bruce Willis made the most divisive sci-fi movie ever
By Jon O'Brien
Related Tags
Share: