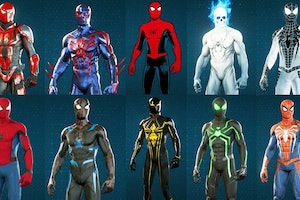 Marvel’s Spider-Man for the PlayStation 4 — also playable as part of an upgraded PlayStation 5 version — is one of the greatest superhero video games of all time.

There are a plenty of powers, skills, and abilities to choose from as you control Peter Parker, the lovable friendly neighborhood web-crawler. As Spider-Man, you’re able to discover a total of 28 suits. Most of these suits come with a unique power that can help emphasize some of Peter’s skills. In some cases, we’re talking game-changing power-ups. In others, it’s more of a fun factor type of thing.

Here’s a look at six of the best suit powers worth investing time into unlocking ASAP in Marvel’s Spider-Man.

Each suit can be unlocked using a combination of Tokens earned by accomplishing various tasks, with the recipes listed right in the menu. Backpack, Base, Landmark, Research, and Challenge Tokens are all marked on the in-game map — if you don’t see them, then you’ll need to play more of the story to reach a point where these side quests are unlocked. Crime Tokens are earned by stopping randomly occurring crimes, so when you see the red exclamation mark pop up nearby, it’s always worth dropping your current task to attend to it.

Once a suit is unlocked, its power can be attached to any suit, so you can mix and match your favorite looks and abilities. In other words, don’t worry about the cosmetics, because the real focus here should be on the abilities.

Here are the most important suits to get — and their their suit powers — in order of when they become available to the player.

Essentially the default suit power granted from the Advanced Suit with the white spider emblem, Battle Focus remains top-tier for the entire game.

It causes the Focus meter to recharge continuously for a brief period of time. Not only does Focus help heal Spider-Man during battle, but full Focus charges allow him to execute Finisher moves that can take enemies down with a single badass cutscene. Later in the game, a number of abilities stack very nicely to give the player more and more focus.

On the plus side, the Advanced Suit is also more or less the default suit for the story. I found myself putting it on every time I did a story mission because it felt disrespectful to the canon to do otherwise, right?

The best suit power in terms of stealth early on, Sound of Silence makes it so that enemies can no longer call for backup. So if players can quickly eliminate several enemies in quick succession, even if they detect you, it’s alright. The duration is short enough, however, that one later stealth power outclasses it by far.

Still, for anyone who favors a more aggressive playstyle that involves messing up stealth and quickly eliminating opponents in reckless fashion without alerting enemies, this is a great option.

Also on the plus side, the Noir Suit does look hella cool.

This suit made by Tony Stark featured prominently in Spider-Man: Homecoming, but it also makes an appearance in the game. The small Spider Drone appears here in the form of Spider-Bro, a floating turret that shoots at all nearby enemies.

In a pinch, Spider-Bro functions like a great decoy distracting enemies, dissipating crowds, and also doing a good amount of damage. For players who want a more classic Spidey look, the aesthetics of this one might be better than the Advanced Suit. But in terms of suit powers, this one’s pretty balanced and useful.

The Electrically Insulated Suit was probably designed to combat Electro and somehow wound up being perhaps the single least attractive suit in the entire game. And yet, it’s easily the best suit power in terms of crowd control while also coming in really handy for any challenges requiring players to electrocute enemies.

Rather than one of the shockwave-based powers from the Negative Suit or Spider-Punk outfit, the Electrically Insulated Suit grants Spidey Electric Punch, electrifying his Spidey’s fist so every single punch stuns and shocks an enemy for a prolonged period of time. Always pick this over Arms Race, Negative Shockwave, or Rock Out. But please, wear something else.

Especially later in the game when boss battles become more frequent, the power granted from the Fear Itself becomes really handy. True to its name, the Quad Damage power “temporarily deals MASSIVE damage” with every hit. I would estimate that it deals about four times the normal damage — but I’m really not that good at math.

“Fear Itself” was a crossover comic book story arc from 2011 in which Earth’s heroes had to fight the villainous Serpent, an Asgardian god of fear. Tony Stark worked with the Dwarves of Nidavellir to make this suit out of Uru, the same metal that makes up Mjolnir. So yeah, it’s pretty badass.

The aptly-named Stealth “Big Time” Suit offers the single best stealth ability in the entire game and one of the coolest minimalistic costume designs around. Once acquired somewhat later in the game, the Stealth-focused power totally outclasses the Noir Suit’s Sound of Silence in every way.

It creates a distortion field that obscures you from enemies’ vision when they aren’t already alerted, which, if you’re doing your job right, should be everyone.

Watch us livestream the first 30 minutes of Spider-Man:

This article was originally published on Sep. 15, 2018