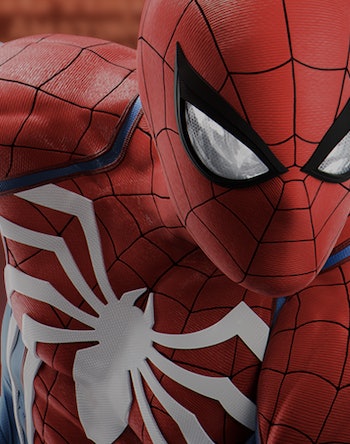 By now, gamers addicted to Marvel’s Spider-Man on the PlayStation 4 will have unlocked most, if not all of Spider-Man’s spandex duds.

But what on Earth-616 is a “Spider-Man Noir” or a “Spider-Man 2099”? For answers, you’ll have to go to where Spidey first crawled up walls and fought his famous foes: His long comic book history.

In Marvel’s Spider-Man, gamers take on the role of Peter Parker eight years into his career as the heroic crime-fighter. As gamers level up or complete specific tasks, they’ll unlock a total of 28 sweet costumes, most of them ripped straight from Spidey’s canon. Be it variations on the classic costume from specific storylines or alternate Peter Parkers from a parallel universe, Spider-Man primes gamers to hit up their local comic book stores for back issues and trade paperbacks.

For those eager to learn more about the origins of Spidey’s wild and crazy superhero wardrobe, check out Inverse’s list of every costume Insomniac Games stuffed into Spider-Man, and where to read them. And unlike having to look for webbed backpacks in New York, fret not. We’ve got links to every book on Amazon and Comixology for your convenience.

No intro necessary. This is the suit designed by Insomniac Games’ art director, Jacinda Chew, who took inspiration from athletic wear to spin a fresh take on an old favorite.

“For the advanced suit, we looked at athletic wear,” Chew told Variety. “It’s almost like a wetsuit, it’s stretchy and still has flexibility. It’s not super shiny. There is definitely a texture to it.”

And Insomniac’s Spider-Man will soon be canon. This fall, Christos Gage will pen a new crossover, Spider-Geddon, a sequel to 2014’s Spider-Verse that will once again see Spider-Heroes from the multiverse unite against a common enemy, the Inheritors.

Spider-Geddon will have Insomniac’s Spidery fighting side-by-side with the “prime” Spider-Man, Silk, Miles Morales, Superior Octopus (long story), and more. The series begins with issue #0 on September 26. You can pre-order it now on Comixology.

Thank you, Steve Ditko. The iconic, original red and blue outfit that’s become a staple for both bedtime and Halloween is available at the start of the game. It gets messed up after the bout against Kingpin, which also unlocks a “damaged” version.

Where to read: The Amazing Spider-Man Omnibus

A cel-shaded variant of the classic costume. Honestly reminds me of the 2004 Ultimate Spider-Man game.

Created by David Hine, Fabrice Sapolsky, Carmine Di Giandomenico, this dark Spider-Man of Earth-90214 inhabits a parallel universe where the Marvel Universe exists amidst the Great Depression of the 1930s. In this universe, Peter Parker is a reporter who uses his spider powers to avenge the death of his mentor, crime reporter Ben Urich, against crime lord Norman Osborn.

Where to read: Spider-Man Noir

To sum up Clone Saga in just a few paragraphs is a fool’s errand. It was a massive storyline that went maybe too long, but nevertheless remains a big part of ‘90s mainstream comics.

Here’s the skinny: Ben Reilly (named after Ben Parker and May Reilly) is Peter Parker’s clone. When Venom and Carnage go on a rampage, Ben dons a makeshift costume in order to earn Peter’s trust, and is dubbed by the media as the “Scarlet Spider.”

Where to read: Spider-Man: The Complete Clone Saga Epic

When Thanos came for the Infinity Stones, Spider-Man needed an upgrade. This stunning costume (inspired by the “Iron Spider” from Civil War) comes right from the end of Spider-Man: Homecoming and is the main suit Peter wears in Avengers: Infinity War — to the bitter end.

In Brian Michael Bendis’ 2004 mega crossover Secret War, Spider-Man joined Nick Fury along with a dozen other Marvel heroes in a secret mission to overthrow Victor Von Doom, AKA Doctor Doom from his rule over Latveria. And he was given a nifty black costume designed specifically for the mission.

Where to read: Secret War

Ten years before Martin Li surfaced as Mister Negative in the Marvel Universe, Spider-Man had his own “negative” costume. In 1998, Spidey wound up in the Negative Zone, which depleted Spidey’s costume of its color.

In a ‘90s bout against Electro (who appears in the game as a member of the Sinister Six), Peter Parker invented this electric-proof costume when he teamed up with the X-Men member X-Man.

Where to read: The Amazing Spider-Man #425

Hailing from Earth-138 is Hobie Brown (who in the main Marvel Universe is known as the Prowler), who rocks as hard as he punches as Spider-Punk. Hobie first appeared in the 2014 crossover Spider-Verse, in which all the different Spider-Heroes across the multiverse united to prevent their own annihilation.

Where to read: Spider-Verse

In Spidey’s canon, competing in pro wrestling was a big lesson in what “great responsibility” means. This particular version of the costume comes from Brian Michael Bendis’ Ultimate Spider-Man #3 when he body slams Crusher Hogan.

Where to read: Ultimate Spider-Man #3

In a crossover written by Matt Fraction and Ed Brubaker, Earth’s mightiest heroes stood together — with new gear courtesy of Tony Stark — against Serpent, an Asgardian who creates fear panic among humans as he seeks to kill Thor and claim the throne of Asgard. This costume comes from this storyline, in which Spidey came equipped with high-tech gauntlets.

Where to read: Fear Itself

In Amazing Spider-Man #656, from Dan Slott’s “Big Time” storylines, Peter Parker is robbed of his spider sense and invents a sleek black and green armored costume in order to fight Massacre.

With a new job at Horizon Lands and membership in the Avengers, Spider-Man enters a new, prosperous period in his life in “Big Time,” a series of storylines in Dan Slott’s Amazing Spider-Man just before things spiral in Superior Spider-Man. In issue #650, Spidey builds a stealth suit to combat Hobgoblin.

During his adventures with Deadpool in Spider-Man/Deadpool #8, Wade accepted a contract to kill Peter Parker, unaware of Peter’s true identity as Spider-Man. In Purgatory, Peter went face to face with Mephisto, who in the past hurt Peter in the worst way you could: Erasing his marriage to Mary Jane.

Also called “Ghost Spider,” in Incredible Hulks Annual #1 from 2010, Peter Parker meets “The Amazing Spider,” a Peter Parker from Earth-11638 where Uncle Ben lived and Peter became a rich, successful, and popular superhero. Dude even had a cape!

But when Peter was killed, he was resurrected with the help of Bruce Banner, Sorcerer Supreme, and reborn as Ghost Spider (not to be confused with “Ghost-Spider,” the Gwen Stacy on Earth-65).

Where to read: The Incredible Hulks Annual #1

On Earth-312500, Spider-Man killed Kraven the Hunter and is on the lam. In a dark twist, this Spider-Man would find himself shot dead by the NYPD on the grave of his beloved Aunt May.

Where to read: The Amazing Spider-Man #500

When the Sinister Six came attacking in the storyline “Ends of the Earth” (beginning with Amazing Spider-Man #682), Peter used his Horizon Labs resources to build an armored costume equipped with defense protocols against the Sinister Six.

Where to read: Spider-Man: Ends of the Earth

First introduced in Amazing Spider-Man #365, which commemorated the 30th anniversary of the web-slinger, the futuristic Spider-Man of Earth-928, Miguel O’Hara made his debut as “Spider-Man 2099” before starring in his own series.

In the aftermath of 2014’s Spider-Verse and 2015’s Secret Wars, Miguel O’Hara is stranded in the modern day. With the help of Peter Parker, Miguel gets a job at Parker Industries and is given a new white costume.

Like the Advanced Suit, Velocity is an original creation by comic book cover artist Adi Granov for Insomniac. Evidenced by the power bonus the suit comes with, the costume is engineered for Spidey to be quicker on his feet.

Another Insomniac original that Peter builds in order to fight one of his greatest enemies.

After Secret Wars, the Marvel Universe found itself in an all-new, all-different place. But one thing that didn’t change was Peter Parker as Spider-Man. As CEO of Parker Industries, Peter publicly revealed he would be Spider-Man’s primary gadget developer. This included a new, high-tech variation of the classic red and blue costume with a distinct glowing spider insignia.

The “MK. IV” costume came with all of the extras and features you expect from a Stark product, but at its core it was 100% a pure Parker production.