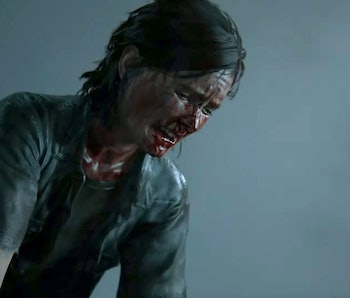 Naughty Dog and Sony Interactive Entertainment released a new trailer for The Last of Us Part II, and it hints that many of the devastating plot beats revealed in the major leaks from earlier this month will be true when the game releases. The trailer, which was first teased on Tuesday, gives us a glimpse at Ellie's descent into a revenge-fueled madness after some devastating event. But it's a much more nuanced and emotional journey than what was implied in the leaks.

What's in the trailer? Wednesday's new trailer focuses on the game's story rather than gameplay elements, putting Ellie and Joel center stage to show us how their relationship has evolved since the conclusion of the first game. We even see some new footage with a younger Ellie, hinting that the sequel's prologue may be something of an epilogue to the first game — or that we'll see some flashbacks to the past in the sequel.

"I know you wish things were different," Joel says to Ellie as the trailer opens. "I wish things were different ... but they aint." The official logline for the game indicates that Ellie will go on a quest for revenge, and most of the trailer shows her brutally killing other non-infected humans. She also looks miserable and strained, implying that some dramatic event has set her upon this quest.

What's new? We do get closer looks at gameplay. The Last of Us Part 2 will have more open-ended gameplay than original, and will seemingly let players loose in wider, open-world areas. Unfortunately, there isn't a lot of new information here, with scenes mainly focusing on Ellie's descent into more rageful and violent behavior. Rather than a struggle for survival, Ellie's seeking the violence for reasons we don't quite understand just yet. There are many interesting scenes that show off dynamic situations, like Ellie firing a gun from the back of a vehicle as enemies pursue her in a vehicle of their own.

If you've been chomping at the bit for more information on new characters or plot events, that's not here. Because the story-based scenes are presented outside of their proper context, so it's difficult to read any kind of throughline.

Major spoilers for The Last of Us Part II leaks follow.

Does it address the leak? A massive The Last of Us Part 2 plot and gameplay leak perpetrated by hackers took place in April 2020, and by early May, important story details were leaked on the internet. To summarize, a new character named Abby kills Joel somewhat early in the game, and that sets Ellie on a violent quest for revenge.

"We do this smart, we'll be leaving Jackson vulnerable," Joel's brother Tommy says in the trailer to Ellie. "So they just get to get away with this?" she replies. That's when Ellie's violence kicks into high gear and she pursues and kills people for reasons we don't quite understand, but given what we know of the leaks, it's clear that Tommy and Ellie debrief after Joel's death and make plans for revenge — but that's only apparent if you go into this trailer knowing the leaks.

The Inverse Analysis — The trailer was a bit underwhelming when one considers how long the gap between new trailers on the game has been, but it still teased some interesting character work. At this point though, it's clear that Naughty Dog doesn't want fans to know that much about how the game will play out before going in, so it's unfortunate that The Last of Us Part 2's plot had to leak as it did.

Looking at this footage in a post-leak era is a weird experience, especially when you know where some of the characters end up. As the trailer chooses to sidestep what was in them completely, this trailer may leave you feeling a bit unfulfilled.

Regardless, Naughty Dog's dedication to quality does shine through in the trailer, with very impressive graphics and exhilarating gameplay sequences teased. Even though the trailer doesn't do much to address the plot details or elements contained in the leaks, you should still this trailer a shot to renew your excitement for The Last of Us Part 2 if you were dissuaded by the leaks.