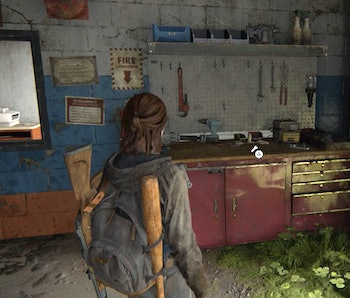 After seven long years since the launch of its groundbreaking predecessor, Naughty Dog's The Last of Us Part II is finally here. Ellie's journey will take her through hordes of fungal zombies, pit her against armed militias, and see her wrestle with the many demons of her traumatic past. In other words, you're gonna need some deadly weapons. As you make your way through Seattle, you'll come across a lot of scattered mechanical parts that can be used at workbenches to make your one-woman arsenal even stronger. Here's our picks for the essential TLOU 2 weapon upgrades.

Ellie can obtain five upgradeable weapons throughout the campaign — Semi-Auto Pistol, Bolt-Action Rifle, Revolver, Pump Shotgun, and Bow. The weapons you use most will vary depending on your playstyle, but at some point, there's a use for all of them. Here are our picks for the top-priority upgrade for each one, with the number in parentheses indicating the number of parts needed for the enhancement.

Semi-Auto Pistol — Fire Rate (40). This is your basic, all-around handgun. You'll find a lot of ammo for it scattered around, but it's not gonna be super useful for tougher Infected enemies. Basically, you'll want this for quick damage while someone's rushing you or while you're evading a swarm. This is the weapon to use when the situation calls for speed and evasion, not big damage, so enhancing the Fire Rate is the way to go here.

Bolt-Action Rifle — 6X Scope (80). It's on the pricier end of the upgrade spectrum, but your primary use for the rifle is gonna be long-distance headshots from cover. Damage (100) is nice to have if you've got parts to spare, but generally, your shotgun or revolver is gonna be better for close-up damage.

Revolver — Damage (70). Revolver ammo isn't as common as you'd hope, and you'll need to use it somewhat sparingly. It's best to save these bad boys for Infected or big tough human baddies with daunting melee weapons. The reload is awfully slow (and a great second-choice upgrade for 50) but you're better off swapping weapons than burning through all your revolver ammo in one fell swoop.

Pump Shotgun — Fire Rate (40). The shotgun is great for tough Infected enemies, and you'll want to get shots off fast and hightail it out of there, so Fire Rate gets the slight edge. Capacity (50) is a good second pick.

Bow — Rangefinder (80). It's not as essential if you're using aim assist, but Ellie's bow can be a little fiddly to use when the action gets frantic. This upgrade helps to assure you won't blow your cover by missing a stealthy headshot and accidentally leaving one of your foes alive.

Spoilers ahead for the second half of TLOU 2, after Seattle Day 3.

After the scenes in the theater, you shift from playing as Ellie to controlling Abby. She has a different arsenal of five upgradeable weapons — Military Pistol, Semi-Auto Rifle, Hunting Pistol, Double Barrel Shotgun, and Crossbow. (Her sixth weapon, the Flamethrower, cannot be upgraded.)

Military Pistol — Fire Rate (40). As was the case for Ellie, this isn't your core damage-dealer, but something for quick damage on the run, or when you're low on more powerful ammo. Silencers come in particularly handy for picking off a horde of enemies scattered around a large environment, without attracting too much attention.

Semi-Auto Rifle — Burst Fire (80). You'll find a lot of ammo for this on various missions, but you can't carry very much at one time. This is the best use of those resources, plus this is the only weapon that has this burst feature. It's equally handy for when you're being rushed by human enemies or whittling down a big, hulking infected.

Hunting Pistol — 4x Scope (60). This is Abby's go-to distance headshotter, but it's a bit more versatile and useful than Ellie's rifle. This one will be handy in picking off members of large groups in some of Abby's later maps, and you can make your own ammo. Damage (80) is a nice second choice but you'll benefit more from a tweak that lets you nail those headshots.

Double Barrel Shotgun — Reload Speed (40). While increased damage is also tempting, one of the main uses of your shotgun is staggering big, bad Infected monsters like the Rat King. Reloading faster means more staggering, making it harder for foes to charge straight at you.

Crossbow — Reload Speed (80). Assuming you're using the Hunting Pistol as your scoped weapon, the Crossbow is effective for medium-distance crowd control on the quiet. This weapon is best suited to middle-distance crowd control, when you need to thin some numbers quietly and from behind cover, so acting fast is key. From there, you can always charge in with your shotgun at the ready.

The Last of Us Part II is out now for PS4.

More like this
Gaming
6.23.2022 12:30 PM
Known gamer Ted Cruz would love these 6 pay-to-win games
By Willa Rowe
Gaming
12 hours ago
FF7 Rebirth could change the original’s most important twist
By Willa Rowe
Gaming
7 hours ago
15 years later, the smartest shooter ever made still holds up
By Joseph Yaden
Related Tags
Share: