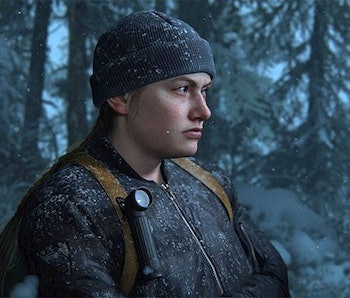 Naughty Dog's The Last of Us Part II has proven to be one of the most divisive games of the year, and according to an interview published Monday by IGN with the game's director, the introduction of its most controversial character almost turned out very differently.

This article contains spoilers for The Last of Us Part II.

Abby has proven to be perhaps the more divisive characters from The Last of Us Part 2 for a number of reasons, chief among them being the fact that she kills Joel early in the game following only a brief introduction. This sets Ellie off on a quest for revenge. It's all very fast-paced and straightforward, but director Neil Druckmann revealed to IGN as part of an interview published Monday that in an earlier version of the script, Abby’s first appearance played out very differently.

“The game initially was this open world thing," Druckmann said. "And you spent all this time in Jackson." In the final version of the game, we only spend a few streamlined hours in Ellie and Joel's home of Jackson, Wyoming before Abby kills Joel and Ellie begins her quest. But in this alternate version, Abby sticks around for a stretch of time.

This original introduction of Abby was clearly much more of a slow burn and would’ve added several more hours to what is already a surprisingly long single-player game. But more importantly, it would have stalled the main catalyst for the entire story.

Druckmann also admitted that Abby's prominent role in the final version of Last of Us 2 is far smaller than initially intended. "Abby was the concept that made us want to make this game about empathy, interactivity; knowing we could use Joel and Ellie to create that feeling right at the beginning," Druckmann said. "Her role actually kept shrinking and shrinking until we thought this is the right amount for what we need you to feel about Abby."

The Inverse Analysis — In the final version of the game, we first meet Abby on the outskirts of Jackson, and she just so happens to run into Joel in the wintery wilderness. They fend off a bunch of Infected together with Joel's brother Tommy before they all take refuge in a mansion full of Abby's companions.

All of this feels like a stretch of logic for the sake of advancing the plot in what's otherwise a pretty brilliant game. Finding out that this replaced a different sequence of events that was a much slower burn makes a lot more sense, though I’m still not the biggest fan of the final plot point that feels much too convenient. For pacing's sake, it does work.

Regardless, this interview also shows how much a story-based game can change over the course of. development. If you assumed that Naughty Dog was working with the same script or The Last of Us Part 2 from the start, this proves that it evolved over time to best fit the narrative. While the game has been divisive, to say the least, a peek behind the curtain into how the story was written remains intriguing.

The Last of Us Part II is available now for PS4.