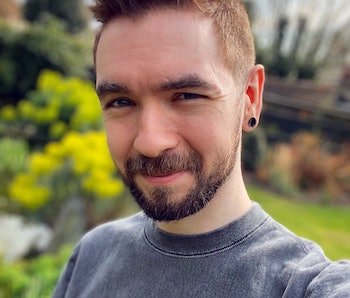 As video games become the center of mainstream culture, some of gaming’s biggest celebrities have been forced to reckon with the industry's ugly underbelly.

In July, the state of California filed suit against Activision Blizzard, the developer and publisher behind smash-hit series including Call of Duty, Overwatch, and World of Warcraft. The lawsuit alleges widespread gender-based discrimination and harassment at the company, prompting a walkout from current staff, boycotts of Activision Blizzard games by fans and streamers, and a deluge of discussion about toxic masculinity in gaming culture.

In response, some popular streamers pivoted from games like Call of Duty and Overwatch to rival titles from less problematic studios. Others have done their best to avoid discussing the issue entirely.

Jacksepticeye (real name Seán McLoughlin) — who has more than 27 million subscribers on YouTube and makes his cinematic debut with Disney’s Free Guy — tells Inverse he doesn’t see the Activision Blizzard lawsuit as part of what he does. But he does acknowledge the issues both within the company and the gaming community at large.

“My knowledge of it is kind of like headlines and blurbs here and there, but what I've been hearing is absolutely ridiculous. Blizzard and Activision stuff has kind of been bubbling up on the surface for a long time. There's been stuff in the past with their games that people weren't happy with,” Jack tells Inverse. “Now it seems like it's kind of bleeding into the company.”

While there are plenty of examples of things players “weren’t happy with” about Activision Blizzard games over the years, one notable example is a resurfaced video from BlizzCon 2010. The now-viral footage shows an all-male panel of developers mocking a female World of Warcraft fan who asked for less overtly sexualized character designs.

Jack demurred from getting too specific about the allegations against Activision Blizzard, though he had more to say about the broader problems facing gaming culture.

“I don't really want to get too involved in it because I don't know enough — it would be giving out bad information,” he says. “I just yell at video games!”

(He’s being modest — he does a lot more than just “yell at video games.” Since 2017, he’s used his platform to raise more than $6 million in donations to organizations including Hope From Home, Save the Children, and Color of Change.)

The companies that make games are slowly becoming a more accurate reflection of the diverse audiences who play them. But Jack points out that controversies like the Activision Blizzard lawsuit are a reminder that the culture around games also needs to become more inclusive.

“I thought that stuff had gone away. I thought that was back in, like, the early Call of Duty days. It’s really sad to see that some aspects of that still remain,” he says. “But you see it all the time if you go live on Twitch. Some of that ‘Chad energy’ will come out, and people will say things under the immunity of ‘gamer words,’ which is obviously just ridiculous.”

Twitch — the video game streaming platform owned by Amazon — has seen an uptick in hate speech and abuse since the May addition of a new tagging system that makes it easier for bad actors to single out streamers belonging to specific identity categories, like transgender, Black, or disabled.

Still, he’s optimistic. Jack maintains that the gaming community will continue to grow more welcoming to people of differing backgrounds and perspectives.

“I hope whatever culture we're shifting towards is in that more accepting, open space. There's still a lot of groundwork to be doing, just like in real life and things like LGBTQ representation. But I think we're going in the right direction.”