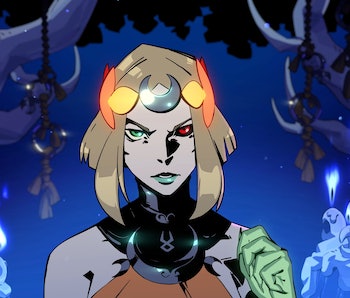 One of the greatest games ever made sees a charming and bold young lad defying his father to fight his way out of an endlessly shifting hellscape. Originally released in 2018, the groundbreaking Hades is a roguelike dungeon-crawler rooted in Greek myth, but its compelling combat is only enhanced by an enchanting art style and superb voice acting. One of the most shocking reveals early in The Game Awards 2022 was a dazzling trailer for Hades II.

The trailer opens with two shadowed figures dueling in the moonlight, and the same Hades art style is immediately recognizable. Both appear in the moonlight, with the smaller wielding two daggers and wearing a fiery feathered crown. Check it out:

Hades II focuses on the “princess of the underworld” named Melinoë who is indeed the sister of Zagreus, the protagonist from the first game. Like Zagreus, she has complete heterochromia — meaning that her eyes are different colors. Except Zag’s left eye is blue and his right red. For Mel, it is the opposite.

In the trailer, she duels with a mentor figure who’s a female wizard wielding two staves and some seriously powerful magic. The wizard is able to best the princess with a rune magic trap. After their duel, the mentor wishes for “death to Chronos,” who in Greek mythology is the Titan of Time and the father of Hades. The Titans, of course, were the precursors to the Greek gods who after a long and bloody war, were imprisoned by the Olympians. Hades II takes place sometime after the first game when Chronos “has escaped his imprisonment in the depths of the Underworld to wage war on Olympus.”

It’s probable that Hecate is the witch teaching Melinoë her skills.

After the opening scene of the trailer, Melinoë proceeds through some kind of portal, and we get a look at combat. Anyone who’s played the first Hades will immediately recognize the resemblance, though Hades II does seem to put more emphasis on magical abilities with a large area of effect. A blog post on Steam notes that she wields “dark sorcery” connected to the “dawn of witchcraft.”

And gone are many of the gods from the first game. In their place are characters with new skills to offer:

Things are pretty disorienting storywise until much later in the trailer, but the mentor figure does say “vengeance for your family awaits you,” which is an ominous hint that something has happened to all your favorite gods from the first game. We hear a quote from Hades himself and see him in chains, warning that “time cannot be stopped,” but the princess says, “Wait for me, father. I’ll be there soon.” So what happened to Zag?

Hades II is currently in development and will arrive on Steam for an early access period sometime during 2023 before a full launch sometime later.