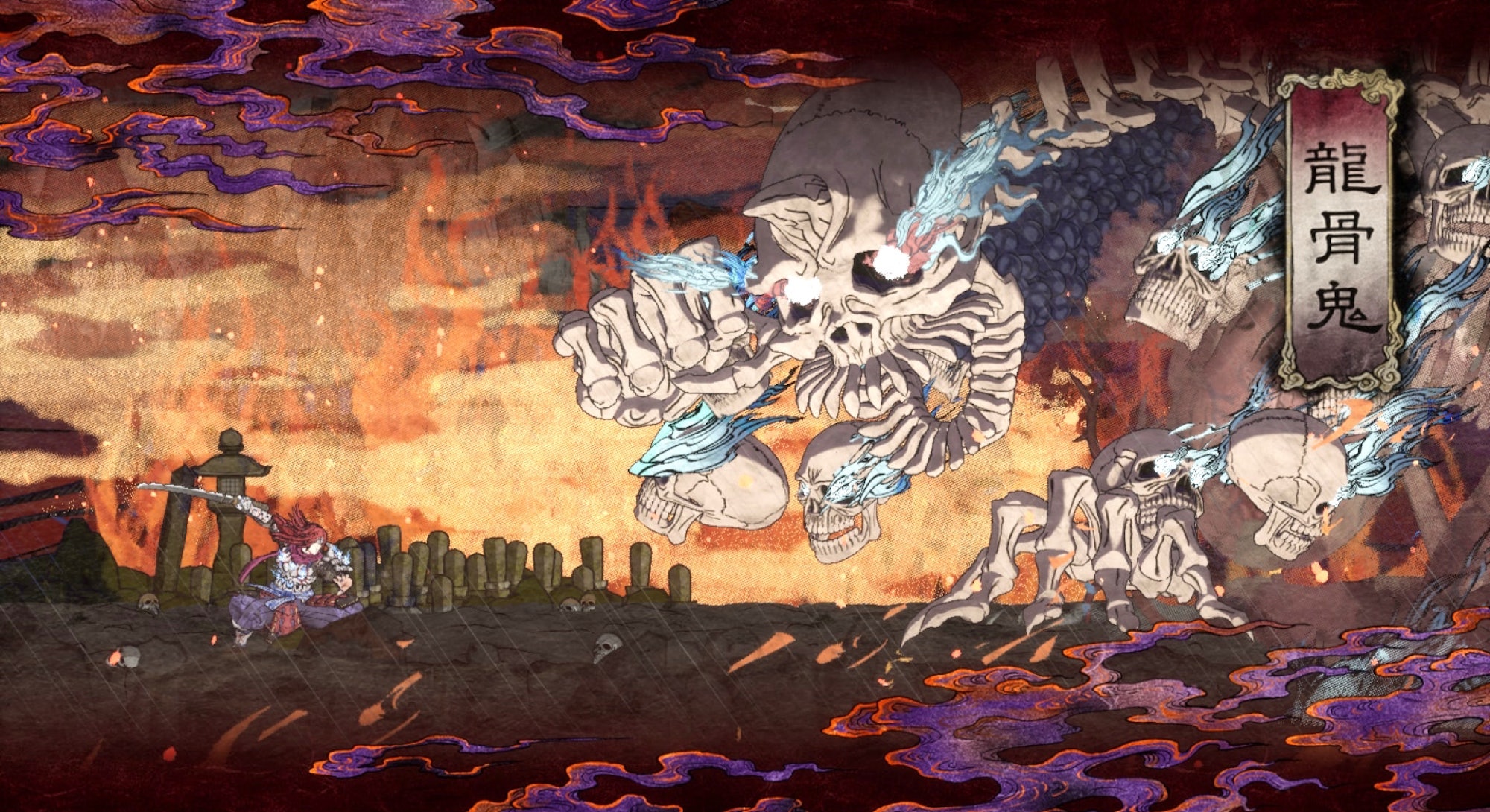 Famed Japanese video game publisher Konami hasn’t put out a bonafide hit since 2015, but all that might be about to change.

In this roguelike — or “roguevania” as Konami aptly calls it — players descend into hell on repeated runs, upgrading their character and weapons as they go deeper and deeper. It’s slower-paced than some of its roguelike peers, but the tense fights make players constantly adjust their weapons on the fly. You also have to weigh which enemies are worth engaging with when every bombastic boss fight looms ahead.

By reviving a mostly unknown Japan-only series, Konami and developer GuruGuru avoid the pressure that something like a new Silent Hill would attract. GetsuFumaDen feels like a solid base for a new experience within an emerging genre. From there, the publisher can only stand to expand its potential reach.

While there is certainly room for improvement, GetsuFumaDen learns from the best roguelikes to create a methodical and satisfying experience. Typical of the genre, the layout of each run randomly generated, and the gorgeous art style keeps things engaging. It makes for the kind of refreshing change of pace Konami needs right now.

GetsuFumaDen: Undying Moon is connected to a game that most western gamers haven't played. Ryukotsuki, the villain from the original game, has reemerged 1,000 years later. As the 27th head of the Getsu Clan, you must descend into the pits of hell to take Ryukotsuki down.

When it comes to gameplay, Undying Moon expands the 2D action-platformer segments of the original GetsuFumaDen into a somewhat slow roguelike that functions like a slower-paced Dead Cells. With each run, you slay enemies and gain levels as you plunge deeper.

Each of the two main weapons and two sub-weapons you wield can be upgraded during and between runs with items you find. Even in this early access stage, weapons feel distinct and enjoyable with enough variety to keep things fresh. I gravitated towards the heavier weapons that hit the hardest, though these often have long wind-ups and cooldowns that leave you vulnerable.

There’s also a dodge roll move that practically invites comparisons to Dark Souls. You also literally claim the souls of some enemies after killing them, which can then be used to boost your weapons and health during runs. After getting several kills in a row, your reward is the Demonization state that powers up your character until you take damage. On top of that, GetsuFumaDen: Undying Moon features weapon and character progression systems familiar to fans of roguelikes.

So there winds up being a lot you have to pay attention to. There are things to upgrade both in the middle of and between runs, so the game is already quite engaging even though it’s incomplete. The beautiful visuals based on Ukiyo-e art — just like Okami and World of Demons — are worth the price of admission alone. Each background is a dynamic but stunning painting that animates as you move through it, and the levels eschew generic hellish themes to deliver more than a few surprises we won’t spoil here.

It’d be easier to get lost in the art if the game weren’t so challenging. It’s worth watching livestreams for that reason alone, even if you don’t play it yourself. This beautiful title is a welcome change after the absolutely ugly Contra: Rogue Corps.

There are still many areas where GetsuFumaDen can improve, which makes sense given it’s still in early access. Some enemies don't react or even stagger much after being hit, which lessens the impact of each attack. Enemy attacks can also blend into some of the game's busier backgrounds. Whenever you do die, the screen cuts to black too quickly, making it hard to even comprehend what happened in some cases.

Gathering the materials required for upgrades is a time-consuming slog at first. It'll be a few hours before you truly start to see the impact of run-to-run progression in any noticeable manner. The procedural generation sometimes leads to awkward paths that lead nowhere as well. The pretty environments can only do so much to cover for those flaws and oddities.

While these issues are a bit frustrating and prevent the game from reaching the heights of something like Dead Cells or Hades in its current early access form, this is still a solid roguelike. The full 1.0 launch is aiming for a 2022 release, so Konami has a lot of time to fix these issues and to add new characters, modes, levels, and weapons.

It certainly leaves the most significant lasting impression of any Konami game since Metal Gear Solid V: The Phantom Pain. Any fan of roguelikes should at least give GetusFumaDen: Undying Moon a chance.

It's too soon to say whether or not this is a comeback for Konami, but if the publisher gives future titles the same love and care that went into GetsuFumaDen: Undying Moon, they may be on the right track.