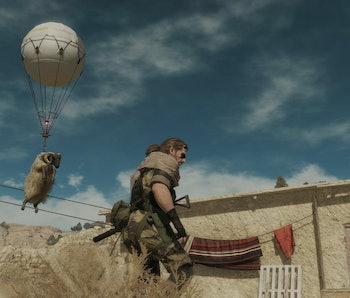 Metal Gear Solid V: The Phantom Pain, a game about a one-eyed man and his binoculars, is quite good. This is not surprising, given the franchise’s 28-year history of pumping out fantastic, if occasionally bloated, video games. The latest incarnation expands on an offbeat game mechanic called the Fulton Recovery System (and another offbeat game mechanic not officially named Tactical Horse Poo), neither of which are terribly surprising given the franchise’s 28-year history of whimsical technology and poop jokes.

The Fulton Skyhook Air Rescue System is a real means of extracting personnel from behind enemy lines. The namesake and creator, Robert Edison Fulton Jr. invented seven components that, when combined, formed the recovery system. He was inspired by earlier systems that used poles for surface-to-air extractions, but balloons allowed planes to fly at higher, safer altitudes. The device consists of one miniature helium blimp lift, one nylon harness, one V-shaped hook on the end of an aircraft, and an aircraft. You may have seen this method of bad guy extraction violate international airspace treaties in such films as The Dark Knight.

As Metal Gear Solid’s Big Boss, you can Fulton Recover enemy combatants to recruit them to your side. You can also snag anything from wolf puppies to Jeeps to mountain sheep. And there is some historical precedent to Big Boss’ zoological outings, as the first live thing Fulton attached to his system was a pig; according to CIA legend the pig not only survived but was pissed off enough to attack the pilots.

From a player’s perspective Metal Gear, the game, leaves out the less-fun logistics of coordinating a low-flying C-130 Hercules (though bad weather can cause Fulton extractions to fail). The video game also diverges from real life vis-a-vis physics: The acceleration was closer to that of an escaped party balloon than getting jerked into the stratosphere by an angling Wind God.

“It’s not as violent as a parachute opening,” Tom Crouch, PhD, a historian and curator at the Smithsonian’s Air and Space Museum in Washington, D.C., tells Inverse. “You went straight up for the first 100 feet or so and then streamed behind the aircraft.”

Even so, the whole thing did look sort of ridiculous, particularly when told by old-timey CIA instruction booklets.

In 1962, the CIA first used the Skyhook to recover agents from an abandoned Soviet sub base in the Arctic. The American military quietly deployed the Skyhook until the ‘90s, when balloons were phased out thanks to advancements in helicopter technology. The Skyhook and rescue device leave a legacy that the Air and Space Museum describes as “perhaps [Fulton’s] most unsung but bold aerial successes.”

Even now, Crouch says, the Fulton system is used to collect mail above hard-to-reach places like remote Arctic outposts. “The oldest means of flight,” he says, meaning the 1793 invention of balloons, “are still with us.”

With a name like Robert Edison Fulton Jr., the inventions didn’t stop there — the Skyhook inspired sea and air-to-air versions. Plus, Fulton created the Airphibian, a car that flew on FAA-certified airplane wings. Your move, Metal Gear.