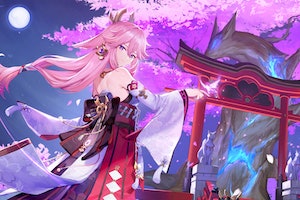 It's officially confirmed: Yae Miko arrives in Genshin Impact on February 16, much to the happiness of foxy shrine maid fans everywhere. Unlike Shenhe or Yun Jin, Yae is a catalyst-user and the first Electro one we've had since Lisa launched with the game. She's got some pretty cool-looking animations, too, making thunderbolts rain from the sky to shock and skewer enemies.

There's still a little time to go before Genshin Impact 2.5 — enough to take part in the Lantern Rite event and grab yourself a free character if you haven't already. More importantly, it gives you a chance to farm some Yae Miko materials if you plan to grab her when she does release.

As usual, we already know all of the materials that Yae needs (thanks Honey Hunter), and you can get all of them right now except her weekly boss materials, which should come from the new Raiden Shogun boss that we were shown in the 2.5 special program. In this Genshin Impact Yae Miko materials guide, I'll run through what you need, as well as where you can find each.

Where to find Yae Miko's ascension materials in Genshin Impact

Here's where to get each of Yae Miko's character and talent ascension materials:

For Yae Miko you'll need Vajrada Amethyst, the usual ascension jewel for Electro characters that you can get from the Electro Hypostasis and Thunder Manifestation bosses. In this case, though, you should fight the Bathysmal Vishap boss in Enkanomiya, as that also gets you the Dragonheir's False Fin material that you're going to need lots of.

Since bosses respawn quickly, just warp away after beating it, then return after a few minutes to rinse and repeat. If you have some Dust of Azoth, you can also convert other gems into Vajrada Amethyst, though the only way to get this conversion material is through Paimon's Bargains with Stardust.

These water-based plants that resemble sea anemones can be found all over Inazuma, but particularly on Watatsumi, Yashiori, and Kannazuka island. You can see their exact locations on the official Genshin Impact map. There are 152 Sea Ganoderma altogether, which comes pretty close to the 164 that you require. Luckily, you can also purchase some from Obata the Fisherman in Ritou every couple of days, and that should help round it out.

These enemy drops come from defeating any of the Nobushi swordsmen you encounter in Inazuma. If you also want to earn Mora and EXP materials at the same time, I greatly recommend doing the Inazuma blossoms of wealth and wisdom, as they frequently appear among the enemies you fight. For a quick little farm, you can also head to the little island north of Narukami, which is a small bandit stronghold. Finally, you can purchase a certain amount from Paimon's Bargains if you happen to have any spare Stardust lying around

These talent ascension materials come from the Violet Court Domain in Inazuma, and you can get them on Wednesdays, Saturdays, and Sundays. In order to reduce farming time, it's best to grab some Crystal Flies for their Crystal Cores to make Condensed Resin at the Alchemy Bench. This form of resin is super useful for farming since it lets you grab two lots of rewards at once, and so halves the number of times you have to complete a Domain. If you don't have the Condensed Resin formula, you get it as a reward for gaining Level 3 reputation in Inazuma.

The name of this material is currently a mystery, but it will belong to the new weekly Raiden Shogun boss that arrives in version 2.5. This won't be like the times you fought her in the Inazuma Archon quest, though, as she looks like she'll be fighting inside some kind of floating puppet armor. As with other weekly boss materials, you'll also be able to craft this from any of her other drops provided you have some Dream Solvent.

These rare talent ascension materials are required to 'crown' a talent, unlocking its maximum level. You can get three of them from leveling the Sacred Sakura in Inazuma with Electro Sigils, and one from upgrading the Frostbearing Tree in Dragonspine with Crimson Agates. Lastly, you get these from seasonal events like the current Lantern Rite, where you can purchase the Crown using the currency in the event shop.

And that's every Genshin Impact Yae Miko material and where to find each. Good luck with getting her!