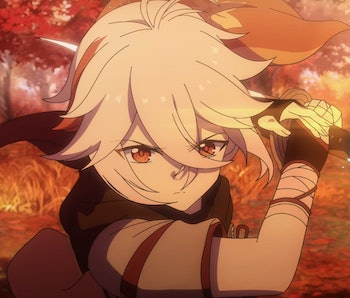 Time is just an illusion — or it might just seem that way. HoYoverse just dropped two Genshin Impact update dates and confirmed a time for the long-awaited Genshin Impact 2.7 livestream. It’s true that leaks and information about Genshin Impact 2.8 would be expected around now, but wow. Fans can look forward to a schedule for when to expect the next two content drops and, luckily, leakers have started digging early so we know what summer fun is waiting in the next, next update. Here’s what we know so far about Genshin Impact version 2.8.

When is the Genshin Impact version 2.8 update?

Genshin Impact 2.8 will launch on July 13, 2022. With that, HoYoverse is back to its typical schedule of six weeks between updates. Maintenance should last approximately five hours from 6 p.m. ET to 11 p.m. Eastern. Expect 300 Primogems for maintenance compensation.

What are the Genshin Impact version 2.8 character banners?

The Genshin Impact 2.8 banners are still mostly a mystery — except for Kazuha. Leaks about his story quest and involvement in the main event make the easygoing ronin a highly possible pick. However, it’s unclear which half of the update will feature him. Shikanoin Heizou is also expected to debut as an accompanying four-star on one of the banners.

Are there new costumes for Diluc and Fischl in Genshin Impact version 2.8?

Genshin Impact 2.8 leaks heavily support incoming skins for Diluc and Fischl. Diluc would be the first male character to get an alternate outfit in Genshin Impact. If true, he and Fishcl would join Jean, Barbara, Ningguang, Keqing, Amber, Rosaria, and Mona as the only characters in the game with skins. We have no idea what the alternate costumes look like, but one leak suggests that Diluc’s outfit will look similar to a Dark Knight costume he wore in the Genshin Impact comic. Ubatcha also posted codenames that might hint at what to expect from these costumes.

What are the Genshin Impact version 2.8 events?

Many leakers agree that Genshin Impact 2.8 will introduce a region similar to last year’s Golden Apple Archipelago along with an event called “A Summer Sea Sojourn,” starring Fischl, Oz, Kaedehara Kazuha, Xinyan, Yun Jin, Mona, Venti, and Xiangling. Nahida (the supposed name of the Dendro Archon) will also appear during the event. Participants have the opportunity to earn a free Fischl as a reward.

This Golden Apple Archipelago “rerun” might also be here to stay. Genshin leaker Ubatcha noted that they didn’t seem to be an expiration date in the beta, which implies that they’re permanent. However, there’s an “overlay” called the Bonsai Mountains that does have a time limit. Ubatcha also mentioned that the islands don’t appear on the overworld map but are “underground” like Ekanomiya and the Chasm.

What quests can I expect in Genshin Impact version 2.8?

As per Project Celestia, Kaedehara Kazuha will finally receive his own story quest. Fellow leaker Ubatcha also posted about the possibility of a Kazuha story quest months ago and seems to back the premise that it exists. It’s wild, considering it's been months since Kazuha’s debut and the importance of his role in the Inazuma story arc. Shikanoin Heizou will also apparently come with his own set of hangout events in Genshin Impact 2.8.

As more information is made available about Version 2.8, we’ll update this article accordingly.