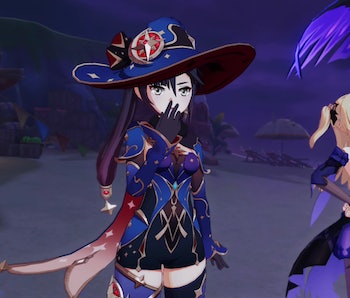 Genshin Impact 2.8 brings back the the Golden Apple Archipelago for a new year of summer fun. The Summer Fantasia event features a new adventure in the fan favorite islands, starring the Prinzessin, Fischl, and her crew of retainers: Kazuha, Xinyan, and Mona. Echoing Conches — or, in this case, Phantasmal Conches — have also returned in this iteration of the isles.

The Phantasmal Conches piece together a story with their separate recordings and images. These mysterious shells don’t replay the thundering waves of the ocean, but the sound (and images) of dialogues that took place between Fatui travelers in the area. However, there’s an even more important reason to collect them: It’s the only way to unlock the new Fischl skin for free.

Here’s how to find all the Phantasmal Conches you need to unlock the Prinzessin’s formalwear.

How many conches do I need for the Fischl skin?

You need 16 Phantasmal Conches to claim the Fischl skin for free. There are 20 conches total, the last four of which can be found in domains related to the event’s featured characters. These are the “Sojourner’s Song” conches in the Resonating Visions event menu. Only 14 of the 16 “The Photographer’s Words” conches can be found without playing through any of the event quests.

The Summer Fantasia event quests dive into the inner domains of Kazuha, Xinyan, and Fischl, which each gift you at least one more conch. Other Phantasmal Conches also appear after completing their domains. Fischl’s in particular spawns a whole other section on Twinning Isle. At the very least, you need to complete Kazuha’s domain and a part of Xinyan’s.

As mentioned earlier, you can find 14 conches before even starting a character domain. This is the breakdown of how many you can expect to find.

Broken Isle conches might be the most straightforward. There isn’t any rock climbing involved. Just venture about the beach when you see the conch icons pop up on the map and you should find them. You can find three on the main island, one on the smaller one next to it, and another one on the more isolated island in the bottom right of the above map. That should be five conches total.

There’s actually one more conch, but you need to complete Xinyan’s domain to unlock it. Return to the main island after finishing her domain and search the bottom half of the island near the beach (between the bottom star and the wave rider point).

Twinning Isle only has three conches at the beginning of the event. There’s two on the upper main island and another on one of the smaller islands in the bottom right of the map above. These aren’t the last conches, though. More appear during Fischl’s portion of the event.

Pudding Isle has three conches. One of them is on the peak of the mountain next to the Waypoint. If you miss it, at least it’s easy to teleport back to check!

Minacious Isle has three conches. There’s one in the hollow of the mountain, and another on top of it called the “Misplaced Conch.” You should see a purple Fatui soldier looking down into the hollow from the top. Below the Fatui is an Imaging Conch next to a bramble of branches.

The remaining Phantasmal Conches can be found either in one of the character domains or after completing them. There should be six more to find.

Kazuha’s domain comes first in the Golden Apple Archipelago adventure. It revolves around how the Kaedeharas were a family of craftsmen until Kazuha relinquished the business to travel the world. There are a few parts, each which require finding a couple of materials before diving into the domain again, until the last part where you find the first conch inside a hectic Inazuma subspace.

The conch inside Xinyan’s domain should pop up as an icon as you traverse the space. It should be on top of a rock rather than on the floor where you can see by simply walking.

After completing the domain, return to Broken Isle. The landscape should be visibly different, along with a new conch in the area below.

Inside Fischl’s domain should be a desk with a conch on it, much like in Kazuha’s domain. You should find it naturally by continuing through the subspace.

The second conch can be found outside of Fischl’s domain. Her part of the story morphs Twinning Isle into a fantasy world. In the upper most island, you can find a trio of ravens (that look a lot like Oz) chatting around a well. Inside the well is one of the conches.

The last conch can be found by finishing the Phantasmal Tales domain. After nabbing the 20th conch, you can claim a sizeable sum of Mora, Weapon Enhancement Ores, and Hero’s Wit for your troubles.