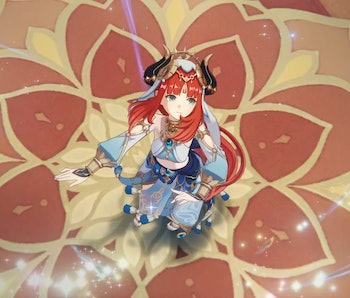 Nilou has it all. The battle prowess and the dance moves? The Grand Bazaar’s star performer became a fan favorite because of her graceful beauty and role in the Sumeru Archon Quest story. Even better, she’s a Lesser Lord Kusanali devotee. Later leaks also told us that she would be the first Hydro character to really hone in on the new Dendro plus Hydro reactions. In short, she’s a Bloom enabler, and it’s something fans can’t wait to experiment with once she arrives in Genshin Impact 3.2. Here’s what you need to farm for Nilou ahead of her banner.

Nilou’s ascension materials have been leaked ahead of time thanks to an upload onto Genshin Impact database, Project Amber. Here’s what you need to fully ascend her:

1. Where to find Varunada Lazurite

Varunada Lazurite is a must-have for any Hydro characters. Any eligible Normal or Weekly bosses will do, but Aeonblight Drake is recommended because Nilou also needs its Perpetual Caliber drops. Here’s the full list of bosses that drop Varunda Lazurite and its variations:

Normal bosses respawn every few minutes, so you can farm them multiple times a day. Weekly ones can only offer rewards once a week. Note that the gems (whether they are Slivers or Gemstones, not the element) vary depending on your World Level.

2. Where to find Fungal Spores

Be careful about the elements you use while farming! The Activated and Scorched statuses don’t just apply to mushroom trampolines and environmental obstacles but to actual enemies. If activated or scorched, Fungi enemies will drop Fungal Nucleuses instead of spores. So, avoid attacking them directly with Electro (Activated) or Pyro (Scorched).

3. Where to find Perpetual Caliber

Nilou’s boss drops, Perpetual Caliber, come from the Aeon Blightdrake. It’s one of the latest bosses introduced in Genshin Impact 3.1. It doesn’t need any prerequisites to unlock.

Padisarah work like any other farmable flower in Genshin Impact. Just farm them from the same lush landscapes every 24 hours or so. The easiest places to harvest these elegant purple flowers are near Alcazarzaray, Sumeru City, and Pardis Dhvai (as seen in Genshin Lab). These all have at least a few teleportation points near the hotspots. Vanarana also has a significant number of them, even if the spawns are less convenient.

Note: You can also buy five Padisarah from a stall in the Grand Bazaar.

These are the Talent Materials needed to raise Nilou’s Normal Attack, Elemental Skill, and Elemental Burst to Level 10.

5. Where to find Praxis books

Teachings of Praxis and its higher-level iterations can be found in the Steeple of Ignorance domain in Sumeru near Chatrakam Cave. Visit on Wednesdays, Saturdays, and Sundays to farm them in bulk.

6. Where to find Mudra of the Malefic General

Raiden Shogun’s “Magatsu Mitake Narukami no Mikoto” is the only boss that drops Mudra of the Malefic General. Unfortunately, you’re not always guaranteed to get it. It’s only one of three possible weekly drops. You can convert unwanted Raiden drops using an alchemy table and Dream Solvent, but even that can be costly because of how valuable Dream Solvent is.