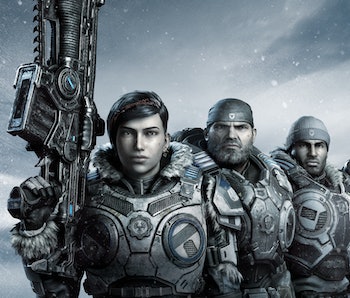 Gears 5 was a spiritual reboot to the 14-year-old Gears of War series that laid the foundations for a new generation of Gears games for many more years to come.

Besides the obvious name change seemingly inspired by The Fast and the Furious' reduction to Fast & Furious, Gears 5 shifted its focus away from JD Fenix to make Kait Diaz its protagonist, experimenting with an RPG element during a pivotal moment of the story. This change in direction, coupled with sharpened controls expected from any modern sequel, made Gears 5 the uncontested best Xbox exclusive of 2019.

As such, there should be more installments of the gruesome franchise. Here's everything we do know about the inevitable Gears 6.

When is the Gears 6 release date?

Microsoft has not confirmed Gears 6, so it lacks an official release date. Still, fans shouldn’t worry about whether or not there will be a follow-up. Gears 5 was declared Microsoft’s most successful first-party release since Halo 4 on Xbox 360, so a sequel is essentially guaranteed. When could that realistically happen, however?

Gears 5 hit shelves on September 6, 2019, three years after the release of Gears of War 4. If Microsoft keeps up that cadence, then Gears 6 could release as early as 2022. Microsoft might wait a while longer to release it, though, as The Coalition continues to support Gears 5 with new content.

In a blog post on May 10, 2021, The Coalition says it won’t be unveiling any new games for “some time.” As such, we can still expect that Gears 6 is years away at this point.

On which consoles will Gears of War 6 be released?

The Gears franchise is consistently released on both Xbox consoles and PC as part of Microsoft’s Play Anywhere program. There are no signs suggesting that Gears 6 will be any different, especially because Xbox has very few high-profile exclusives compared to its competitors.

The success of Gears 5 had on Xbox One makes it a pivotal title for Microsoft’s upcoming Xbox Series X console. The Coalition basically confirms that it will be a next-gen exclusive in a May 2021 blog post, where they confirm they’ll be switching to Unreal Engine 5 as the studio’s main game engine.

“As we look to future games, we’re excited to start shifting our resources to next-gen development using Unreal Engine 5,” the blog post says. “Gears of War has always been at the front of Unreal Engine development – as a breakout 720p title for Xbox 360 through last year’s 120FPS multiplayer update for Xbox Series X|S – and we’re excited to continue that tradition by developing on UE5 for multiple new projects in the coming years.”

Unreal Engine 5 tech demos have been stunning, so expect Gears 6 to look amazing when it comes out.

Is Rob Fergusson working on Gears 6?

Fergusson announced on Twitter on February 5, 2020 that he parted ways with Microsoft-owned studio The Coalition to head Activision-Blizzard’s Diablo franchise. He has played a pivotal role in every Gears of War game since the series’ debut in 2006. Microsoft has yet to announce whoever might replace Fergusson as the Gears 6 game director moving forward.

“I began working on Gears of War over 15 years ago and since then, it has been the joy of my life,” he wrote. “But now it’s time for a new adventure. I leave Gears in the great hands of The Coalition.”

While this is a pretty big loss for the studio, Gears of War will almost certainly grind on, especially now that Microsoft’s Xbox Series X is launched.

What is the plot of Gears 6?

Gears 5 leaves ample room for a sequel to continue the story of Kait and her squadmates. They only barely manage to fend off a brutal attack by the Swarm, a race of hivemind invaders that are the main antagonists in the series. The threat of this monstrous race still looms, as always, when the credits roll.

As Kait, Delmont “Del” Walker, and James Dominic “JD” Fenix enter the final battle of Gears 5, Kait is faced with an impossible choice: The team comes face-to-face with the queen of the Swarm, who happens to be a mutated tentacled humanoid of Kait’s mother, Reyna Diaz, who was captured by the creatures some time ago.

The Queen takes Del and JD hostage, and Kait only has time to save one of them. Kait frees whichever teammate players choose to save and is forced to watch in terror as the Queen snaps the neck of the other.

It’s possible that The Coalition will allow gamers to port their final save to the next Gears installment, similar to franchises like Mass Effect have done in the past. The Coalition will likely establish some kind of “canon” ending where one of these characters survives and the other dies, which is usually the case with these types of endings. Either way, this cliffhanger is too big to let sit for too long.

Hopefully, we don’t have to wait too long to find out.

When will we learn more about Gears 6?

Microsoft and The Coalition likely won’t share details about Gears 6 for some time. In May 2021, The Coalition explained that the shift to Unreal Engine 5 means that all of their games are a ways out and not getting announced anytime soon.

“Shifting to a new engine is a big undertaking, so we want to be clear that we will not be announcing any new projects or titles for some time,” the blog post explains while still highlighting that Gears 5 will continue to get post-launch support. As for the next mainline game in the series, don’t expect to hear about it until we’re closer to its release.

Gears 6 remains an unconfirmed inevitability for an Xbox console at some point in the future.

This article was originally published on Aug. 14, 2020