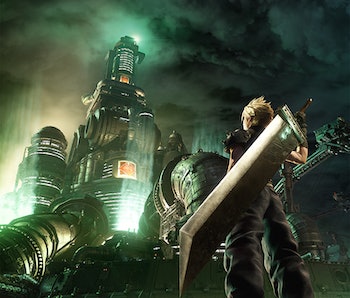 The PlayStation 4 exclusive Final Fantasy VII Remake features one of gaming’s most enthralling and iconic settings. The Mako metropolis of Midgar is full of seedy slums and sleek monuments to the formidable power of the Shinra Electric Power Corporation. Alas, there’s only so much to trek through. If you don’t own a PS4, you may not have even gotten to experience the latest version of Midgar.

If you're craving more epic adventures with a modern spin, we’ve curated seven titles that feature settings similar to FF7 Remake available on PS4, Nintendo Switch, and Xbox One.

We only recommend products we love and that we think you will, too. We may receive a portion of sales from products purchased from this article.

7. The World Ends With You: Final Remix

The World Ends with You: Final Remix - Nintendo Switch
Amazon

After completing his work on the original Final Fantasy VII and spending some time in the early aughts “perfecting” Kingdom Hearts, Tetsuya Nomura crafted The World Ends with You. Traverse an alternate version of Tokyo as Neku Sakuraba, a classic emotionally detached teen who has died. To return to the world of the living, Neku needs to survive a week-long ordeal known as the Reaper’s Game.

Nomura crafts some of his best character designs of all time, complete with an incredible soundtrack. The Nintendo Switch port is the most perfected version of the game, building upon the overhaul made when TWEWY was ported to mobile devices in 2012. The Switch edition includes new features like couch co-op and a new story epilogue.

If FF7 Remake’s vaguely apocalyptic setting, ostentatious weaponry, anime aesthetic, and questionable fashion choices appeal to you, NieR: Automata will hit every button you have and then some. NieR: Automata takes every mentioned thing to their highest point. You play as 2B, a questionably dressed anime android living in the year 11945, who needs to defend the nearly destroyed planet against an invading alien force.

The world is just as magical and advanced as Midgar. If you love the NieR world and gameplay, there’s so much content to get through. NieR has 26 distinct endings, which all vary in length. One ending could take a two-minute playthrough, another could take 15 hours. You’ll want to see all of them, too. Nier is equal parts introspective and absurd. It also comes with the DLC packaged in at no extra cost, in which you can battle Square Enix’s real world CEO Yosuke Matsuda. How can this game get any better?

Persona 5 was a game so nice, Atlus decided to release it twice. Royal is a re-release of the 2017 original with a boatload of new additions. The JRPG has added a third semester, rounding out a full calendar year to extend beyond vanilla P5’s truncated timeline. There are new Confidants, locations, activities, plot lines, and more dating sim/RPG hijinks. The re-release also comes packed with every bit of DLC from the original, so whether you’re a returning player or brand new to Persona 5, this game is worth your time.

Inverse gave P5R a 9/10, citing changes that made the game’s intricate relationship dynamics feel vastly more intimate. Persona 5 vanilla was a near perfect game somehow made better by the additions.

Imagine if somebody took FF7 Remake and said, “Let’s make this faster, sillier, and 100% more metal.”

The result would be Devil May Cry. This is the first entry to the main storyline in nearly a decade, so it’s immensely newcomer friendly. You’ll play as Dante, Nero, and V, each with their own distinct combat specialties. The high-octane fights are focused on crafting lengthy and stylish combos. Contemporary gothic tunes will play in the background as you defeat your foes. But make no mistake, this is not a serious game. The silliness and camppiness has been upped significantly from previous titles. If you purchase or upgrade to the deluxe edition, Every cutscene can be viewed in live action, as taken from the filming of the game’s motion capture.

Purchase Devil May Cry 5 if you’d like some silly anime gaming junk food to fill the void left by Final Fantasy VII Remake.

Remember the hustle and bustle of Wall Market with Don Corneo and all the underground gambling? Yakuza expands that premise into an entire game. You play as Kazuma Kiryu, the series’ longtime protagonist in his first adventure ever, set in the glitzy economic boom of the late 1980s, well before Yakuza 1. You’ll sometimes play from the perspective of Goro Majima, a fan-favorite recurring character in the series.

Despite the daunting number of Yakuza titles, this is the perfect entry point for newcomers to the series that blends over-the-top action with bizarre humor. You can explore recreations of real-life neighborhoods in Osaka and Tokyo, and help the protagonists gain control over their respective turf by getting into the cabaret business and the real estate market. You’ll stave off foes using your powerful fists and street fighting skills, and accidentally perform in a Michael Jackson video while you’re at it.

If you adored Midgar’s steampunk-y aesthetics, you’ll find a similar locale in Dishonored 2. It features a semi-modern city with a mix of medieval and contemporary technology. Published by Bethesda, it feels like Skyrim’s more narrative- and gameplay-focused cousin, trading the freedom provided in the Elder Scrolls for a compelling political thriller. An all-star cast including Sam Rockwell, Rosario Dawson, and Vincent D’Onofrio makes the story even more memorable.

Like Skyrim, it’s a first-person experience, but with a much heavier focus on tight gameplay. You can use stealth to sneak up on foes or tear through them with your magic and combat skill set.

If you left FF7 Remake craving more FF7 Remake, there’s no better panacea than Final Fantasy XV. Although it comes later in the series, FFXV is a prototype for much of FF7 Remake, thanks to its innovative real-time combat and distinct blend of linear narrative with (mostly) open-world gameplay. The Royal edition of FFXV includes every DLC out there for the game, including stand-alone stories for the main four cast members and the antagonist. Combine that with an enhanced version of the main story, and you’ll be able to play FFXV for far longer than you did FF7 Remake. When you’re done, there’s even an MMO mode called Comrades, where you can make your own character and play with friends.

If you’re still looking for games to play this year, check out our most anticipated PS4, Xbox One, and Nintendo Switch titles for 2020.