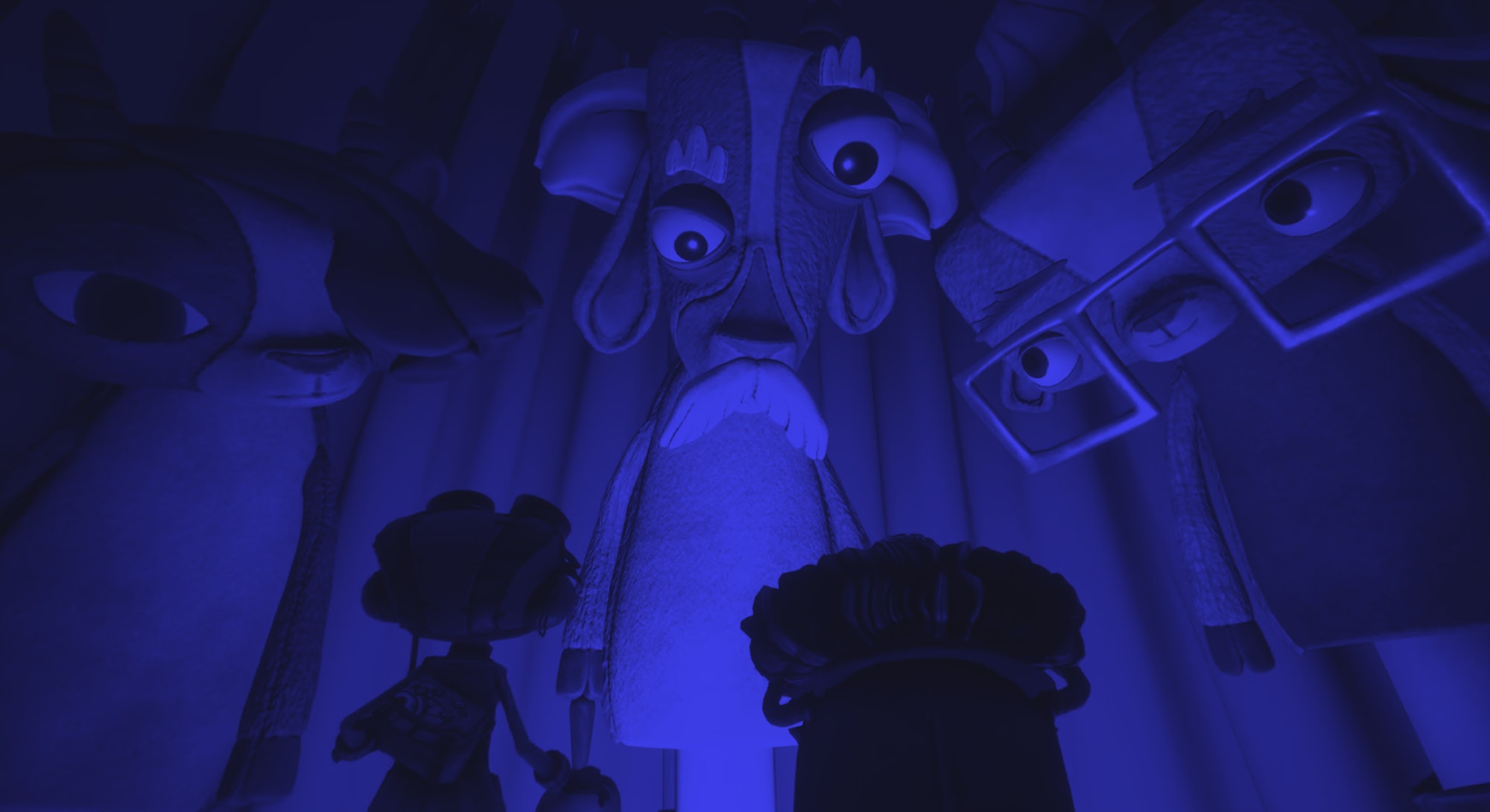 Around a third of the way into Psychonauts 2, players encounter Compton Boole.

He’s one of the founders of the Psychonauts, a group of people who can journey into the minds of others to help them resolve issues like addiction, PTSD, and — in Compton’s case — anxiety. Compton has always had trouble controlling his overwhelming psychic powers, so he has chosen to lock himself away in a Psychoisolation, where his psychic abilities don’t bother him and can’t hurt anyone again.

Compton’s overwhelming anxiety prevents him from living a fulfilling life with those he loves, as he instead chooses to wallow away in his own anxiety. After a severe panic attack induced by some bees, Raz, the player character, enters Compton’s mind, represented by a cooking game show.

Compton is tasked with cooking sentient ingredients that are eager to die into dishes under a strict time limit. These dishes are then presented to judges, who are hand puppets based on his friends Ford Cruller, Truman Zonatto, Otto Mentallis, and Hollis Forsythe. Initially, Compton is too anxious to do anything, so Raz has to help him, and Compton’s mental health issues are quickly reinforced through gameplay.

Players then platform around this cooking show set, preparing each ingredient before combining them into one meal. This is the only part of Psychonauts 2 with a strict time limit. Players will get nervous as they look for the right ingredients and the right areas to prepare them, putting the player in Compton’s headspace.

It’s a stressful scenario that initially stuns Compton, but he’s eventually inspired to describe each dish to the judges and then help Raz defeat them in the boss fight that ends the level. When you beat them, you’ll truly feel a sense of relief like Compton, who then chooses to help Raz and venture back out into the world.

Compton’s Cookoff was what made me fall in love with Psychonauts 2. Seeing how developer Double Fine discussed anxiety with wit, empathy, and clever gameplay mechanics quickly captured my heart. Now, looking back over the last 12 months, it’s still clear to me that Psychonauts 2 is the best game of 2021.

As someone who has dealt with bad anxiety for most of my life, I empathized with Compton’s struggles, even if they played out extraordinarily. The act of creating something and presenting it to your peers is a nerve-wracking experience, as is embracing friends and family when you feel nervous and overwhelmed.

Psychonauts 2 got me to step back and reflect on those complicated feelings and experiences, and it does so in a witty but respectful way. Compton’s Cookoff does seem like a nightmarish scenario for anxious people, but you’ll constantly be chuckling at the excited-to-die ingredients’ quips as you cook them and the funny responses from the judges.

Tim Schafer’s masterful writing gives the dark topic levity without taking away from the message. And this is just one level. You may connect with Compton’s Cookoff as much as I did, or you prefer another stage that resonates with your personal experiences. Thankfully, they’re all addressed with the same charm and care seen in Compton’s Cookoff.

2021 overall was an excellent year for platformers. Bowser’s Fury reminded us why we loved Super Mario 3D World and Super Mario Odyssey. It Takes Two features enjoyable cooperative gameplay. And Ratchet & Clank: Rift Apart demonstrated the power of the PS5. But this one stage shows how Psychonauts 2’s writing, themes, and gameplay all combine to craft a personal experience that you can connect with and never forget.

Psychonauts 2 is available on PC, Xbox One, and Xbox Series X|S via Xbox Game Pass. It’s even on PS4, even though Xbox Game Pass published it. If you haven’t given it a shot yet, make sure you try Inverse’s Game of the Year before 2021 is over.