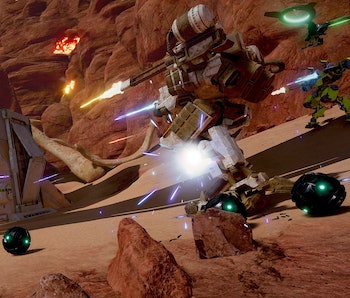 Tactical hero-shooter GALAHAD 3093 made a strong impression at PAX West 2022. It borrows from beloved competitive multiplayer games, offering a unique blend of mechanics that feel familiar yet fresh. It plays like a smart concoction of Overwatch and Rainbow Six Siege, with a bit of Armored Core sprinkled throughout. GALAHAD 3093 has a tremendous amount of customization, allowing players to select various loadouts and pilots, and its fluid gameplay is hard to put down. At PAX West 2022, Inverse went hands-on with GALAHAD 3093. Based on the few matches we played, we’re eagerly anticipating the full release. But what makes GALAHAD 3093 so much fun?

Come prepared for the fight

GALAHAD 3093’s strengths lie in its customization, allowing players to come to each battle with a Lance mecha that suits nearly any style. Each one has a unique special ability, like being able to temporarily turn invisible, along with a slew of other gadgets and weapons.

Throughout the demo, we experimented with several different Lances, from lightweight mechs that emphasize speed to the heavier tanks designed to deal and withstand lots of damage. Each has its own benefits, but the lightweight Lances were far snappier and feel more fluid when you’re maneuvering around each stage.

But the Lances aren’t the only customization options you have at your disposal: GALAHAD features eight Knights, the label given to the pilots, each with unique personalities and skills. These Knights are akin to the Operators in Rainbow Six Siege or the Legends in Apex Legends, each fulfilling a particular role with strengths and weaknesses. For instance, Arthur has the ability to call down an orbital strike, which is particularly useful when defending a capture point.

This allows for plenty of experimentation and variation while encouraging players to try out all the different builds available. The eight Knights, 23 weapon systems, and over 500 module options mean players will have plenty of options, with lots of incentives to improve and earn in-game currency (to buy more items).

Once you’re thrown into a match, which pits teams of 12 Lances against one another, the chaos ensues. In the PAX West 2022 build, we were able to participate in a traditional team deathmatch, or a domination mode (called Base Assault), and both were equally fun. The Base Assault was a bit more strategic, rewarding players for careful planning and positioning.

One interesting thing about Base Assault is that it contains control points that are only available to capture if you’ve destroyed nearby generators — at least if you plan on taking these points by yourself. The more teammates you have to assist in the capture, the fewer generators you need to destroy, rewarding teamwork or highly skilled solo play.

Firefights themselves are hectic, but exhilarating, with plenty of avenues for each player to secure an elimination. The time to kill (TTK) is on the slower side, so even if you get shot first, there’s a lot of wiggle room to still emerge victorious, especially if you make use of the plethora of abilities and powers, and have accurate aim.

There were several firefights I encountered where I thought for sure I’d lose, but thanks to a few well-placed mines, and perfectly-executed jumps, I was able to defeat my opponents, making the moment-to-moment gameplay all the more satisfying.

This game seems like it’s for players who want to put in the time to grind and earn unlockables. It goes far beyond simply offering a few different characters with a handful of abilities. So, with this in mind, it’s tough to recommend to everyone.

The sheer degree of customization options, from the weapons to the Lances, Knights, and modules can get overwhelming quickly, which could scare away potential players. You’re even able to completely modify the way your Lance looks, adding yet another degree of personalization.

To some, this may be a strength, but to others, a turn-off. Those wanting plenty of bang for their buck won’t be disappointed, but in its current state, it’s not approachable to all players.

GALAHAD 3093 is also a game that seems like it’ll take a while to master. With all the different loadout combinations, Knight abilities, and actual in-game mechanics, expect to sink dozens, if not hundreds of hours into this hero shooter if you want to be an expert.

Thankfully, developer Simutronics Corp. has worked closely with the community to make improvements throughout its early access life cycle, so we’re optimistic about GALAHAD’s future.

GALAHAD 3093 is available in early access on PC via Steam now.

More like this
Gaming
Sep. 14, 2022
Bayonetta 3 is far more ambitious than you expected
By Joseph Yaden
Gaming
Sep. 20, 2022
Harvestella rises above an overgrown field of farming sims
By Willa Rowe
Gaming
Sep. 19, 2022
Star Ocean: The Divine Force adds the series' most interesting mechanic yet
By Hayes Madsen
Related Tags
Share: