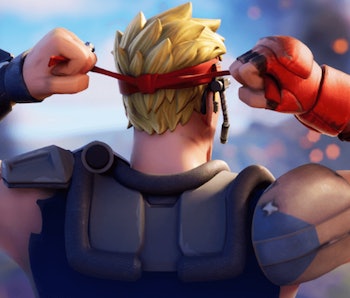 The latest season of Fortnite is in full swing. Players are tooling around with the new crafting system, taming wolves, and playing as iconic characters like Lara Croft. With Horizon Zero Dawn’s Aloy coming to the game, it’s already shaping up to be a particularly busy season for the battle royale game.

With any new season comes new challenges to complete. This time, players have to talk to Jonesy at different locations around the map. As is the case with any mission that requires finding an NPC, this can be a pain to figure out on the fly during a match. Luckily, you only need to talk to him in five different locations. Here’s what locations to drop right into so you can keep up with the Joneses in Fortnite.

First off, there are at least 10 different places you can find Jonesy in. Since you only need to talk to five, you can ignore most of the locations and just focus on the ones you know. We’re going to stick to five particularly simple ones here to save you the headache.

You’re looking for a sort of hologram of Jonesy, which makes him difficult to spot. Some of his forms can blend into the map a bit, so keep an eye out.

It’s also important to note that Jonesy won’t spawn in each location every time you load in. There’s a little trial and error needed here to track him down. So while we’re going over five locations, don’t be discouraged if you load in and he’s not there. Move on to the next and try again next round. With that in mind, here are five locations to check.

You can find one Jonesy in the facility at Slurpy Swamp. Looking at the map, you’ll want to head towards the northeast corner of the building. You’ll find yourself in a room with two big cats full of slurp juice. Head up the stairs and you’ll find Jonesy overlooking the vats.

From Slurpy Swamp, head slightly northeast into Weeping Woods. Head into the center of the green, forested area and look for the playground. You’ll find Jonesy hanging out among the jungle gym and ride-on dinosaurs.

You’ll want to head towards the north side of Coral Castle to find this Jonesy. You basically want to go to the last sandbar at the top of the area. You’ll find a scuba gear-clad Jonesy hanging out in a little puddle of water on the sand.

Find Steamy Stacks on your map and then look just north of it to find a tiny island off the coast. He should be easy to find once you land there since the island is so small. Look for him wandering the coast like Tom Hanks in Cast Away.