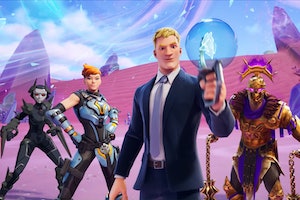 things to do before Season 6

Fortnite Chapter 2, Season 6 is less than a week away!

Epic Games has already begun teasing the new season, which will begin with a single-player experience featuring Season 5 protagonist Agent Jones. While Fortnite has an exciting future ahead of it, there is still quite a bit the most avid players need to get done before the start of Season 6. Because whenever a season ends, its exclusive rewards disappear — in most cases forever.

Most of these rewards are connected to this season’s battle pass. First off, you should try to complete it fully as players are rewarded with “The Child Back Bling” based on Baby Yoda at level 100. Even after level 100, Fortnite players can rank up and unlock Crystal Styles for some skins.

If you want these additional style options for Kondor, Mancake, Mave, Menace, and Reese, you need to play the game more, complete their Style Quest, and unlock them before Season 5 officially ends.

While you’re clearing out the battle pass, also make sure to complete any extra quests that are part of it, like The Mandalorian’s Beskar Quests. You’ll then be able to keep the complete version of your favorite Fortnite Chapter 2, Season 5 skin.

2. Spend all of your Gold Bars on Exotic Weapons

In Fortnite Chapter 2, Season 5, players could get a new type of currency called Gold Bars by completing bounties. These Gold Bars could then be spent to either recruit NPC characters to fight alongside you or buy Exotic Weapons from them to get an edge in a game. Epic Games has confirmed that every player’s cache of Gold Bars will be reset at the end of Season 5.

As such, the developers are encouraging players to spend all of the Gold Bars that they do have over the next week. Additionally, the prices of exotic weapons have been lowered so you should be able to get something with whatever Gold Bars you have left. If you ignored your Gold Bar cache all season, you need to spend it soon.

1. Get the Breathless Blades Pickaxe

One of the most important items you can get before the end of this Fortnite season is the Breathless Blades Pickaxe. This was initially available through the Hearts Wild Team Battles, but players actually have another chance to get it before the end of this season. Players will simply have to complete the Epic Quests for either Fishstick or Lovely.

This requires you to complete all of the quests both ask you to do by default, and it’s manageable, even with just a week left. Obviously, any other challenges or quests running this week with special rewards will also reset once Season 6 begins. It's possible to complete these quests within the next week, and you’ll be rewarded with an exciting item if you do so. You have just under a week left to unlock all of these things, so get to playing.