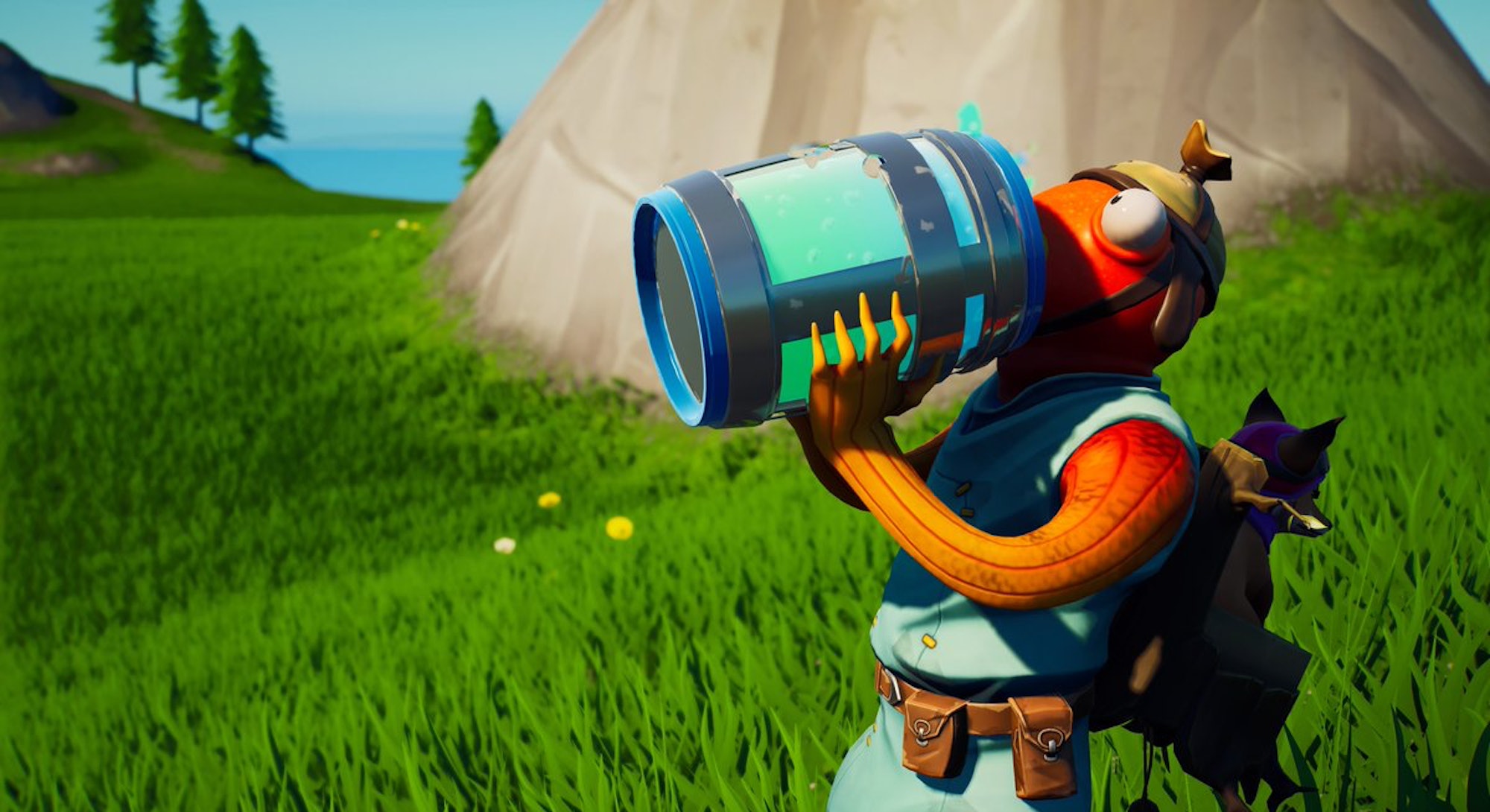 “Number one victory royale / Yeah, Fortnite we ‘bout to get down (get down).”

Depending on how dialed in you are to the internet these days, those words either mean nothing or have just gotten a tune hopelessly stuck in your head. TikTok users can’t stop posting about a bizarre song called “Chug Jug With You” that rewrites the lyrics of Estelle’s banger “American Boy” to be about the battle royale sensation Fortnite. And that’s not even the strange part.

Imagine, if you will, a “Weird Al” Yankovic style parody of a 2008 pop hit with lyrics that name check the digital currency V-Bucks and virtual locations like Tomato Town. Now replace “Weird Al” with a squeaky child’s voice that cracks under the pressure of Estelle’s “la la"s. The singer mostly stays true to the original song’s melody, except when he tries to force a few extra syllables in with comedic results. At one point, he tries to end a verse with, “I’m a cool pro Fortnite gamer,” which ends in a melodic disaster.

Whether or not it’s sincere or a self-aware joke, TikTok users don’t seem to care. People can’t stop posting videos featuring the earworm, and they’re racking up millions of views for it.

So, where did "Chug Jug With You" come from? That’s a complicated question, as it turns out. The answer requires a deep dive into the communal world of meme-making, where the line between sincerity and irony is so razor-thin that a cringey joke can become a pop culture sensation people can’t help but enjoy.

“Take me to the zone”

While the song first debuted in 2018, it’s having a second resurgence now on TikTok (despite the fact that the Chug Jug isn’t even in Fortnite anymore). Search “Chug Jug With You” on the app and you’ll find some staggering viewership numbers. One viral post with over 2.7 million views just features the audio from Leviathan’s song as the lyrics scroll by. Another popular post comes from a Willy Wonka cosplay account with 18 million followers. The video features a user dressed as the fictional chocolatier lip-syncing the lyrics to the tune of 5.4 million views. Many videos playfully make fun of the song, but others genuinely seem to enjoy it.

“Bro why does it slap?” asks one TikTok commenter.

A large portion of the song’s success can likely be chalked up to “American Boy” itself, a Grammy-winning bop with strong, melodic hooks. Throw in some clever lines about Fortnite, and you end up with a song that sits firmly at the cross-section of irony and sincerity. It’s the kind of cringe-worthy shitpost that the internet loves to joke around about. And yet, it is undeniably catchy.

At a cursory glance, the origins of the parody seem pretty simple. Type “Chug Jug With You” into YouTube and you’ll find a video by a user named Leviathan from 2018 with 1.7 million views. The channel has a handful of uploads, all of which are Fortnite parody songs with a few remixes. Case closed … right?

The twist here is that Leviathan’s song isn’t actually the first iteration of the meme. When Inverse spoke to Leviathan over Discord to clarify the song's origins, he explained that it was adapted from another viral post by a user named CM Skits. That 17-second video only features the chorus sung in an exaggerated falsetto as a hyperactive teenager dances in front of green-screened stills from the game.

Since 2018, the CM Skits video has attracted 80,000 views. It caught the attention of then 13-year-old Leviathan who went on to write full lyrics and double down on the original’s exaggerated vocals. After racking up 100 thousand listens on SoundCloud, Leviathan uploaded it to YouTube, where it gradually started picking up steam. The song had a moment of virality in 2018, with most of the video’s nearly 2 million views coming in January 2019. Caught off guard by the song’s success, Leviathan reached out to CM Skits in February 2019 to make sure they were cool with the adaptation.

CM Skits is a bit of a mysterious figure in all of this. According to his now-inactive Twitter account, the memester ran an Instagram page with over 45 thousand followers that was deleted by the platform. CM Skits has since relocated to TikTok and is making content regularly again with just under three thousand followers. While this wave of Chug Jug fever is far removed from the original video, CM Skits did make a surprise return to YouTube this week to reclaim their Fortnite parody crown — capitalizing on a trend that he started in the first place.

“The storm is coming fast”

The more you dig into the song’s history, the more you’ll find an avalanche of convoluted viewership statistics. The CM Skits video has 79,000 views on YouTube, while a reupload of it from another user has 840,000. Meanwhile, a 10-hour loop of the short clip has over 3.2 million views, which is more than Leviathan and CM Skits’ videos combined. The phenomenon speaks to the chaotic nature of meme culture on the internet.

Memes themselves are more often than not hilariously complicated. It’s almost always impossible to track down patient zero for any given viral trend. Even sites like Know Your Meme that specialize in exhaustive internet tracking can’t always find the true origins of the most popular memes.

Just take this past Sunday’s Super Bowl LV Halftime show, which instantly spawned a joke based on The Weeknd’s gold-tinted performance when he's bumbling through what looks like a hall of mirrors. Verified Twitter user @RyanSchocket seemed to be first to the punch by posting screenshots from the show, but multiple posts came minutes later with the now-iconic video clip attached. Did Schocket inspire the subsequent template or did the collective groupthink simultaneously will it all into existence? Nobody can really take credit for that moment. It belongs to everyone and to no one in particular.

The same idea applies to “Chug Jug With You.” It’s Leviathan’s song that these popular TikToks are iterating on, but even that source material is an iteration in itself. That’s not to mention that the actual song is a parody of another song, borrowing its music and melody to transform it into something new. All of that creates a sort of inscrutable Chugception.

Part of TikTok’s success is that it builds that idea into the app itself. The Duet feature makes it easy for users to expand on someone else’s content and make it their own. Many of CM Skits’ posts use the feature to put their own stamp on other users’ videos, not unlike the original Chug Jug clip did with “American Boy.”

Meme-making is a bit like improv comedy (and not because it’s only funny to the performers involved). Someone lays out a prompt, but the actual fun comes from comedians bending the scenario in the wackiest ways possible until you can’t remember where the routine even started. “Chug Jug With You” is so far removed from the original 17-second version that it’s not even about Fortnite anymore; It’s just a setup for someone else’s joke, but at least it leaves all of us laughing.

But are we laughing at this song or with it? On TikTok, it's often impossible to say for sure.