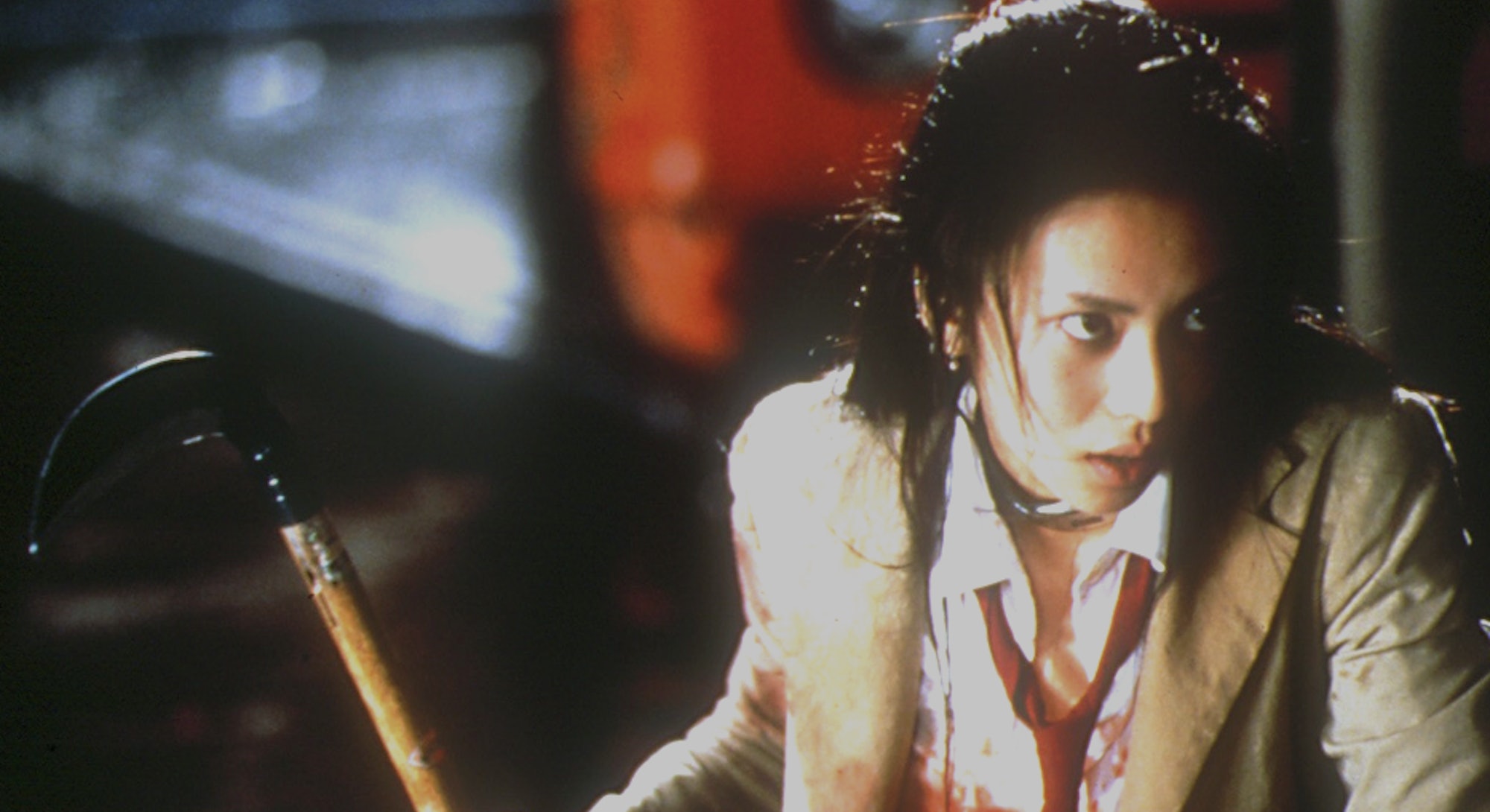 “At the dawn of the millennium, the nation collapsed.”

Battle Royale's opening scrawl introduces audiences to what would become (and still is) the ultimate cinematic deathmatch. With the nation corrupted by juvenile anarchy, a callous government resorts to a terrifying solution in a violent dystopia like no other: Battle Royale.

Like a Y2K Lord of the Flies, Battle Royale pits a class of school students against each other with a single, fatal promise: kill all your friends, and we'll let you go free. It remains as notorious today as it did the day it was released: December 16, 2000.

Effectively barred from the United States for over a decade in the wake of the Columbine school shootings, Battle Royale was every bit as sensational in its home nation as it was abroad. Politicians called for it to be banned, while the press sought to blame it for every violent crime committed by a minor in the years that followed. For veteran filmmaker Kinji Fukasaku, it was a necessary swipe at a government that had done little to support a generation bereft of opportunities during Japan’s '90s economic crisis. But in the eyes of its cast members, Battle Royale was more than the filmmaking sin the authorities made it out to be.

A slice of wild escapism from the real social issues confronting schoolchildren in early 2000s Japan, Battle Royale was, to the young women that starred in it, an “immense,” career-defining experience. With production unfolding over six months across the course of the summer holidays, the film offered a real sense of community, direction, and inspiration at a time when juvenile crime had come to dominate the news. And while its shocking content will always be central to its infamy, nothing surpasses the sense of opportunity the film granted a pair of teenagers still making sense of the world in late '90s Japan.

But for Aki Maeda, speaking fondly via Zoom, her role as the film's "ordinary" and "introverted" female lead felt like a natural fit. She was the youngest member of the cast — just 14 years old at the time of filming — and her character would be a relatable center-point for many people her age in Japan's tumultuous late '90s.

"I got bullied at school," she tells Inverse. "One day, I realized that everyone was ignoring me. Even the people who had normally been friendly with me were not allowed to talk to me because the 'leader' said so. I was completely invisible. I just had to accept it."

For Shibasaki, speaking via email, life before Battle Royale was similarly uneasy. Her mother had died before the production began. “My private life at the time became difficult," she says. "I got sick of my friends, and I became more withdrawn."

Kinji Fukasaku: a force to be reckoned with

In a move that seems at odds with the film's events, joining Battle Royale offered the kind of respite that other kids could only dream of. The concept had already proved a smash hit as Koushun Takami's novel sold over a million copies upon release in 1999, while Maeda recalls reading the popular manga series, as well. But with one of the country's most revered filmmakers taking up the helm for the movie adaption, this would prove an experience like no other.

Fukasaku was 70 years old at the time. Battle Royale was his swan song, a final cinematic explosion to be remembered by. His presence on set proved more inspiring than anything else.

"As soon as filming started, he'd be swinging his walking stick around and shouting at people," Maeda laughs. "He was really demanding, and we filmed all through the night, which was very stimulating for a 14-year-old! You couldn't stop until you dropped dead — literally. But I saw his passion right before my eyes, and that really gave me a sense of direction for myself as a person."

Shibasaki mirrors the sentiment: "The joy of being able to express this violent character with the director — who had more energy than the actors who were the age of his grandchildren — beat everything else."

The atmosphere among the cast and crew was equally special.

"It felt like actually being in a school," says Maeda. She acknowledges the pivotal class briefing scene as a particularly memorable sequence — it took a full week of rehearsals with all 42 "classmates" to get right, with Fukasaku changing things up constantly.

"Love was born on that set," remembers Shibasaki of such scenes. "We would gossip, go to karaoke, and we even went to watch the band of one of the actors together."

In a film where your importance effectively equates to how many people you kill, everyone wanted in on the violent scenes. Shibasaki did well in that regard — and she cites Mitusko's climactic showdown with the serial killer Boy #6, Kazuo Kiriyama (Masanobu Ando) as one of her favorite scenes. She doesn't hesitate when asked what her tactics would be if she could do it all again, though. "Shooting from distance," she says readily. "I'd be a sniper."

Maeda, on the other hand, managed to go the entire film barely laying a finger on anyone. "I was so envious of everyone else," she admits. "My character never had any violent scenes or anything! Everyone else was so cool — they had action advisors and were talking intensively about how to perform. I spent the whole time watching them and just feeling jealous!"

Maeda's sole violent face-off, though, is ultimately the most significant: a showdown with the tournament's villainous orchestrator, Kitano. Perhaps the film's greatest marketing asset was that this pivotal, antagonistic role would be played by one of the most famous TV personalities in the country — bridging a vital gap between the fictitious story on screen with the real world. (Imagine Jimmy Fallon played the organizer of the Hunger Games.)

As Maeda recalls, coming up against Takeshi Kitano — stand-up comedian, game show host, and influential film director in his own right — was a genuine highlight.

"I was so nervous,” she says. “When you turn on the TV — Takeshi is there. He's that famous. It's difficult to explain to people in the outside world, but he really was the face of TV around that time. Kids would mimic what he did on his comedy shows, and I remember the motorbike accident he had in 1994 being huge news in Japan."

But when it came to shooting their first scene together, a dreamlike sequence where their characters walk along a riverbank eating ice lollies, the tension was offset pretty quickly.

"Kitano couldn't remember his lines at all," Maeda laughs. "We started writing on this huge paper, and the crew had to hold it behind me for him to read off-camera. It really shocked me! It's a Kinji Fukasaku movie, everybody remembers their lines, right?"

The impact of Battle Royale, upon release, can hardly be overstated. It's a film that combines brutal axe murders with katana beheadings, that depicts teen suicides and cold-blooded betrayals, that puts an uzi in the hand of a school-aged psychopath. And yet, despite the controversy, it grossed over three billion yen (around $30 million) at home, where it was the third-highest grossing movie of 2001 behind Spirited Away and Pokemon 4Ever.

"The film was really, really scandalous in Japan," recalls Maeda. "They actually discussed in parliament whether to show it in the cinemas or not." Shibasaki remembers being shocked at the backlash too: "This was not just a slaughter movie, it's about the will of young people struggling to change their situation as they resist the rules decided by adults."

Director Fukasaku was dismayed at the eventual ruling over the film, believing that those in charge had missed the point. He encouraged children to sneak into the cinemas after it was handed a rare R-15 rating over fears that the movie would inspire a wave of copycat crimes.

It meant that Aki Maeda — the film's lead — could not see it in the cinema herself. She returned to her parents' home and continued school after filming finished, and while her parents' had a huge amount of respect for the director, she remembers "they didn't actually say 'I'm pleased that you're in it.'"

For Shibasaki, watching the film with her father proved a more poignant experience. "He was surprised at the content, but he was proud that I was a part of it. After watching, he told me he wished he could have shown it to my mom."

Though twenty years have passed, both Maeda and Shibasaki are still only in their thirties today. And while they're old enough to have kids of their own, they are still, themselves, in the midst of vibrant careers in 2020.

Maeda has enjoyed a rich spell in TV dramas and on stage. Her latest play, about classical composer Beethoven, kicks off this week in Japan, while a 2019 production of Chekhov's Platonov saw her reunite with Battle Royale co-lead Tatsuya Fujiwara (Boy #15, Shuya Nanahara). "This time, we played husband and wife!" she laughs.

Meanwhile, Shibasaki has worked with everyone from cult director Takashi Miike to Keanu Reeves across a vibrant career in film that will continue with the release of Moeyo Ken in 2021. If it wasn't for her busy work schedule, she might have appeared in Kill Bill, too. "I rushed into the auditions with all this make-up on, when the character was supposed to be more like a high-school girl." Quentin Tarantino — an avid fan of Battle Royale — would ultimately cast Shibasaki's co-star Chiaki Kuriyama (Girl #13, Takako Chigusa) the role of ball-and-chain-wielding femme fatale Gogo Yubari, instead.

Looking back on the past twenty years, it's clear the production is full of fond memories. "Battle Royale changed everything," Maeda concludes. "Having had the opportunity to watch it again, it made me realize how much I love film."

And while she acknowledges the limited opportunities for young people in the wake of the pandemic, she hopes that viewers today will feel just as inspired by the film's rebellious spirit, even in the face of oppression. For her, at least, the release made one thing sure — the bullies certainly left her alone after that.