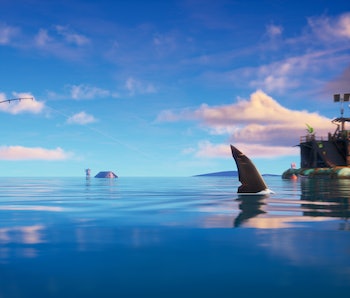 Following a bombastic Doomsday event that turned the Storm into a tsunami, Season 3 of Fortnite Chapter 2 has begun. This season, which has been titled Splashdown, comes with a fairly obvious aquatic theme that involves Loot Sharks, a lively Supply Llama replacement that not only carries great loot, but you can ride them as well.

For anyone looking to step by step process will walk you through finding them and getting everything you can out of them.

Step 1: Track Down a Loot Shark

Unfortunately, Loot Sharks don't seem to have pre-set locations like the bunkers in Call of Duty: Warzone. But if they're anything like Supply Llamas or Chests in Fortnite. Some of the map is now flooded with the start of Season 3, and you can find the Loot Sharks swimming around the map in areas like Sweaty Sands.

In order to find one, take a boat or walk alongside the body of water until you see a fin sticking out of the water. Those fins guarantee that you'll run into a shark, rather than a fish or whirlpool. Once you find one of the aquatic beasts, you can decide if you want to have some fun and ride this new Fortnite vehicle before killing it for loot.

The shark will attack you if you approach it directly, but if you have a fishing rod, this optional step will let you ride it. Throw a line out towards the shark, and it should eventually bite. Once this happens, your player will hop on a pair of jet skis and you can fully control the shark — just like in the new season's launch trailer.

While this isn't the most practical vehicle, it will still get you around the map very fast and can even be used to move sharks to the locations required for certain challenges, like killing a shark in Sweaty Sands. For the real reward though, you'll want to fight the shark.

Step 3: Fight the shark and claim your loot?

In order to get loot from the sharks, you will have to kill them. They're far from docile and will fight back against all of your attacks. Sharks have a lot of health, so it may be smarter to fight them with friends if you aren't playing in Solos. Sharks also can jump out of the water to attack you and will deal some heavy damage. They'll also destroy the breakable environments around you.

Once you and your squad are kitted out with enough gear, ranged weapons, and ammo, take on the shark and try not to get killed as it lunges at you, even if you're on land. Pump enough lead into it and you will get some loot, which are typically rarer weapons and ammo. As with riding the shark, fighting it may not be the easiest way to get more loot for your character, but it's a cool new feature unique to Fortnite Chapter 2 Season 3 that everyone should try at least once.