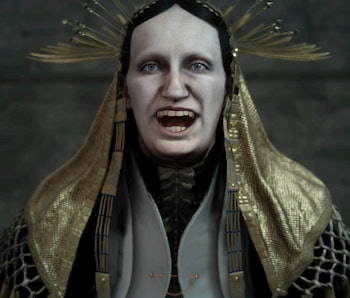 Sometimes you just need a quiet moment to yourself. However, more and more games nowadays seem to think that what players need the most is a companion who will incessantly talk your ear off, whether you like it or not. A solution to this problem is possible and one example comes from maybe the most unexpected source: Forspoken. Despite early impressions of cringe-worthy dialogue, Square Enix’s latest RPG also has a must-have feature for games going forward: a banter slider.

Cuffing season — Throughout Forspoken, Frey’s constant companion is the talking cuff named ... Cuff (no points for originality here). From the game’s opening moments, the two establish a comedic rapport of nearly endless banter that seeks to entertain the player as they traverse the world with magical parkour.

An early criticism of Forspoken was against the tone of the dialogue as seen in trailers and previews. It can be described as Whedon-esque, which to be clear isn’t a compliment. Even though the full game manages to escape this eye-roll-worthy tone for the majority of the playtime the banter between Cuff and Frey is still constant and not always as humorous as it thinks. Thankfully the game gives the player the ability to put a stop to this.

In the Accessibility Settings, under the Cuff Settings subsection, there is an item called “Cuff Chat Frequency” with four different levels from Minimal to High. Each level changes how much Cuff and Frey banter while moving through the world and offers a welcome chance to enjoy the world of Athia in silence, something that more games could use.

Talking heads — In recent years the quippy companion has seen a meteoric rise in AAA games. Companions have often been a part of video games, but recently they just seem to be a lot chattier than they used to be.

Take God of War Ragnarok for example, a game filled with multiple companion characters who cannot shut up about their backstory and every one of their issues or prematurely give you solutions to puzzles. I mean come on Freya, just get a good therapist like everybody else.

A common criticism of Ragnarok was that despite its epic story the moment-to-moment gameplay felt tiresome solely due to how talkative the side characters were. The game never gives you time to just take in the world around you without someone chiming in with their thoughts. Forspoken is a great alternative to this problem thanks to creating a setting that players can adjust in order to control how much banter they hear. Like any accessibility setting, the point is not to force players into something but rather to give people the ability to play a game how they want to.

Forspoken is not the first game to have this banter setting. High on Life gives players the choice of how often the talking gun chatters to the player, which is helpful given that the tone of High on Life can be offputting depending on your comedic tastes.

The inclusion of these banter settings could be the cure to the cringe-worthy dialogue of many AAA games, but there is more potential behind these settings. Imagine a setting for JRPGs that silenced relative dialogue from party members during combat. What a dream.

Forspoken launches on January 24 for PS5 and PC.