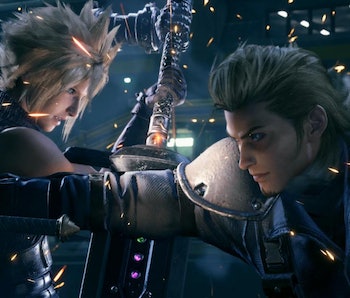 A new PC port for Final Fantasy VII Remake may very well be one of the roughest AAA ports released in quite a while. This is especially surprising considering the stellar PlayStation 5 port of the game released earlier this year, Final Fantasy 7 Remake: Intergrade. How did this even happen? Where did we all go wrong? Let’s dive in.

What Happened — Final Fantasy 7 Remake was released on the Epic Games Store for PC on December 16, one week after its surprise announcement at The Game Awards 2021. Right out of the gate, Digital Foundry’s Alexander Battaglia reported some abysmal performance issues on Twitter.

Twitch Streamer Maximillian Dood encountered a ton of stuttering while exploring the Sector 7 Slums on stream, playing on a GeForce RTX 3090. (For context, the RTX 3090 was released in September 2020, and is a powerful card that can handle games at up to 8K and 60fps.) It’s also one of Nvidia’s more expensive cards, starting at $1499.) If everything is optimized correctly, there’s no reason it shouldn’t be able to handle something like Final Fantasy 7 Remake.

Here’s the official trailer for the Intergrade PC port.

While Digital Foundry will have a full video on the port later this week, Battalgia summed up his thoughts in a thread on ResetEra by saying, “This is literally the worst AAA release I have seen on PC in a good long time. I humbly submit that no one should buy it.” That same thread is filled with other players noting the issues they’ve run into.

Outside of some major performance problems, the port also has some barebones control options, with no way to tweak anti-aliasing, toggle Vsync, control motion blur effects, and more. It’s incredibly surprising to see a port with so few options, especially when it’s one of the first Epic Games Store titles to cost $70.

Square Enix’s tenuous history with PC ports — It’s hard to say just what went wrong with Final Fantasy 7 Remake, but this certainly isn’t the first time one of Square Enix’s ports has left a lot to be desired.

In 2017, the PC port of NieR: Automata had similar disastrous problems, including a variety of game crashes, a locked 30fps, and a distinct lack of adjustable options. Digital Foundry also did a video about the NieR: Automata port at the time.

Similarly, in 2018 Square Enix released a PC port of the mobile version of Chrono Trigger, which was also riddled with problems: a lack of control mapping, resolution locking, and strange blurriness to the overall graphics. The Chrono Trigger port took five months and a series of patches to fix, but NieR: Automata didn’t get a proper fix until nearly four years later in July 2021.

There are other examples of Square Enix’s poor PC ports, but on the flip side, the studio has also put out solid ones. The recent PC port of Marvel’s Guardians of the Galaxy doesn’t have any of the problems plaguing Final Fantasy 7 Remake. Final Fantasy XV also received a substantial PC port in 2018 that came packed with adjustable options and features, as well as official mod support right out of the gate. The one thing that becomes clear from looking at the big picture is that there’s serious inconsistency when it comes to Square Enix’s PC ports. Final Fantasy 7 Remake is one of the publisher’s biggest games ever, and its arrival on PC should be a watershed moment.

The PC port’s quality may simply come down to the team working on it and how familiar they are with the technology. For example, Marvel’s Guardians of the Galaxy had a studio named d3t working alongside Eidos-Montreal for the PC port. Looking at d3t’s website, the studio has a long history of working on PC titles like Company of Heroes, Lawbreakers, and Alan Wake Remastered.

For Final Fantasy 7 Remake, all we know is that the PC port was developed in-house at Square Enix. It’s hard to say exactly what went wrong without knowing more about development, but it’s still shocking that a port released exclusively on the Epic Games Store, of a game developed on Unreal Engine 4, would be this rough. After all, this is a game that has a lengthy post on Unreal’s official site about how the team used the engine.

What’s Next — In the coming weeks or months, we’ll undoubtedly see more options and fixes, as Final Fantasy 7 Remake is a key focus for Square Enix right now, especially with Part 2 in the works. According to a datamine, the PC files for the game also reference a Steam release, so it’s possible the game will be in a much better state by the time that happens.

The big question now is if Square Enix will address these issues in a timely manner, or if fans will be left in the lurch for months, hopefully not years, like with past titles such as NieR: Automata.